Astrotheology: The Sun of God

The fact that our Judeo-Christian mythos is a derivation of earlier religions and legends has moved into the mainstream, and the idea that the divinity of Jesus has parallels with other gods is no longer a shocking idea.  Most of us realize now that Jesus wasn’t born on Christmas day – shepherds don’t watch their flocks in December, even in ancient Judea – and that the Christmas holiday was adopted because it was already being celebrated as the Winter Solstice in the pagan world.

The Winter Solstice is celebrated as the time when the dying god (the Sun) is resurrected again – the Sun is reborn and the days begin to lengthen.  From the book The Christ Conspiracy:

# The sun “dies” for three days at the winter solstice, to be born again on December 25th.

# The Sun of God is “born of a virgin,” which refers to both the new or “virgin” moon and the constellation of Virgo.

# The Sun’s “birth” is attended by the “bright star,” either Sirius/Sothis or the planet Venus, and by the “Three Kings,” representing the three stars in the belt of Orion.

# The sun at its’ zenith, or 12 noon, is in the house or heavenly temple of the “Most High;” thus, “he” begins “his father’s work” at “age” 12. Jordan Maxwell relates, “At that point, all Egypt offered prayers to the “Most High God.”

# The Sun enters into each zodiac sign at 30 degrees; hence, the “Sun of God” begins his ministry at “age” 30. The Sun of the visible heavens has moved northward 30 degrees and stands at the gate of Aquarius, the water-bearer, or John the Baptist of the mystic planisphere, and here begins his work of ministry in Palestine.

# The “Sun of God” is the “Carpenter” who builds his daily “houses” of 12 two-hour divisions.

# The “followers” or “disciples” of the “Sun of God” are the 12 signs of the zodiac, through which the Sun must pass.

# The “Sun of God” “changes water into wine” by creating rain, ripening the grape on the vine and fermenting the grape juice.

# The “Sun of God” “walks on water,” referring to its’ reflection upon the waters’ surface.

# When the “Sun of God” is annually and monthly re-born, he brings life to his former self, raising it from the dead.

# The “Sun of God” triumphantly “rides an ass and her foal” into the “City of Peace” when it enters the sign of Cancer, which contains two stars called “little asses,” and reaches its’ fullness.

# The “Sun of God” is the “Lion” when in Leo, the hottest time of the year, called the “throne of the Lord.”

# The “Sun of God” is “betrayed” by the constellation of the Scorpion, the backbiter, the time of the year when the solar hero loses his strength. [NOTE: This is also the origin of the term backstabber, which also indicates betrayal].

# The “Sun of God” is hung on a cross, which represents its’ passing through the equinoxes, the vernal equinox being Easter [from the pagan festival Eostre].

# The “Sun of God” darkens when it “dies.” The solar god as the sun of evening or autumn was the suffering, dying Sun, or the dead sun buried in the netherworld.

# The “Sun of God” is the “Light of the World” and “comes on clouds, and every eye shall see him.”

# The “Sun of God” rising in the morning is the “Savior of mankind.”

The Sun has been worshipped since the beginning of time as the bringer of life, and the movements of the Sun create the solar cycle – the wheel of the turning of the seasons that corresponds to the astrological cycle of the Sun through the cardinal signs.   At the (northern hemisphere) Winter Solstice the Sun enters Capricorn, to be followed by Spring when the Sun enters Aries.

So as we approach Christmas this year, I offer respect and honor to the Sun that brings and maintains life and light to the world.  And peace be with you all!

December 21, 2013
Venus turns retrograde at the Winter Solstice
Next Post

December 27, 2013 For the retrograde: The renegade Venus
Browse Our Archives
get the latest from
New Visions
Sign up for our newsletter
POPULAR AT PATHEOS New Visions
1 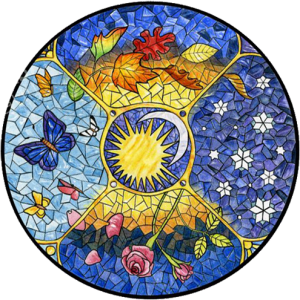 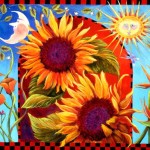