John McCain Will Never Be President 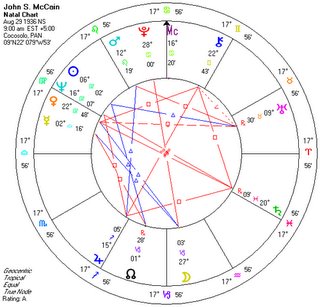 John McCain works hard to maintain his image as a consensus builder. With Libra rising, and Mercury in Libra, the sign of balance and relationships, he struggles between his need to please others (Libra) and his Virgo sun which strives for authenticity and perfection. Virgos dislike the flattery and superficiality required to negotiate and capitulate; they tend to avoid the spotlight and prefer a quiet corner where they can utilize their famous discrimination to continually perfect themselves and their work.

Mr. McCain has Saturn retrograde, a placement that causes Saturn’s critical voice to turn inward. Individuals with this placement tend to be insecure and more dependent on the approval of others than they might otherwise be. Saturn opposes his Venus, demonstrating that he doubts his ability to really relate to others. With his Venus in Virgo, he may be secretly critical of those he must deal with from day to day despite his Libra rising need to placate and cajole to maintain alliances.

McCain has a Grand Cross in the “mutable” signs (Sagittarius, Virgo, Pisces, Gemini). The astrological signs have three different “qualities”: Cardinal, offering leadership and action; Fixed, offering stability and organization; and Mutable, offering flexibility and adaptation. A Grand Cross is a challenging aspect in which four planets make 90 degrees to each other, with two pairs of planets in opposition to each other. Typically there is a buildup of tension with this configuration which promotes change and transformation within the individual, but with the Mutable Grand Cross this energy is never focused and tends to create distress and tension within the individual unless there is a motivating force that provides momentum. Without such a force this person will tend to waffle and become distracted. At his core, Mr. McCain has not yet resolved his inner sense of failure expressed through his retrograde Saturn and is well known for his apologetic tendencies.

Mars in this chart is in Leo, a fiery and dramatic expression of aggression, and is square Uranus, the revolutionary. McCain’s Virgo Sun and Libra ascendant (rising sign) and Mercury will do their best to suppress his anger, making its eruption all the more dramatic when it occurs. This imbalance in his ability to assert himself in a strong and confident way will prevent his ability to command the kind of respect required to win a presidential election.

November 23, 2005 Jupiter Trine Uranus Today
Browse Our Archives
get the latest from
New Visions
Sign up for our newsletter
Related posts from Astrological Musings

Boost Your Immunity Using Energy Principles
Our modern world is a miracle of interconnectivity. We can easily stay...
view all New Visions blogs
Copyright 2008-2020, Patheos. All rights reserved.