The arrest of George Zimmerman and the healing of wounds in the US Sibly chart April 12, 2012 Lynn Hayes 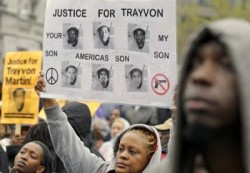 The shooting of Trayvon Martin has made national headlines in the United States and in a country that likes to think of itself as being “beyond race” this story has brought the matter of racial bias and injustice to the front page of American news.

George Zimmerman was arrested yesterday just as Mars, planet of aggressive force, changed direction to turn direct.  Because this case has had so much impact on the American discussion I wanted to see if there were any significant connections between the charts of George Zimmerman and Trayvon Martin and the generally accepted chart for the US, the Sagittarius rising “Sibly” chart.

In order to assess the effect these individuals are having on the evolution of the United States I examined the progressed charts for all of the players using the information available  without accurate birth times.  Trayvon Martin’s progressed Saturn was exactly quincunx the progressed Moon in the US chart, demonstrating the challenge (Saturn)  to the emotions (Moon) of Americans in a struggle that, like the quincunx aspect, has no real way of achieving resolution. Both progressed Mars and Jupiter in Trayvon’s chart are trine Progressed Chiron in the US chart, motivating the desire (Mars) to raise up painful old wounds (Chiron) so that they can be healed and some meaning (Jupiter) found from the situation.  And Trayvon’s progressed Neptune, illusion and mystery, conjoins the US progressed South Node (karmic matters), with his progressed Uranus (shocking events) sitting right on the US Pluto (revelation of secrets and the principle of destruction).

Mars and Chiron in the progressed chart of the United States have been in a dance for a long time.  The two first opposed each other in 1985, with that dance beginning several years earlier as Ronald Reagan took office and arguably began dividing the country into conservative and liberal.  Without getting into a whole political discussion, it is widely accepted that the economic policies of those times have created the greatest wealth gap of any country in the world today.

The US progressed Mars turned retrograde in 2006-2007 which in my view was a turning point for the US and its military (Mars) dominance in the world.  Now that P Mars is approaching the second opposition to the US progressed Chiron (culminating in 2019) the fruits of these economic policies will make themselves known and a battle (Mars) may be necessary in order to heal the wounds (Chiron).

The shooting of Trayvon Martin by George Zimmerman brings some of these matters into the public eye so that they can be dissected and examined, and hopefully some resolution and healing can occur.  George Zimmerman’s progressed lunar nodes are in exact harmony with the US progressed Mars/Chiron, which suggests that he has an important role to play in this national discussion and on some level is just an echo of a larger dynamic in the healing of the greater wound.

April 13, 2012 Brad Pitt and Angelina Jolie are engaged
Browse Our Archives
get the latest from
New Visions
Sign up for our newsletter
POPULAR AT PATHEOS New Visions
1