Venus retrograde – the significance of 40 days and 40 nights 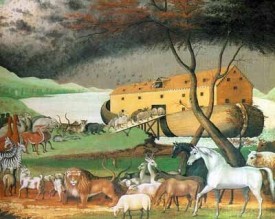 Venus turns retrograde only every two years or so which makes it one of the more rare astrological events (the outer planets retrograde every year and Mercury retrogrades four times a year).  When a planet is retrograde, meaning it APPEARS to be moving backwards from our perspective on earth, its influence tends to be more hidden and we generally are urged to look backwards and rectify matters from the past.

Forty is mentioned in the bible often, but most famously when Jesus was tempted by Satan in the wilderness for forty days. Could this be referring to the astrological phenomena of Venus retrograde? After all, Venus has two sides to her. She is the goddess of love and war according to the Babylonians. The word Lucifer (which is often confused with Satan) means light-bringer and refers to Venus in her morning star phase. The ancients said the first few days of her Lucifer phase was a particularly dangerous time. People born with Venus as a morning star are said to rush headlong into love affairs and are very passionate. Venus as an evening star is has more of the receptive, traditional meaning.

You might also be interested  in this earlier article I wrote about the two sides of Venus, and in this article about Lucifer as Venus, the Light Bringer.

Perhaps these 40-day periods of retrograde Venus can be seen in modern times as a period in which we are tested in our relationships and our values – to see if we have been able to successfully balance the warrior archetype with the goddess of love in a way that helps our relationships to be more effective while empowering us as individuals.

January 25, 2014 The Jupiter/Pluto opposition: this time with Venus
Browse Our Archives
get the latest from
New Visions
Sign up for our newsletter
POPULAR AT PATHEOS New Visions
1

3 Questions to Ask Before Death Comes Calling
Sometimes it takes a death to get us thinking about life. I...
view all New Visions blogs
Copyright 2008-2020, Patheos. All rights reserved.