Was the Old Testament God Really Powerless Against “Iron Chariots”?

Judges 1:19 has become a popular Biblical verse for critics of Christianity. A phrase/idea in the verse inspired the name of the Iron Chariots Wiki, an online resource for counter-apologetics; and it continues to be popular, most recently invoked in a comment on a post of mine.

The larger context of the verse isn’t very relevant, so I’ll actually just start by quoting an array of various translations of the verse; and then, after this, I’ll explain how it’s been used as a basis for criticism (if this can’t just be inferred).

The King James Version—the translation quoted on the front page of the Iron Chariots Wiki, and upon which the criticism was originally formulated—reads

NRSV—which is sort of the academic “gold standard,” often used by scholars and in college courses—reads

The Lord was with Judah, and he took possession of the hill country, but could not drive out the inhabitants of the plain, because they had chariots of iron.

Next up, we have NAB:

Since the LORD was with Judah, he gained possession of the mountain region. Yet he could not dislodge those who lived on the plain, because they had iron chariots.

However, this has been changed in the Revised Edition of NAB, to

The Lord was with Judah, so they gained possession of the mountain region. But they could not dispossess those who lived on the plain, because they had iron chariots.

I’ve emboldened the pronouns here to call attention to the fact that the earlier edition of NAB had singular “he” here, whereas the recent Revised Edition has plural “they.” (And in fact we see the same change between the first edition of the JPS—Jewish Publication Society—Bible and the NJPS.¹ Further, plural “they” is adopted by NASB, NET, NIV.)

In case it isn’t clear, the idea here is that, with translations that have singular “he,” this could be taken to refer to God himself; and consequently, this would suggest that the classically omnipotent God was somehow powerless even against iron chariots.

To better illustrate this—substituting the pronoun for the proper name itself—on this interpretation Judges 1:19 would read something like “the LORD was with Judah . . . yet [the LORD] could not drive out those who lived on the plain, because they had iron chariots.”

To be sure, when we look at the Hebrew text of the verse, we find that the verb here can suggest a singular “he could not drive out…”:

But that the referent of “he” here is God and not Judah is by no means clear. In fact, when we look at similar syntactical constructions elsewhere in the Hebrew Bible, it becomes abundantly clear that whenever we have the construction “The LORD/God was with <name>” (ויהי יהוה/אלהים את  or והיה יהוה/אלהים עם), followed by a conjunction and then a pronoun + an action, this second element of the sentence always refers back to the named person and not God himself.

We see this in reference to Ishmael in Genesis 21:20: “ויהי אלהים את־הנער [God was with the boy], and he grew; and he lived in the wilderness and became an archer,” where the latter clearly refers to Ishmael. It’s also seen in Genesis 39:2, in reference to Joseph: “ויהי יהוה את־יוסף [The LORD was with Joseph], so he became a successful man. And he was in the house of his master, the Egyptian.” (And again in Gen 39:21. See also 1 Samuel 3:19; 2 Kings 18:7, etc.)

Here, then, we have what’s in effect a quasi-empirical model to illustrate that the referent of the pronoun in our original verse here, Judges 1:19, is to the tribe of Judah²; thus, even if it is “he,” this is to be understood as the “collective singular,” clearly denoting Judah, not God.

In the end, the actual entry for “iron chariots” on Iron Chariots indeed acknowledges this alternate interpretation, though suggesting that this “still implies that the tribe could not overcome the chariots even with God’s help.”

But, whatever validity there may be to that, both on the Iron Chariots site and on the actual Wikipedia page for “iron chariots,” the alternate interpretation is ascribed to apologists and “believers,” respectively (“Believers however have attempted in various ways to reconcile the apparent discrepancy”).

Yet, surely, one need not be an actual apologist or believer to let one’s interpretation be guided by the “empirical” linguistic data here, to the best that we can determine this. While there’s much room elsewhere to criticize the portrayal/character of the Old Testament god, the iron chariots criticism is an uncritical canard that atheists should drop.

[2] “Quasi-empirical” is the sense that, since every other occurrence of this construction seems to clearly suggest that the referent is not to God, then this one should be understood similarly. That said, though, there’s an ambiguity in the referent of Joshua 6:27, which has this construction. Here, there’s no real good corroborating evidence to say one way or the other. 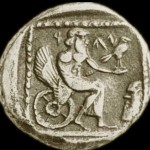 November 13, 2015
In Defense of the Christian God as "Magic Sky Fairy"
Next Post

November 17, 2015 The World Table: a New Comment System on Patheos, to Remedy Old Problems
Recent Comments
0 | Leave a Comment
Browse Our Archives
get the latest from
Nonreligious
Sign up for our newsletter
POPULAR AT PATHEOS Nonreligious
1