What Does It Mean to Take the Bible as “Metaphor”?

What Does It Mean to Take the Bible as “Metaphor”? April 30, 2016 Stewart James Felker 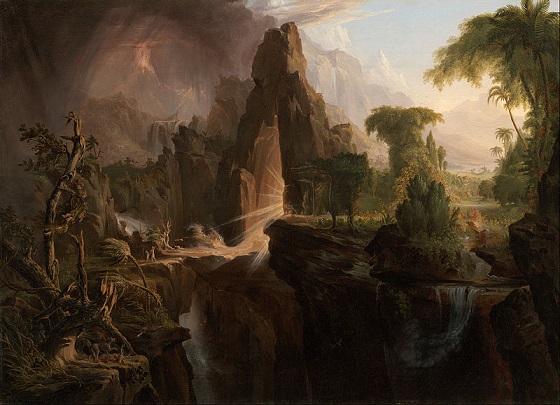 There are two pieces of confusion that I want to address here, about what it means to interpret the Bible “metaphorically.” Both involve the creation narratives of Genesis 1-3. My ultimate aim here may be quite modest—in some places, simply a call for more precise terminology—but I still think it’s important. (It also builds on a previous post of mine. Further, for many of the same arguments—but applied to the New Testament, not the Old Testament—see Gregory Dawes’s article “Why Historicity Still Matters Raymond Brown and the Infancy Narratives.”)

In my prior post, I already suggested at least one way in which people err in their (usually well-intentioned) desire to avoid an overly “literal” interpretation of Biblical texts by reinterpreting, say, individual elements within a story as figurative. The example I put forth was that of the “days” of creation in the first chapter of the book of Genesis. A not uncommon argument by accommodationists here—those who seek to harmonize Biblical interpretation with, say, scientific and historical findings—runs as follows:

I’ve elaborated on the problems with this at perhaps greatest length here; but in short, this ultimately rests on a type of ad hoc inference that runs afoul of the actual evidence in its attempt to try to conform to a predetermined interpretation—in much the same way as other similar and egregious leap in logic. (One thinks here of the faulty syllogism ascribed, perhaps apocryphally, to Jacques Lacan: “My fiancée is never late for an appointment, because if she’s late, she is no longer my fiancée.”)

But still, I want to explore exactly why people are compelled toward interpretations like this a bit more.

We could start by noting, again, that this argument about the “days” is often used in critical response to those who are suggesting a more literal interpretation of the creation account: in this instance meaning those who suggest that “six days,” in its common/plain meaning, conveys an actual historical/scientific reality in which the creation of the universe and various things within it truly took place over these 24-hour periods, as opposed to the standard billions of years of cosmological and evolutionary time frames.

In this critical response, we often hear something like “but not everyone takes the account as literal,” or “but plenty of interpreters throughout history have understood this as metaphor.”

As I’ve suggested, much of the impulse behind statements like these is well-intentioned. And certainly these statements are accurate, in important senses. But in others, I think there are some serious mistakes made. For example, people err here when they speak of the texts as a whole as non-literal—again a noble and often correct impulse—but then revert back (whether intentionally or unintentionally) to speaking of individual elements within the texts as “metaphorical.”

In fact I wonder if the use of the term “metaphor” itself contributes to this in some ways. A metaphor is, naturally, the use of one thing to represent another, often (non-literally) said to be another thing, often in the guise of a single word or phrase. Of course, a single object can be the subject of lengthy comparison, or a sequence of sub-metaphors:

My beloved is all radiant and ruddy, distinguished among ten thousand. His head is the finest gold; his locks are wavy, black as a raven. His eyes are . . . doves beside springs of water, bathed in milk, fitly set. His cheeks are . . . beds of spices, yielding fragrance. His lips are lilies, distilling liquid myrrh. His arms are rounded gold, set with jewels. His body is ivory work, encrusted with sapphires. His legs are alabaster columns, set upon bases of gold. (Song of Songs 5:10-15)

But again, there’s no indication that the Genesis creation accounts employ metaphor in these senses: there seem to be neither explicit nor implicit comparisons to anything else.

People also err when they speak of the creation accounts as allegory, when Genesis accounts displays little to none of the typical characteristics of this. (I discussed this more in my previous post, where I talked about allegory as extended metaphor, in which many or all of the elements of one story were meant to represent other things.)

Incidentally, St. Augustine wrote that Genesis is “not written in a literary style proper to allegory, as in the Song of Songs, but from beginning to end in a style proper to history, as in the Books of Kings and the other works of that type.” Of course—somewhat ironically here—Augustine himself seems to err in speaking of Song of Songs as allegory. To be sure, Song of Songs was frequently interpreted this way in antiquity, e.g. as allegory pointing toward the Christian Church. But modern interpreters—even those who accept its divine inspiration—unanimously reject the idea that this was ever the original intention.

Another argument, not infrequently seen, goes something like this:

This errs, however in two respects. For one, it assumes that two accounts—even those right next to each other in the same book—can’t genuinely contradict each other in certain aspects. Further, it again errs by attempting to resolve this “problem” by speaking of the accounts as a whole as metaphorical, when the point of fact re: contradiction here involves individual elements within these accounts.

Of course, here I only mean to specifically address the argument against contradiction by the appeal to “metaphor.” The idea is that Genesis 1 and 2 are contradictory in how they differ on the order of the creation of humans vis-à-vis that of plants and animals. (See here, as well as the discussion that my comment here was a response to, and the follow-ups, for more detail on this.) Appeal to “metaphor” accomplishes little here, and at best misleads. Although the two creation accounts obviously have different focuses, they still attempt to tell the same story in major ways—even going as far as to use the same terminology in certain instances.¹ In this sense, the contradictory details still exist on the same level of “story”; and again, there’s nothing to say that even two “non-literal” accounts can’t contradict each other on this level of story/detail.

And I suppose it’s this which brings us to the crux of the matter here. As I said in my original post, above all, narratives like the creation and “fall” of humans in Genesis 2-3 might be best characterized as mythological etiology. In this context, an etiology is

a story that tries to explain the existence of some extant phenomenon in the world by a fanciful—or even whimsical—and transparently fictional past event. This is also known as a pourquoi story: “a fictional narrative that explains why something is the way it is, for example why a snake has no legs, or why a tiger has stripes.”

To be sure, to the extent that this is indeed transparently fictional (that is, not intended as a historical and/or scientific account), this can be said to be a species of non-literal story. And this might point us toward the most cautious term for referring to narratives like Genesis 1 and 2-3: simply “story.”

To the extent that these narratives are primarily interested in saying something about the past, they don’t attempt to represent ongoing realities in any direct way.

Are the narratives of Genesis 1 and 2-3 “representative” or illustrative in any sense? To be sure, we can say that these are illustrative of God’s sovereignty in creation and history, and perhaps even intend to say something about the original rebellious or sinful state of humanity. (Though we should exercise caution with the latter here.) If you believe that these narratives are genuinely the product of divine inspiration, they say something accurate about supernatural reality—or at least how the supernatural supervenes on our mundane world.

But there seems to be little beyond this here.  To the extent that these narratives are primarily interested in saying something about the past, but did so with little genuine knowledge of this, we shouldn’t say—as is said in Pope Pius XII’s famous encyclical Humani generis—that these use “simple and metaphorical language adapted to the mentality of a people but little cultured” (§38). Ignoring the condescending language of “little cultured,” every indication suggests that these narratives aren’t adapted to cultural conventions in this way, but wholly the product of these.

In this sense, the creation accounts aren’t metaphorical or even representative of some “truer” state of affairs that the author or authors was aware of. Even if Genesis 1 and 2-3—or certain elements of these—were composed as consciously fictional/mythological, for all we know the authors couldn’t have done much better anyways. Perhaps we shouldn’t even say, for example, that these were representative of God’s sovereignty in creation and history, but rather simply that they seek to portray a single unique act (or acts) of this sovereignty.

There’s absolutely good reason for refraining from saying that Genesis 1 and 2-3 were intended as, say, historical—which places us afield of what’s said in Humani generis, where these accounts “do nevertheless pertain to history in a true sense,” delineated in certain specific ways in orthodoxy. But the opposite of history in this context is not “metaphor”; and in the end, I wonder if striving for greater precision in how we refer to these narratives might not radically reshape how we think of them in general.

May 12, 2016 What Do We Mean When We Say Religion and Science Are (or Aren't) in Conflict?
Recent Comments
0 | Leave a Comment
"OT I really wish the bible would have1. Written in Latin rather than Greek. The ..."
James Parson (DHMO powered) Gay Rights / LGBT Affirmation Doesn’t ..."
""Ancient texts deserve the same respect and benefit of the doubt and willingness to trust ..."
sushisnake The Resurrection of Jesus and His ..."
"I've only just started reading this article, but so far it seems Shawn Bolz has ..."
sushisnake Shawn Bolz: Exposing a Fraudulent Charismatic ..."
"Regardless of your thesis about Scripture, most traditional Christians and the Catholic Church today maintain ..."
Dennis Bonnette Neglected Factors in the Historical Adam ..."
Browse Our Archives
get the latest from
Nonreligious
Sign up for our newsletter
POPULAR AT PATHEOS Nonreligious
1

Why QAnon is Attacking Evangelical Leaders...
Roll to Disbelieve
Related posts from Atheology