Rudy Giuliani and “No Terror in the U.S. before Obama”—Death to Clickbait

Rudy Giuliani and “No Terror in the U.S. before Obama”—Death to Clickbait August 15, 2016 Stewart James Felker

An article from TPM (Talking Points Memo) currently graces the front page of Reddit: “Giuliani Claims There Were No Terror Attacks On US Soil Before Obama.”

I’ve just seen this headline—along with untold thousands of others now—and, naturally, was outraged by Giuliani’s astounding amnesia, among other things.

I went to the comment section of the Reddit link—skipping the article itself—to see if Giuliani’s comments might be mitigated in any way, by some sort of larger context or something.

The top comments, however, merely point to the egregious amnesia on display, due of course to the fact that Giuliani was in many ways perhaps the main American figurehead of the response to 9/11, being the mayor of New York City at the time.

This sort of response doesn’t just reside in the comment sections on sites like Reddit, though. For example, searching for current trending articles on Google News containing the keywords “Giuliani” + “9/11,” we can see that the headline of a New York Daily News article on this reads “Giuliani forgets about 9/11, claims no terror attacks before Obama.”

Similarly, the headline of an article in the International Business Times reads “Rudy Giuliani Offends 9/11 Survivor, Seems To Forget Sept 11 Terror Attack In Ohio Trump Speech.” From the looks of it, more articles than not seem to run with the same sort of headlines as these; as do two articles on our very own Atheist channel here on Patheos.

Which brings us to what Giuliani actually said.

First and foremost, obviously we should post a video of Giuliani’s full remarks.

And once we actually watch this brief video, we can immediately see that what he said sits in pretty sharp contrast to what the headlines imply.

For one, contrary to the idea that he had some sort of bizarre amnesia about 9/11 here, from the very beginning of this clip you can see that he explicitly framed his comments precisely in the context of both 9/11 as well as the 1993 WTC bombing.

More specifically, what he actually said was that in the wake of the signing of the PATRIOT Act, “under those 8 years [after the PATRIOT Act]—before Obama came along—we didn’t have any successful radical Islamic terrorist attack inside the United States.”

Despite this, however, Giuliani is of course mistaken on two fronts here:

Despite all this, again, even within the text of the original article that I mentioned itself—despite the fact that it elsewhere quotes Giuliani in full!—the first summarizing line is that Giuliani “declared that Islamic extremists hadn’t carried out any terror attacks on American soil before Barack Obama’s presidency.”

The headline of a Washington Post article—which, admittedly, I haven’t read yet—reads “Rudy Giuliani didn’t forget about 9/11 today. He conveniently omitted it.” Based on the headline, I can’t for the life of me imagine the point that the article itself makes.

Now, thankfully, at least an article in Slate seems to have issued the corrective, along the lines of the actual context of Giluani’s remarks that I related above.

To be sure, I have no doubt that whatever connection Giuliani was trying to draw between Obama’s policy relative to the PATRIOT Act and the number of terror attacks in the U.S. is a baseless and facile one.

But we shouldn’t have to make shit up about his actual quote in order to say this. This can easily be refuted without intentionally deceptive clickbait; and those who did so should feel ashamed.

What does this have to do with religion? Well, from one perspective, it has jack-shit to do with it; though again, this certainly didn’t stop two people from this very channel on Patheos, and many others, from reporting on it, and with the misleading headline.

But on the other hand, inaccurate clickbait-y headlines plague news about religion just as much as anything else—and perhaps we could even draw some broader connection relating to careful readings of holy texts, etc.—so maybe that this can yet be an instructive post on the subject. 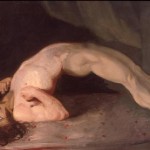 August 14, 2016
The Reality (and Unreality) of Demon Possession
Next Post 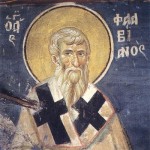 August 17, 2016 Paul and the "Lesser" Divinity of the Preexistent Christ?
Recent Comments
0 | Leave a Comment
"OT I really wish the bible would have1. Written in Latin rather than Greek. The ..."
James Parson (DHMO powered) Gay Rights / LGBT Affirmation Doesn’t ..."
""Ancient texts deserve the same respect and benefit of the doubt and willingness to trust ..."
sushisnake The Resurrection of Jesus and His ..."
"I've only just started reading this article, but so far it seems Shawn Bolz has ..."
sushisnake Shawn Bolz: Exposing a Fraudulent Charismatic ..."
"Regardless of your thesis about Scripture, most traditional Christians and the Catholic Church today maintain ..."
Dennis Bonnette Neglected Factors in the Historical Adam ..."
Browse Our Archives
get the latest from
Nonreligious
Sign up for our newsletter
POPULAR AT PATHEOS Nonreligious
1