An Important New Book on the Background of the Biblical Gospels

An Important New Book on the Background of the Biblical Gospels September 19, 2016 Stewart James Felker

An important new volume of essays, Enoch and the Synoptic Gospels: Reminiscences, Allusions, Intertextuality, is being released this week. (Table of contents and relevant links can be found at the end of this post.) This is the first volume to collect some of the papers given at the 2013 Enoch Seminar conference, and is to be followed next year by the volume The Early Enoch Tradition and the Synoptic Gospels.

The focus of these volumes is, as the titles suggest, the influence of the book of Enoch (a.k.a. 1 Enoch) on the gospels of the New Testament—particularly the first three, the Synoptic gospels.

Now the book of Enoch, written and compiled roughly between the 3rd century BCE and the 1st century, is considered apocryphal—that is, not part of the official Jewish or Christian canons—eventually having fallen out of favor among early orthodox Jews and Christians for various reasons.

But we know for certain that 1 Enoch was well-known, for example, among the various groups represented in the Dead Sea Scrolls; and more importantly that it also influenced the individuals and authors of the New Testament.

It’s explicitly quoted in the New Testament epistle of Jude (1:14-15); and there’s also a non-explicit quotation, or quasi-quotation, in Matthew 22:13 (on this, see my recent comment here, which heavily draws on Joseph Verheyden’s essay “Evidence of 1 Enoch 10:4 in Matthew 22:13?”). Further, there are various other clear references in the NT to traditions known primarily or exclusively from the Enochic literature—as my friend Paul Davidson has written about over at Is That in the Bible?

And this is no surprise, as the book of Enoch and the traditions we find reflected in it carved out a decisive place in the world of Second Temple Judaism—a term that refers to the diverse brands of Jewish thought and belief in the centuries prior to the Common Era, leading up to the birth of Christianity in the early 1st century CE (and finally extending to the destruction of the Second Temple in the year 70).

As the editors of Enoch and the Synoptic Gospels write in their introductory essay,

We know in principle that traditions in 1 Enoch shaped the thought world of a number of Second Temple writings in relation to matters such as the provenance and effects of evil, the structure of the cosmos, poverty and wealth, the bifurcation of humanity along the lines of “the righteous” and “the wicked,” the partition of time and eschatology, postmortem existence, the notion of “revealed” knowledge, and early “biblical” interpretation. We also know that most of 1 Enoch was composed before the turn of the Common Era. (Loren Stuckenbruck and Gabriele Boccaccini, “1 Enoch and the Synoptic Gospels,” 5)

In light of this, it’s hard to overestimate the importance of 1 Enoch for understanding early Christianity and the New Testament, as many if not all of these themes are found within the latter, too. (In the volume, Gabriele Boccaccini supplies an incisive comment relevant to the possible overestimation of its importance—a clarification or caveat that nonetheless at the same time manages to acknowledge this profound influence, too: “The Jesus movement was not an Enochic movement but an outgrowth of the Enochic movement” [“Forgiveness of Sins: An Enochic Problem, a Synoptic Answer,” 167].)

More specifically, a few elements of the Synoptic gospels in particular that are elucidated by an Enochic background include

As with most academic books, these volumes being released are, well, borderline prohibitively expensive. Nevertheless, even just being familiar with the kinds of things that the essays within them cover can be enormously helpful.

To that end, a short description of all of the essays in the current volume being released this week can be found in the introductory essay, starting here. Further, in the list that follows—the table of contents of the first volume being released—I’ve supplied links to these papers (or related ones), if they’re available online:

September 18, 2016
The History of Early Biblical Interpretation — as a Weapon (and a Shield)
Next Post 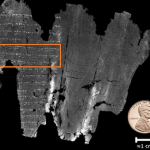 September 21, 2016 The Incredible Technological Feat Behind Reading a New Biblical Scroll
Recent Comments
0 | Leave a Comment
"OT I really wish the bible would have1. Written in Latin rather than Greek. The ..."
James Parson (DHMO powered) Gay Rights / LGBT Affirmation Doesn’t ..."
""Ancient texts deserve the same respect and benefit of the doubt and willingness to trust ..."
sushisnake The Resurrection of Jesus and His ..."
"I've only just started reading this article, but so far it seems Shawn Bolz has ..."
sushisnake Shawn Bolz: Exposing a Fraudulent Charismatic ..."
"Regardless of your thesis about Scripture, most traditional Christians and the Catholic Church today maintain ..."
Dennis Bonnette Neglected Factors in the Historical Adam ..."
Browse Our Archives
get the latest from
Nonreligious
Sign up for our newsletter
POPULAR AT PATHEOS Nonreligious
1