Has Noah Lost His Flood? The Ever-diminishing Biblical Deluge

I started writing this just as a summary and analysis of an interesting (and potentially greatly important) new article on the Biblical flood published in the journal Zeitschrift für die alttestamentliche Wissenschaft: Idan Dershowitz’ “Man of the Land: Unearthing the Original Noah.”

However, at one point I kinda realized that Dershowitz’ article is part of a bigger history and narrative here—one worth telling more fully. So I’m going to split this up into at least two parts, with this first part just exploring some of the background of how the Biblical flood narrative has been critically analyzed (in both its literary and purported historical aspects), leading up to the 20th century. I’m saving the bulk of discussion of Dershowitz’ article itself for the next installment.

The flood of Noah was once held up as one of the clearest examples of the Judeo-Christian God’s intervention in our world. Not only that, but the event has long held an importance in Judaism and Christianity not just for what it says about the past, in terms of human sinfulness and God’s response to this, but as a premonition of the grand judgment at the end of history. Nowhere is this clearer than in Jesus’ final discourse on the Mount of Olives, as found in several of the New Testament gospels: “as the days of Noah were, so shall also the coming of the Son of Man be” (Matthew 24:37).

But in recent centuries, the flood has lost much of its former luster.

A brief history of the major upheavals in attitudes toward the flood might begin around the 16th century, not long after the early European colonization of the Americas, as the world in effect became vastly larger than previously imagined. As James Moore characterizes it, at first the problems of the flood “did not so much concern its historicity as they did its universality”:

One problem arose from the absence in America of some Old World animals and by the presence of new varieties (viz., how did they find their way from Mount Ararat [where Noah’s ark landed according to Genesis 8:4]?). Together with the obstacle of insufficient water for a universal Deluge, these complications eventually compelled some scholars to put forth a “local flood” theory. (“Charles Lyell and the Noachian Deluge” in Dundes, The Flood Myth, 406)

Into the 18th and 19th century, it was the geological insights of those like James Hutton and Charles Lyell, and the rise of geological uniformitarianism, that threatened the catastrophism upon which the Biblical flood and so-called “flood geology” depended. But supporters of a universal historical flood fought back, able to capitalize on certain elements and uncertainties that were left unexplained by these new geological theories; and “[b]y the turn of the nineteenth century a new enthusiasm for the Flood theory of geology had swept Europe” (Moore, 407).

Despite this early enthusiasm, however, the 19th century itself would present flood proponents with their most difficult challenges yet.

In certain ways, we might characterize what happened during this century as a kind of microcosmic repetition of the attitudes and debates that had taken place before then—though ones that ultimately ended up normalizing skepticism in a way they never had before. John Baldwin, summarizing the four phases of response on the part of geologists and theologians (or perhaps more accurately, “geologist-theologians”) in this century, as delineated by Rodney Stiling in his comprehensive “The Diminishing Deluge: Noah’s Flood in Nineteenth-century American Thought,” writes

First they considered the flood as a deep-water universal event responsible for shaping the many-layered geologic column itself. Next they reduced the flood to one that disturbed only the uppermost surface of the globe. In the third phase they regarded the Genesis flood as only a local event. (John Baldwin [ed.], Creation, Catastrophe & Calvary, 10)

Finally, in the last phase, “they concluded that there had been no real flood in history at all”; but this is getting slightly ahead of things.

At the same time that the scientific debates were raging, the groundwork for another debate over the historicity of flood was being laid, this one to take place within an entirely different discipline: the literary one.

Excavations of ancient Mesopotamia in the middle of the 19th century had uncovered various tablets written in cuneiform, including what would eventually be recognized as fragments of the Epic of Gilgamesh. The ensuing years were occupied by attempts to decipher the Akkadian language of these; but it was George Smith in early 1870s who would finally produce a seminal translation of sections of the Epic—actually known as Izdubar at that point, not Gilgamesh, due to an error in translation—and, most important of all, would bring the 11th tablet and its flood hero Utnapishtim to public attention.

Smith’s 1872 presentation to the Society of Biblical Archaeology (and its subsequent publication in its transactions) marks one of the seminal moments in academic Biblical studies, with Smith quoting a long extract from Gilgamesh which furnished clear parallels with the story of the Biblical flood. Although there were close parallels to several elements of the Biblical flood story here, perhaps the most significant among the lines that Smith quoted were these:

These lines unambiguously parallel the 8th and 9th chapters of Genesis, in which Noah also releases a bird three times; and after the last doesn’t return, he and his family exit the ark along with the animals, and then Noah offers sacrifice on Ararat.

In many ways, the reaction to all this mirrored that on the scientific side of things—an initial hope that this all served as a confirmation of the events of Biblical history, tempered by the looming prospect of skepticism. For example, an editorial in the December 22, 1872 edition of The New York Times described the reaction to Smith’s work in these terms:

For the present the orthodox people are in great delight, and are very much prepossessed by the corroboration which it affords to Biblical history. It is possible, however, as has been pointed out, that the Chaldean inscription, if genuine, may be regarded as a confirmation of the statement that there are various traditions of the deluge apart from the Biblical one, which is perhaps legendary like the rest. (Quoted from Vybarr Cregan-Reid, “The Gilgamesh Controversy: The Ancient Epic and Late-Victorian Geology,” 228; emphasis mine)

I don’t want to leave anyone hanging here; but at the same time I don’t want to overwhelm everyone with a huge essay, as I’m often guilty of doing. (Case in point being one of my other recent posts which looked specifically at some neglected theological dimensions of the historicity of the Biblical flood narrative and debates here, in pretty exhaustive detail.)

As a final note, though: if many progressive believers these days are perfectly comfortable admitting that the Biblical flood narrative presents us with “legendary” material that only has a tenuous connection with history, Idan Dershowitz’ article “Man of the Land: Unearthing the Original Noah”—which, again, I’ll cover in detail in my next post—threatens to dissociate Noah from his flood even further; in some ways leaving the traditional Noah merely a shell of his former literary self, with the flood story somewhat artificially grafted onto his original Biblical legend, in which he was quite a different hero.²

[1] In the numbering system used today, this is Gilgamesh XI 147f. In the standard modern translation of George, the first lines here are rendered “When the seventh day arrived — I brought out a dove, setting it free…”

[2] To be honest though, my main interest in Dershowitz’ article isn’t in its potential theological implications, but merely its literary ones. 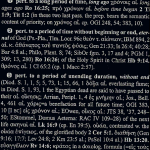 December 8, 2016 Some Problem Areas for the Compatibility of Religion and Evolution
Recent Comments
0 | Leave a Comment
"OT I really wish the bible would have1. Written in Latin rather than Greek. The ..."
James "The Paſtafarian" Parſon Gay Rights / LGBT Affirmation Doesn’t ..."
""Ancient texts deserve the same respect and benefit of the doubt and willingness to trust ..."
sushisnake The Resurrection of Jesus and His ..."
"I've only just started reading this article, but so far it seems Shawn Bolz has ..."
sushisnake Shawn Bolz: Exposing a Fraudulent Charismatic ..."
"Regardless of your thesis about Scripture, most traditional Christians and the Catholic Church today maintain ..."
Dennis Bonnette Neglected Factors in the Historical Adam ..."
Browse Our Archives
get the latest from
Nonreligious
Sign up for our newsletter
POPULAR AT PATHEOS Nonreligious
1

MLMs' Future: LuLaRoe and Its Pyramid...
Roll to Disbelieve
Related posts from Atheology