D.A. Carson’s “Subtle Ways to Abandon the Authority of Scripture” 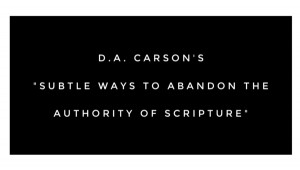 In May 2016 D.A. Carson delivered a lecture at the Basics Conference in Cleveland, OH. His title was “Subtle Ways to Abandon the Authority of Scripture.”

In this lecture, Carson does not concentrate on the arguments of skeptics, who intentionally cast doubt on the inerrancy and credibility of Scripture. Rather, he gives ten subtle ways that Christians, knowingly and unknowingly abandon the authority of Scripture.

Below I summarize his ten ways:

This is seen particularly in the health, wealth and prosperity movement where specific texts with specific themes, which are problematic to their theology, are intentionally hidden from view. In this movement, there are very few citations about suffering, denying self or even the promise of persecution. You’ll rarely hear a pastor or teacher from this theological tribe describe what the author of Hebrews describes in the eleventh chapter.

It is not, however, just a health, wealth and prosperity problem. Pastors and teachers with seemingly reformed and Christ-centered theology are tempted to approach passages of Scripture that is feared to divide the church, with a selective silence. Some examples include Gender roles, homosexual acceptance, and sovereignty over salvation.

The bible says a lot about hell. When we introduce the subject we might say something like, “I don’t really like this doctrine, but it’s what the Bible says so I have to talk about it.” Carson says, “God have mercy on your soul. Are you going to present yourself as more compassionate than God?”

We come to election and read Romans chapter 9 and we believe it, but we stop short of a full explanation because of what people might think.

3. Subtle Moves to Legitimize Things That The Bible Condemns

With so many views, it’s easy to subtlety, and sometimes unknowingly, soften our stance on issues because of the sheer number of people that oppose. As the culture shifts, the temptation is to subtly shift with it, leaving behind the truth the Bible speaks regarding the issue.

4. The Art of Imperious Ignorance

There are things that appear many times in Scripture. Things the Word of God is extremely clear on. However, those who impose imperious ignorance will hear debate as approval for ignorance. The general rule being: “If there’s debate, then no one really knows and therefore I can’t really know.”

This maneuver, however, usually goes deeper than “I don’t know.” It, more often than not, leads someone past the “I don’t know” stage and into the “I can take whatever position I want and feel good about it since no one can really prove me wrong” stage.

5. Determinately Not Getting Right The Balance of Scripture

Dr. Carson uses an example of the doctrine of sanctification. He tells a story of when he and a group of men debated about how sanctification works in the life of a Christian. After hours of presenting personal views, they asked eachother questions for clarity sake. One of the men then made up a case study and asked how the others would address it. Once the case study was laid out, they discovered they all would have handled it the same way. Carson then asked, “Why are we arguing?”

The reason why they were arguing, to begin with, wasn’t because they disagreed on theological grounds, but because some, in light of their backgrounds, were more sensitive to particular wording that others were comfortable with. Some that came out of legalistic backgrounds liked more grace language within the discussion of sanctification, while others, who came from very free, undisciplined backgrounds liked more disciplined language for sanctification.

He also points out that “Pastors are general practitioners. We don’t have the right to become specialists.”

7. The Failure to Be Bound by Both The Formal Principle and The Material Principle

Some say, “I don’t need to read theology; I just preach the Bible.”

8. The Lust For The Merely Technical

Carson tells of a time when a seminary student told him, “I used to like reading my Bible.” The student, through all his studies, had made all his Bible reading technical or academic in nature.

Carson warns that the Bible should never be read in a strictly technical sense. Since it’s always the word of God, there should always be a bifurcation between rigorous thought and devotional reading.

9. The Lust for The Contemporary Philosophical Agenda

It is possible to be so driven by the contemporary, that we begin to lose the sense of historical confessions of the church. There is a real temptation to make the bible relevant to the culture. The Bible IS relevant, we don’t need to MAKE it relevant.

We can easily abandon true and honest biblical interpretation and use the Bible only to address modern and cultural needs if we are not careful.

10. Anything That Reduces Our Trembling For The Word of God

Carson concludes, “Our lives must adorn the Word of God.” 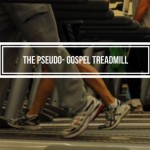 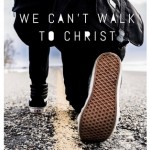 November 7, 2016 We Can't Walk To Christ!
Recent Comments
0 | Leave a Comment
Browse Our Archives
Related posts from A Winged Creature 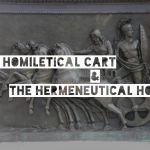 Evangelical
The Homiletical Cart & The Hermeneutical Horse
A Winged Creature 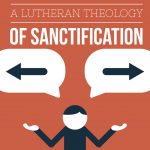 Evangelical
A Lutheran Theology of Sanctification
A Winged Creature 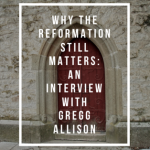 Evangelical
Why The Reformation Still Matters: An Interview with...
A Winged Creature 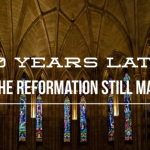