An Atheist Reads Genesis 1:2-3: Saving Our Lives With Stories

Carry your candle, run to the darkness
Seek out the lonely, the tired and worn
Hold out your candle for all to see it
Take your candle, and go light your world. — Chris Rice

So begins the second verse of the Bible.

I remember being a child, about ten years old, reading those words. The emptiness those verses spoke of – the idea of an absolute void. Peering into that darkness is frightening.

If I’m going to be dead honest, the idea of darkness still frightens me. I have days when I am embracing the zest of life, in all its beauty and pain, horror and comfort, comedy and tragedy…and then, I get this feeling of existential angst. Like I’m alone in the universe, ultimately, and one day I’m going to die, and the universe will grow cold.

Sometimes I wonder if a major reason we are reaching out for some type of intelligent life out there – besides wanting to possibly inhabit another planet or other more noble scientific pursuits – is that we want to know whether we are alone.

Something about the idea that someone out there understands our experience gives us a kind of comfort. I think that, for many Christians, God is that source of comfort, that source of understanding. For many of us atheists…well, we’ve found it in other things. In the reality of connection to the universe, in connection to friends, in connection to what we love about our lives…and, among some of us, a seeking for some kind of intelligent life beyond our experience that might make us feel a little less alone.

Now, I can debate God all day. But sometimes I’ll be debating about the concept of God, and I’ll be digging into the reasoning of a Christian, and suddenly I’ll hit the real reason-underneath-the-reason of why they cling to a concept of God. More often than not, that reason is fear – fear that if they let go of God, they’ll be let out into a cold void in which nothing matters. In which they are alone.

We know this from stats, too. The stronger your safety net, the less likely you are to be religious. Not necessarily because your logic is better…but because you feel less alone, less isolated, less existentially segregated from existence.

There’s this concept that I’ve heard in Christianity that it is up to human beings to be manifestations of God to each other. Preachers who wax eloquent on this concept will say that it is a waste of time to simply hope that God helps your fellowman – maybe God needs someone with skin on to do his work.

Now, the concept has several things we could be critical of, like the disturbing beliefs and irrational rules Christian “help” is often based on. But human beings, I think, created this concept for a reason. Many of us, include myself, have a yearning to feel less alone, to feel connected, to feel that we’re more than just meaningless nothings in a universe that does not care about us.

But here’s one thing I think about, as an ex-Christian atheist – in this whole scheme, isn’t God lonely?

Is that why he supposedly created a world? Because he wanted someone to love, someone to care for, someone to make his spirit less lonely and trapped in the void?

Come to think of it, isn’t that why we create our own worlds?

Maybe that’s the same thing I do, in a different way, with different concepts.

To some extent, I think we’re all trying to save our lives with stories we tell ourselves about who we are.

My story is not the Genesis story. But like the writer(s) of Genesis 1, I’m putting pen to paper and making a story that is largely determined by my own desires, insecurities, and fears even as it responds to them in various ways.

But I don’t want to create my story alone. At the base of my story is a strong desire to connect in a positive way to other conscious beings we are actually wearing skin. Just as many Christians will insist on the importance of in-person help and interaction as a manifestation of God, so it is not enough for me to merely claim I know who Martin Hughes is – I actually have to be that, in person, with my skin on.

And if I want to make it a less lonely world in which people feel less of a need to have God as a character in their stories…it would help to recognize them as valuable, as worthy of love, as human. Because I am in charge of my perspective, and if I choose to see them that way, that’s what they are. And if that view I have of them resonates in their own story, they may see less of a reason to believe in God.

Or maybe they won’t. Maybe they’ll still need God, but we can still bond over our common humanity, vulnerabilities and all, and thus see collaborative ways to make the world a better place in spite of our disagreements. And in its way, either alternative has a certain beauty to it. 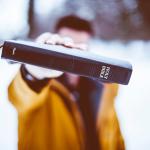 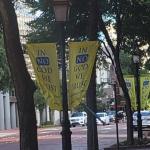 July 2, 2019 "In No God We Trust": Atheist Banners Teach Texas A Lesson
Recent Comments
0 | Leave a Comment
Browse Our Archives
Follow Us!