An Atheist Reads the Bible: Genesis 1:1 (The Beginning)

“In the beginning, God created the heavens and the earth.”

They’re the first words in the Bible and, for many of us atheists, they are highly offensive. Why do we have to put God there, right at the beginning? It’s really messed up in a disturbing way – as if, before our own experience, before logic, before reality itself…the Bible is saying that we have to start with God.

As an atheist who is a former antitheist, I sympathize. Because of this verse, many Christians believe that a nonexistent God trumps humanity’s own judgment, and this can have extremely disturbing consequences.

At the same time, I am fascinated by the concept of a beginning. The reality that people, for thousands of years, have attached significance to the beginning is very interesting to me. For some reason, people have been obsessed with origins as if they have some significance for who we are here and now.

I see this in my own approach to atheism, as well. When Neil Degrasse Tyson waxes eloquent about the reality that we all came from stars, I feel a swelling in my heart. I feel more connected to everything around me – not just in a physical sense, but down to the depths of my emotions and thoughts. It’s beautiful.

To me, what I feel seems almost analogous to what a Christian feels when rejoicing that God loves them. Oh, sure, I know that the universe as a whole does not care about me, and that my consciousness will eventually disintegrate instead of living with a conscious being in paradise. But there is something about being intimately connected with the physicality of the universe and originating from the same place as the stars in the night sky that gives me a deep sense of assurance.

I think that when I was a Christian, I thought that atheists had to leave the wonder of God creating the entire universe. But I can see, now, that this is far from the truth. I don’t believe God created the entire universe, but I do share something in common with most Christians in my visceral attraction towards the idea of having some sort of origin. What Christians call “spirituality” feels a lot like the way I feel when I look up in the night sky and think that I came from what the rest of the universe came from. My heart swells even now I think about the billions of years it took to have my heartbeat, to use my fingers to type, and to have an incredibly intricate brain that enables me to even write these words to other manifestations of the evolution in this awesome universe.

Sometimes, I think that Christians suspect that atheists are interested in taking away their sense of connection to an origin that they label “spirituality.” But these feelings I have indicate to me that, at lease for me, nothing could be farther from the truth. I am not trying to take away the inspiring sense of wonder and awe that a Christian might feel when they close their eyes, or look up into the night sky. If anything, my interest is in expanding it.

Here’s a confession: I have had extensive conversations with Christians who will say that God hides behind a veil – that he probably created the universe, but that we can only theorize about how he did that and what he might be like – and sometimes, when I start to argue with the most liberal of these Christians…I find that there isn’t much to argue about. I, too, think that there is a lot I don’t know about where I come from, about how the universe works, or about the origins of the universe (or, indeed, whether discussing the “origins” of the universe even makes sense). And that sense of mystery gives me a sense of wonder. I still want to know, I still want to explore, and I’m still fascinated by this life. The fact that I don’t know what’s behind the limits of my knowledge exponentially increases my interest in living while I’m here…and even though I am fairly confident that there’s no God, I still feel a strange affinity with the Christian who embraces the “mystery” of God as I am invigorated by the mysteries before me.

I think at the base of it, we live in a beautiful world if you look at it from a certain angle. Oh, there is ugliness in religion a-plenty. I’m not denying that at all. But when I ask myself what the origins of religion must be – the human desires it sprang from, and why I might have been attracted to it at one point of my life – I begin to see how humans could be so attached to several religious concepts. It makes sense to me because I still have a kind of interest in origins, in connection to the heart of existence, in the mystery of how the universe began. I still embrace wonder and often feel a sense of awe. The fact that I became an atheist didn’t change all that, for me…I simply found it in different places.

Admittedly, embracing these emotions, thoughts, and feelings as an atheist is a bit more freeing than it was when I was a Christian. My wonder does not have to stop with, “God did it, that’s it.” I can dig deeper, I can play with different theories and ways of looking at the world, and I can embrace a wider range of thoughts – both religious and secular – as an atheist than I ever could as a fundamentalist Christian. I feel free to embrace truth and entertain myths with a greater sense of abandon.

So when I read those first words in the Bible, I’m glad I’m not limited to a rather restrictive God. But I still feel a sense of attraction to the wonder, connection, and beauty within the beginning of our existence, and I see it as a place that me and most Christians can connect and understand each other, in spite of the divide. In my life, I’ve found that this mutual understanding can make a healing difference in individual relationships, allowing for more honesty in friendships concerning where we’re coming from. 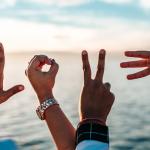 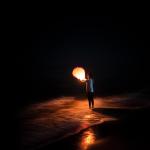 June 5, 2019 An Atheist Reads Genesis 1:2-3: Saving Our Lives With Stories
Recent Comments
0 | Leave a Comment
"This is nice content. Actually in this world, education is very important for us and ..."
Ajay Kamboj Why do Christians who rarely read ..."
"The essence of the story is that before the eating of the apple, Adam and ..."
Rich Faussette Eve Is My Hero: An Atheist’s ..."
"God's Holy Spirit helps us understand His Word. His written word is the story of ..."
m cormier Four Things CS Lewis Said About ..."
"Once you read the Bible multiple times, you can see it inerrant. Who cares what ..."
Dr. Jerry Fowler Four Things CS Lewis Said About ..."
Browse Our Archives
get the latest from
Nonreligious
Sign up for our newsletter
POPULAR AT PATHEOS Nonreligious
1