The Curious Anachronism of “His Dark Materials”

The Curious Anachronism of “His Dark Materials” November 5, 2019 John Ehrett

Earlier this week, HBO dropped the first episode of His Dark Materials, the latest big-budget fantasy epic designed to compensate for Game of Thrones’ absence. And as a longtime reader of the book trilogy it’s based on, I was more than happy to tune in.

The show kicks off in an alternative, steampunk-inflected version of Oxford, where human souls take the form of animals known as daemons (from the Greek daimon, referring to a “guiding spirit”). All research and inquiry occurs under the auspices of the ominous Magisterium, a religious bureaucracy clearly styled after the Catholic Church. When her friends start mysteriously vanishing, young Lyra Belacqua must set off on a journey northward in search of her uncle Asriel, who’s been conducting experiments on the aurora borealis in an attempt to uncover strange metaphysical truths.

Full disclosure: I’m a fan of author Philip Pullman’s fantasy world. His cosmos is a sprawling canvas of giant airships, exotic weapons, armored polar bears, sky witches, interdimensional soul-sucking vampires, and much more. The plot clips along at a swift pace and certainly never becomes predictable (even if, in my humble opinion, the books trend downward in quality after the first). So I’ll freely admit that I had a great time reading them. That said…

In case you missed it the first time around (the first volume of the trilogy, The Golden Compass, was made into an unsuccessful Hollywood film in 2007), Pullman’s saga has long been quite controversial. Pullman is an agnostic and critic of religion whose series has often been characterized as the “anti-Narnia”—and to be sure, it’s definitely a humanistic fable about the oppressiveness of religious belief and the joys of liberal scientism. (I will never, for the life of me, understand why the Harry Potter books provoked a sharper backlash.) Indeed, the trilogy ends on a note that would make Steven Pinker or Jerry Coyne proud. With “God”—a decrepit angel known as “the Authority”— out of the way, Lyra dreamily proclaims that the time has now come to build the “Republic of Heaven.”

Now, His Dark Materials is very, very far from a sophisticated critique of religious belief. (Putting it charitably, there’s much more Dawkins here than Hume.) And purely as a literary matter, there’s nothing here that can rival the awesome emotional power of Lewis’s Narnia books at their best. But I think it’s generally fair to say that despite its playful exterior, Pullman’s trilogy is—at its heart—something rather different than the type of “fairy-story” the Inklings had in mind. Where traditional fantasy literature is often more explicit about its theological (or at least transcendental) underpinnings, Pullman’s trilogy is dogmatically resistant to any glimmer of overarching purpose, grand teleology of history, or universal moral order. In short, His Dark Materials is modernist all the way down, inviting its readers to contemplate what a nice world we could have if only people would just be reasonable and empirical and let go of their silly superstitions and hang-ups.

But what’s interesting about watching His Dark Materials in 2019 is just how dated the whole thing feels, at least thematically. The kind of universal secular reason celebrated by Pullman—whether defended from the left by Pinker’s Enlightenment Now, or from the right by Jonah Goldberg’s Suicide of the West—is, quite simply, no longer in vogue. Today’s discourse is driven by analyses of power, its origins and its functions. And when viewed through those lenses, His Dark Materials is a pretty easy target for critique: one can easily frame Pullman’s Oxford as an odious icon of classism, denounce his villainous northern “Tartars” as caricatures born of xenophobia, or question his reduction of characters of color to supporting roles. Pullman’s vision of the Republic of Heaven, or the right side of history—a vision many readers likely would have shared when his books first hit stores— looks radically different from the vision currently driving the progressive movement.

At the very least, this should chasten anyone inclined to make confident pronouncements about history’s direction. But I think it also reflects something deeper—namely, the fact that despite its pretenses toward “humanism,” there’s a fundamental inhumanity latent within Pullman’s vision. The kind of narratives that real-world human beings love—and that “ring true” to us—reflect a way of thinking about morality that is alien to Pullman’s project.

Without spoiling too much, Pullman’s novels largely reflect what Alasdair MacIntyre might call capital-M Morality, the vague notion that decisions about right and wrong can be made on the basis of a series of scientifically defensible axioms (“pursue the greatest good for the greatest number” is an obvious example—and it’s the axiom that compels the separation of Lyra from her lover at the close of book three).  By contrast, when we talk about Joseph Campbell’s “hero’s journey,” the backbone of legendary narrative, we’re talking about a structure that appeals to transcendent value as exemplified and actualized through the cultivation of virtue. On this account, the hero of classical mythology becomes a hero (in an objective sense) through the events that cultivate and refine his character. As MacIntyre points out in the closing pages of Ethics in the Conflicts of Modernity, this generally aligns with the ways in which we imagine or conceive our own life stories: we understand ourselves as growing and progressing over time as distinctly moral actors, with the capacity to revisit and reconsider the moral judgments we made at earlier points in our development.

That sense of narrative, of progress in the cultivation of virtue, is broadly absent from Pullman’s trilogy. For instance, Pullman conceives of “coming of age” in predominantly sexual terms, rather than as acceptance of the formal responsibilities inherent to maturity (with sexuality as a second-order consideration). And this, in turn, leads to a certain hollowness that pervades the trilogy: Pullman’s characters don’t feel like real people in the same way that, say, Lewis’s characters do.

Whether or not we can articulate this way of thinking about narrative and character, we feel it in our bones—and we know when it’s absent. I think this helps explain why His Dark Materials feels like a throwback to another time; it reflects a way of thinking that much of society has found to be fundamentally hostile to their deepest intuitions about reality, and has since moved beyond. What the culture is moving toward, of course, is a different matter altogether. Here’s hoping the virtue ethicists carry the day. 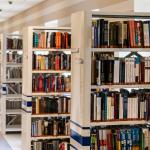 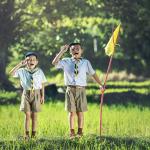 November 18, 2019 What Are the Boy Scouts For?
Recent Comments
1 Comment | Leave a Comment
Browse Our Archives
get the latest updates from
Between Two Kingdoms
and the Patheos
Evangelical
Channel
POPULAR AT PATHEOS Evangelical
1