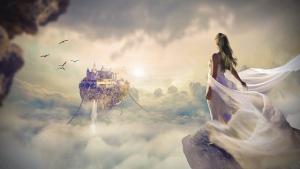 While perusing Christiana Hale’s fine new book Deeper Heaven: A Reader’s Guide to C.S. Lewis’s Ransom Trilogy, I was reminded of a delightful neologism first coined by Lewis scholar Michael Ward: “donegality.” In a nutshell, the word (which has a convoluted etymology not worth recounting here) refers to the sense of ascertainable place that a fictional work manages to create. If you’ve ever felt like Lewis’s Narnia, or J.K. Rowling’s Hogwarts School of Witchcraft and Wizardry, was so plausible you halfway expect it’s actually real, so vivid you can picture it perfectly and understand its own internal logic, you’ve experienced the donegality conjured forth by talented writers.

I find the concept of donegality particularly useful in thinking through why, exactly, I love some of the imaginative stories I do—Terry Brooks’s world of Shannara, the haunted wastelands of Stephen King’s Dark Tower series, the mystical Chicago of Jim Butcher’s Dresden Files, the interlaced digital multiverse of Tad Williams’s Otherland tetralogy, and many others. All of these works, at some level, rely on predictable narratives and deploy familiar tropes, but it’s hard to top the haunting sense of “beautiful otherworldliness” they evoke. These are fictional universes I feel like I know in an experiential sense, and that I look forward to revisiting in every new installment. (I daresay the concept can be extended beyond literature: James Cameron’s Avatar and Blizzard’s World of Warcraft seem to do a pretty good job of developing donegality.)

Over the last couple of weeks, the idea of donegality has come to mind repeatedly as I’ve contemplated Pierre Bayard’s How to Talk About Books You Haven’t Read, another volume I (perhaps ironically) finished recently. At bottom, Bayard argues that the boundary between “having read” and “not having read” a particular text is far more fluid than we ordinarily think. For one thing, how much of any particular book do we really remember years after having finished it? Do we ever approach a volume apart from the screen of our own philosophical preconceptions and literary expectations? Can there ever possibly be a “meeting of the minds” between an author who occupied a long-lost world of thought and a present-day reader? All of this, for Bayard, militates against spending much time struggling with difficult books.

But, Bayard believes, the life of the non-reader is ultimately to be commended. Allow individuals to stop being passive readers and become active writers—creators of stories not contingent upon the texts of others, but drawn entirely from the depths of their own lives. An individual’s capacity to understand and internalize Paradise Lost, as Milton wrote it, isn’t all that interesting to Bayard; far more interesting is the set of assumptions someone might have about Paradise Lost without ever having cracked the spine of the book. Despite myself, I was reminded of an old episode of the Arthur children’s show, “I’d Rather Read It Myself,” in which Arthur’s little sister D.W.—unable to actually read—pretends to read a book on Leonardo da Vinci and substitutes for the actual text a sprawling fictional story weaving in elements of her life experience. (Keyser Söze would be proud.)

On the face of things, it’s hard to find a more perfect distillation of the concept that Carl Trueman might call the “expressive self”—a glorification of personal experience that supersedes any deference to the given. But more germanely, it seems to me that Bayard is clearly wrong insofar as his account leaves no room for the donegality of particular texts. To read a book is to inhabit a thought-world that isn’t mine, one that offers a possibility of apprehending the cosmos in a fundamentally different way. To be invited to spend time in a space that another person has carefully curated is to encounter something that precedes me, that has the possibility of showing me new ways of living—not to lock myself, solipsistically, in a worldview drawn from the finite repository of my own past experience.

Something analogous to donegality, I think, rests at the heart of “biblical theology” as a discipline. The principal difference, of course, is that the Bible speaks to the genuine metaphysical order of real things rather than drawing the heart towards a fictional cosmology. But, in the spirit of Lewis himself, I’d be the first to acknowledge that the line between “myth” and “facticity” may be far blurrier than the dominant Western paradigm permits; if reality does indeed have a narrative structure, it makes sense that we would find ourselves drawn toward those narratives that describe a world in which we long to situate ourselves. And this, at its best, is what the field of biblical theology—with its emphasis on reading Scripture as a cohesive and integrated whole, with a beginning and middle and end—manages to achieve.

All that to say: it seems to me there’s at least one book we shouldn’t try to talk about without having actually read. 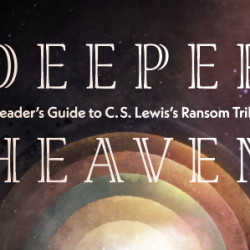 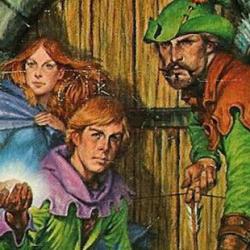