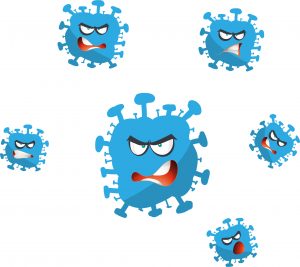 Is Humanity the Real Plague? (Spoiler—No) A Response to Kristal Parks and Matthew Fox

I wish to suggest that the Coronavirus and other very threatening viruses (like Ebola and the Swine flu virus) are the Earth’s way of trying to rid herself of the parasite that is killing her… US. These viruses are like canaries in the mineshaft. And perhaps they are more friend than foe.  –Kristal Parks, “Coronavirus from the Earth’s Point of View.”

Brad, I wonder what you think about Matthew Fox’s response to the Coronavirus in his Daily Meditations? The article is titled “Kali and Coronavirus, continued.”

I think they (Fox and Parks) make several serious mistakes amid their interesting observations. I think it’s always a mistake to regard humanity as a parasite on creation as if we were a foreign intrusion into the biosphere. That’s a very dehumanizing way to view and becomes the far left equivalent to Evangelical fundamentalism’s ‘total depravity.’ This isn’t how God sees us. According to our Judeo-Christian scriptures, humanity truly is the pinnacle and steward of creation, imaging God in this world (cf. Psalm 8). That said, we have abused our God-given place here. We have been exploiters and destroyers rather than faithful stewards of creation. And creation has suffered for it. And that needs to be acknowledged and requires a dramatic change in our way of being (repentance). I found their description of creation fighting back with this virus to be an interesting metaphor, similar to a few biblical metaphors. I’m reminded of Leviticus 18:

24 “‘Do not defile yourselves in any of these ways, because this is how the nations that I am going to drive out before you became defiled. 25 Even the land was defiled, so I punished it for its sin, and the land vomited out its inhabitants. 26 But you must keep my decrees and my laws. The native-born and the foreigners residing among you must not do any of these detestable things, 27 for all these things were done by the people who lived in the land before you, and the land became defiled. 28 And if you defile the land, it will vomit you out as it vomited out the nations that were before you.

I believe this language out not to be literalized … but Parks and Fox virtually do that. Rather, texts like Leviticus or the language we use to describe hurricanes or viruses are anthropomorphic (projecting human traits to non-human forces) and/or phenomenological (language describing how things appear – like a sunrise). Literalizing these metaphors imputes to them malicious intent, just as it had for fundamentalist interpretations of “God’s wrath.” A second error is that they’ve created an us-them dualism between nature and humanity, where nature is good and we are bad and that in this battle, people-destroying viruses are actually weapons for the good of creation and the death of people—esp. the old, the sick, the disabled, the vulnerable—is what? A good thing? I don’t think so. Better to think in terms of divine providence in the midst of tragedy. How this truly is a natural disaster (not an intelligent act of violence by mother earth because we were hurting her) but that within it, God is offering a course correction to our own violence against the earth, which does create havoc and does generate natural disasters that are self-harming for us. So, I want to see the truth of what’s being said here but I would interpret it differently as a Christian who believes God loves people and intends for us to live in fullness of life in communion and harmony with the rest of creation.

Thank you, Brad!  I appreciate your thoughts re. this meditation by Fox. I must say there is a part of me that finds what Fox says making sense to me. It could be that very human, non-gracious, retributive part of me. I sure am wrestling with it all. This has all been stirred up after learning more and agreeing more with the Indigenous people and their early knowing and connection with creation. I’m so angry about how the beauty of their being, born in the image of God with creation, knowing how respect for creation has been “ripped” away from them through colonization and misguided notions of what was required in the name of Christianity. This is the ground for my attraction to Creation Spirituality and the Cosmic Christ (Ilio Delio, Pierre Teilhard des Chardin, etc.). I’m very much a newbie in this domain. I wonder, is this an invitation to the principle of flow, unfolding, evolving that Cynthia Bourgault addresses in her book, The Holy Trinity and the Law of Three?  These are my ponderings these days, especially with Covid-19 lurking about.

Brad, thanks for your response! It is very helpful and a beautiful reminder of the Truth when I notice something in me dropping into desolation and dualistic thinking around what’s happening in our world these days. I’ll add a few comments to what your response evoked in me: As I think about the earth’s retribution, I agree this doesn’t line up with the redemptive knowing I hold deep in my soul. I wonder if the unfolding of natural consequences might have something to do with all that is happening: not being respectful stewards of creation; denying climate change; greed, etc. Did our ‘dark’ ways reach a tipping point? Thank you for your thoughts on the colonizers!  I was especially challenged and provoked by your comment that the virus was the colonizer’s ally against the Indigenous! Again, it isn’t as simple and black-and-white as I judged it to be. Another reminder to hold difficult issues thoughtfully and in a non-dualistic way. But, it feels (for a moment or more) so darn good to be “right” or “righteous” about something. Thank you for knocking me off my “righteous” pedestal. Your comments about reconciliation were so hopeful. May it be so! I wonder if this is why I’m being drawn to a larger understanding of our universe and creation and the Cosmic Christ—dare I say bigger than Scripture’s story (although Scripture’s story leads to this)? What a beautiful thing it will be if this virus and collapse of the markets, etc. wake us up to what it means to be light, healers, respecters of creation and reconcilers in God’s world Brad, your responses are kind and loving and accessible. Thank you, dear brother! Christ is my hope!! Love to you and Eden and a virtual hug.

Evangelicals, I've Got Some Questions For...
All Set Free
Related posts from Brad Jersak