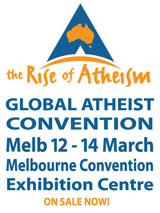 You may have heard of the upcoming 2010 Global Atheist Convention being held in Australian next March. It is beginning to look like it will be one of the largest atheist gatherings ever with an estimated 2000 attendees. However, the Victorian Government is not impressed. They have denied the convention a $250,000 grant which would be given to a religious gathering.

David Nicholls, President of The Atheist Foundation of Australia had this to say in the National Times:

Meanwhile, the Government continues to alienate the majority of Australian voters by kowtowing to a noisy religious minority. In August, the Rudd Government substantially increased funding to non-government schools, ignoring an internal review, which warned of entrenched inequities in the system.

Last week, the ALP announced it will extend Howard’s school chaplaincy program, adding $42.8 million to the $165 million already committed by taxpayers. If children in state schools need counselling, surely funding should go towards providing qualified counsellors, not those who bring only their blue card and religious bias to the table. What will be next? Will Medicare favour faith-healers, over doctors on the basis that they’re “more economical” and “just as effective”? If not, why are our children any less deserving of unbiased, professionally accredited counsellors?

Bowing to pressure from the religious right, Rudd’s Government continues to oppose laws that would grant equality to same-sex couples and ignores the 80 per cent of Australians who favour voluntary euthanasia.

Last week, the Prime Minister graced the Australian Christian Lobby Conference with his presence. He has ignored the Atheist Foundation’s invitation for him to address the Global Atheist Convention to be held in Melbourne next March.

Given Labor’s ungainly lean towards the religious right, it was not altogether surprising when the Atheist Foundation was advised last week that the Brumby Labor Government has rejected the Atheist Convention’s application for funding. The Rise of Atheism Convention will feature some of the world’s most influential public intellectuals, including evolutionary biologist, Richard Dawkins and philosopher Peter Singer. It has attracted worldwide attention, has already sold about 1400 tickets and is on target to sell more than 2000, bringing a considerable amount of publicity and revenue to Victoria.

Despite this, it appears we “do not meet the criteria” for funding, (though we were recently led to believe that having reached ticket sales of 1000, funding was more or less assured). Indeed, we’re rather puzzled that the State Government held on to an application that didn’t meet its criteria for five months. It’s also puzzling that the Parliament of the World’s Religions, a similar gathering, in the same venue starting on December 3, involving a similar exchange of philosophical views qualifies for $4.5 million of government funds – more than 16 times the amount requested for the Global Atheist Convention.”

The article also had this comment from a very sexy man:

The international atheist community is large and well-connected and news that Victoria doesn’t welcome non-theists is already leaking out. Richard Haynes, executive director of the American-based Atheist Nexus represents 13,000 atheists worldwide. In an email to the Atheist Foundation Haynes says, “I seriously doubt the Victorian Government will uphold this injustice. We will reserve judgment for now, but if it stands, rest assured our community will inform the world of their bigotry.”

So, the Australian government will give $4.5 million for religious gatherings of 5,000, but won’t give $1.00 to an atheist convention?

Please let your voice be heard.

November 30, 2009 Cartoon: Get ready it's war on Christmas time!
Recent Comments
0 | Leave a Comment
Browse Our Archives
Follow Us!

Sympathy? Boris Johnson Is Either Stupid or Got...
I am not having a go at Boris Johnson here due to ideological...
view all Nonreligious blogs
What Are Your Thoughts?leave a comment
Copyright 2008-2020, Patheos. All rights reserved.