Sarah Palin is a history denier 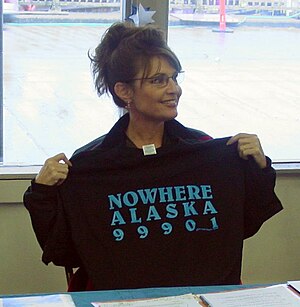 , Michiko Kakutan has this to say about her reference to creationism:

Elsewhere in this volume, she talks about creationism, saying she “didn’t believe in the theory that human beings — thinking, loving beings — originated from fish that sprouted legs and crawled out of the sea” or from “monkeys who eventually swung down from the trees.” In everything that happens to her, from meeting Todd to her selection by Mr. McCain for the Republican ticket, she sees the hand of God: “My life is in His hands. I encourage readers to do what I did many years ago, invite Him in to take over.”

This is a perfect example of why I refer to Palin as a crazy Christian. She, and others who believe this type of creationist silliness, are exactly what Richard Dawkins has labeled them in his new book, The Greatest Show on Earth

: history deniers. This term is usually reserved for the people who deny the Holocaust. However, we have more proof that evolution occurred than we do the Holocaust. Why are the deniers of the latter more crazy than the former?

I’ve said it before and I will say it here again. We need to stop asking people, “Do you believe in evolution?”. It is a proven fact that life on Earth has gradually evolved from simple to more complex (for the most part) over millions of years. The theory of how it occurred is called Natural Selection.

November 16, 2009 Name or Caption this Palin 2012 picture!
Recent Comments
0 | Leave a Comment
"The fool says in his heart: I am in the mood for Mexican - let's ..."
a_b704 Richard Dawkins Is NOT An Atheist!
"Yes. All you have to do is observe and document the various behaviors of social ..."
evodevo Original Sin and the Origin of ..."
"Let's summarise, two NON ATHEIST guys break into an atheist's house, kill his wife, rape ..."
Ian Brooks Duck Dynasty’s Phil Robertson says if ..."
"I love Christmastime. I decorate, wrap, bake,listen to cheesy music..everything except the church part. I ..."
Nankay Call Me A Christmas Loving Atheist
Browse Our Archives
Follow Us!

Nonreligious
The universe should be more awe-inspiring to an...
Brother Richard's Life Without Faith