Will Phillips and the sanctity of marriage

I have nothing but respect and admiration for 10-year-old Will Phillips.

If you haven’t heard, he is the boy from Arkansas, who has refused to say the pledge of allegiance until there is truly “liberty and justice for all.” For him, this would occur when homosexuals are allowed to get married.

You gotta love the quote: “I eventually, very solemnly, with a little bit of malice in my voice, said ‘Ma’am, with all do respect, you can go jump off a bridge.'”

I am always confused as to why this issue is about anything other than civil rights. Since marriage is a religious term, perhaps the government should only grant “civil unions” for heterosexuals and homosexuals. Let individuals, their families, and their churches, determine whether they want to call it marriage.

Also, I am sick and tired of people crying about the sanctity of marriage. The true threat to to marriage is allowing people like of Britney Spears to get married. Hell, and divorce is a huge threat to marriage. Why don’t we hear more religious people pushing to make it illegal?

I believe the below picture says it all. 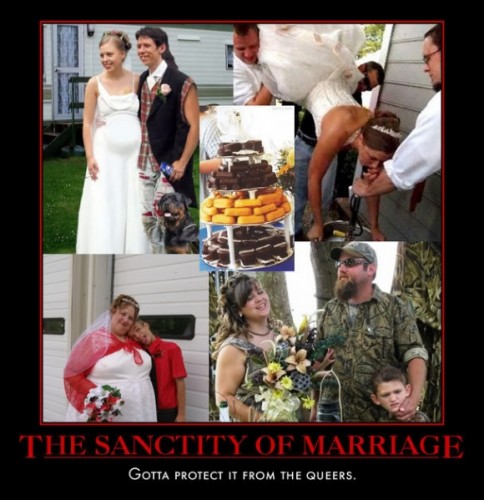