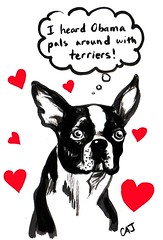 You would think someone with a BA and MDiv degrees, and who had done some graduate work at Harvard Divinity School, would be somewhat intelligent. Unfortunately this is not the case with J. Grant Swank, pastor of the New Hope Church in Windham, Maine. Last week he wrote this on the Renew America website:

Sarah Palin’s deity is the God of the Bible. Her personal Savior is Jesus Christ. Her holy writ is the infallible, inerrant Bible. Her hope for eternity is heaven as described in the Word of God. Her hope for the present is God&apos;s will activated in her dedication.

Barack Hussein Obama’s deity is the god of the Koran — Allah. His personal savior is Allah, though he professes to be a Protestant via his membership in the theologically liberal United Church of Christ (Congregational / UCC). That would make him out to be a witness to Jesus Christ; of course, that is bogus, including his testimony that at an altar at Chicago’s Trinity UCC he discovered Christ. If it was Christ, it is not the Christ of the New Testament.

Obama’s so-called holy writ is the abominable Koran. His hope for eternity is unknown; but if he becomes a suicide bomber for Allah, he will be guaranteed pronto a score of virgins for everlasting. His hope for the present seems to be his reliance upon Islam’s Koran furthered by his clandestine support of Islam World Rule via czars and a shadow government given to overthrowing our Republic.

Then a couple days ago he wrote this:

It is the same in Afghanistan. Muslim Obama is bound to protect US Muslim militia from killing Afghan Muslim killers. What restrictions then will Obama put on troops newly sent to Afghanistan? When will the public find out about them?

Obama has worked his popularity into a macabre corner. He has brought the horrific dilemma on himself. America will pay the bloody price for it.

If you would like to encourage Renew America to remove the hate speech of J. Grant Swank from their website, here’s their email: info@renewamerica.com.