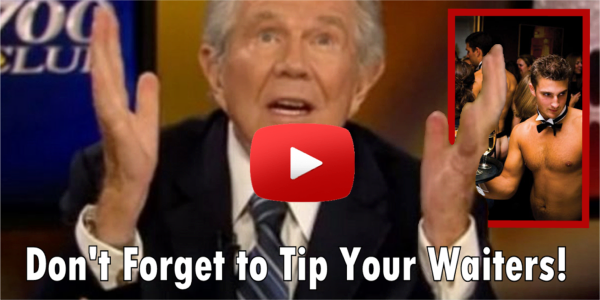 Inevitably, whenever I make a post about Pat Robertson, I get comments asking why I even bother. He’s old. He’ll die soon. Quit giving this douchebag attention. No one cares about him anymore. Regardless, as one who has a pretty good understanding of modern evangelical theology, I contend that Robertson’s views are quite mainstream. The only difference is that modern apologists have adopted phraseology that is meant to come across as less judgmental. They now say things like, “God loves the sinner but only hates the sin,” and “Being gay isn’t a sin, acting upon it is.”

When I wrote about Robertson telling parents that they should not attend the wedding of their gay child, he was representing the mainstream evangelical mindset, and I believe that we are foolish to simply dismiss him. Let me remind you that the Christian Broadcasting Network (just one of the nonprofits associated with Robertson) still brings in nearly $300 million dollars annually. The man still has clout, and much more influence than all of the LGBT and nontheist organizations combined.

Further understanding of the contemporary evangelical belief system is reflected in two recent statements made by Robertson.

The first appears in this video where Robertson responds to a viewer who asks about their recently married son and his husband’s desire to adopt a child. Here’s Pat:

The argument that those in “this so-called lifestyle” are trying to “destroy marriage,” is more prevalent than you might think. I have heard several (otherwise pleasant Christians) argue that allowing same-sex couples to marry would violate the rights of heterosexuals, by redefining their definition of marriage. Of course, I always respond that no one is going to force them to marry anyone, but they just don’t get it. Perhaps they should adopt the stance of the Puritans when they came to the Americas. I recently wrote how they saw marriage as a legal institution only that was in no way religious.

In the second video, a viewer asks Roberston: “Why is it necessary for the government to legislate that Christians act Christ-like?” He states that he thinks Jesus shakes his heading saying, “That’s not what I meant!” every time Christians refuse to serve people because of their lifestyle. Again, here’s Pat:

Concerning the words in Corinthians attributed to the Apostle Paul, Robertson is taking them a little out of context. They state that there is only one god, and that the meat sacrificed to idols should only be avoided if your brother sees you eating it, and it causes him to stumble. Furthermore, Paul begins discussing these sacrifices saying that all things were lawful for him, but not necessarily helpful. So, I guess if there is no other Christians around, the threesomes are back on! Just don’t forget your coupons.

March 26, 2015
Inspiration: Carl Sagan was right "We are made of Starstuff."
Next Post

March 31, 2015 Model and ‘Miss BumBum’ Runner-Up Has Found God and Clothing
Recent Comments
0 | Leave a Comment
"Marriage can be a religious if you choose it to be. In reality it is ..."
4th and Main Mike Huckabee: Ignoring the Supreme Court ..."
"Huh?"
Jim E Jones Why I Am Proud to Be ..."
"The fool says in his heart: I am in the mood for Mexican - let's ..."
a_b704 Richard Dawkins Is NOT An Atheist!
"Yes. All you have to do is observe and document the various behaviors of social ..."
evodevo Original Sin and the Origin of ..."
Browse Our Archives
get the latest from
Nonreligious
Sign up for our newsletter
POPULAR AT PATHEOS Nonreligious
1