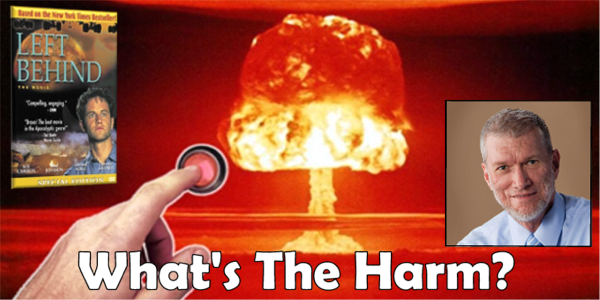 What’s the big deal? So what? Why can’t we all just get along? How does my religious belief hurt you?

While I’m usually a “peace and love” type of guy, I clearly understand that there is a difference between supporting someone’s right to hold a belief, and respecting it. This is especially true when that belief is spouted in the public marketplace of ideas or in the halls of government.

We all get a kick out of the seemingly ridiculous ramblings of Ken Ham, but I don’t think we realize just how influential his teachings actually are. While respectable scientists have continued to work comfortably within their cocoons of non-overlapping magisteria, nearly half of the United States population believes that the Earth is less than 10,000 years old. And we harm our own cause when we simply dismiss them all as inbred idiots.

I have often been asked, besides promoting basic education, why should one care about other’s religious beliefs? Well, here’s one reason.

Being the nerd that I am, I am skeptically enthusiastic by the recent words of NASA scientist Ellen Stofan, who says that there is strong indication that we will have definitive evidence of alien life within 20 or 30 years. Who could argue that this would be one of the most amazing discoveries in modern history? Why shouldn’t a significant portion of NASA’s relative miniscule budget be allocated to this discovery?

Even though he has attempted to clarify his statements, Ken Ham, on an episode of the Ray Comfort’s, The Comfort Show, said NASA was wasting its time and money on searching for alien life. The co-host of the show, Emeal Zwayne, even suggested taxpayer money could be better spent on building Noah’s ark theme parks like the one Ham is building in Kentucky. Granted, this was said jokingly, however, Ham did attempt to use 18 million dollars of tax breaks to finance the project. Are we really supposed to believe he wouldn’t gladly take even more public monies to finance such operations?

If you can stomach it, here is the entire episode of Ray’s show, which just happens to be entitled, “Aliens Go to Hell?”

Perhaps some of you are saying, “Big deal. Finding life on other planets would be great, but it doesn’t affect my life here and now.” Or maybe some of you are taking the Jefferson approach of, “If it neither breaks my leg nor picks my pocket, what difference is it to me?”

Well, in a recent blog post, Ham has shown exactly how his theology can harm you.

April 12, 2015 Tim Ferriss Interviews Glenn Beck and Sets an Example
Recent Comments
0 | Leave a Comment
Browse Our Archives
get the latest from
Nonreligious
Sign up for our newsletter
POPULAR AT PATHEOS Nonreligious
1

Exposed: the evangelist who was assaulted...
The Freethinker
Related posts from Brother Richard's Life Without Faith