I apologize for dooming America by mocking Pat Robertson 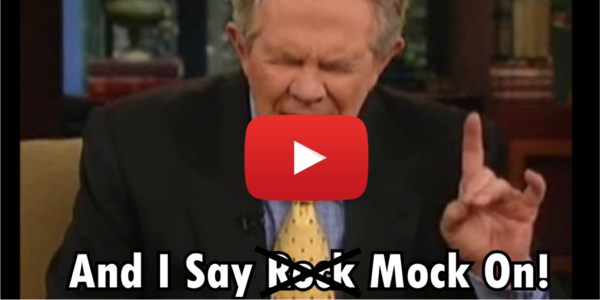 Well crap. I guess I am going to have to stop ridiculing Pat Robertson. My posts about him are never the most popular, but I enjoy them so.

In the below video, Robertson warns that people like me, who mock fundamentalists, need to wake up. Because:

“Sooner or later, a holy God is going to say, ‘I’ve had enough with you, I’ve had enough, my hands are going to be taken off your nation. People mock the word of God and those who proclaim it are laughed at as fundamentalists. Well, we need the fundamentalists because if we don’t have them this nation is doomed.”

Now, I would love to point out that Robertson just warned that the Supreme Court is deciding to bring in “sodomy, and put it in the Constitution,” but that would be wrong.

Heck, guess I will also have to stop asking serious questions like Does Pat Robertson represented mainstream Christianity when he speaks about gay marriage?

Thanks Pat, It’s been fun.

April 28, 2015
The Gideons did not rush Bibles to Nepal. They were already there.
Next Post

May 4, 2015 Are the terrorists winning?
Recent Comments
0 | Leave a Comment
Browse Our Archives
get the latest from
Nonreligious
Sign up for our newsletter
POPULAR AT PATHEOS Nonreligious
1