Indiana’s ‘Religious Freedom’ Law and The First Church of Cannabis 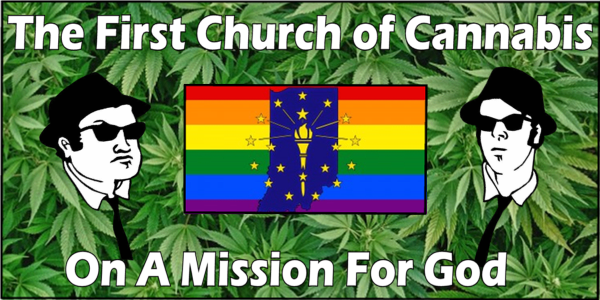 In what should have been a great April Fool’s joke, Chicago’s Eyewitness News reported yesterday that Indiana’s Religious Freedom Restoration Act (RFRA) has allowed for the approval of “The First Church of Cannabis.”

Quoting a line from one of my favorite movies, church founder Bill Levin said: “I’m on a mission from God.” The idea to start the church came to him late last month, when RFRA made it clear that religion was now governing the state of Indiana. Levin thought that maybe he would get “200-300 people from Indiana” to join his cause, but that he was “going to have the most popular religion in the country.”

As of this morning, The First Church of Cannabis Facebook page had nearly 21,000 likes, and it has garnered attention from the likes of Seth Rogan (surprise, surprise) who tweeted: “Looks like Indiana accidentally created a religion I can get behind.”

Marijuana is currently still illegal in Indiana, but the church, which is now trying to find a location for its “sanctuary,” might change that for people who use it religiously (pun intended). At least, according to Indiana lawyer, Abdul-Hakim Shabazz.

Shabazz, who wrote that he doesn’t smoke pot because it dulls his hatred of people, believes that if you can “show that reefer is part of your religious practices, you got a pretty good shot of getting off scott-free.” Here’s his argument:

Remember, under RFRA, the state has to articulate a compelling interest in preventing you from smoking pot. I argue they can’t. First of all, by my last count, about 19 states and the District of Columbia have decriminalized possession of small amounts of marijuana. Nearly two dozen states have decriminalized marijuana for medical purposes. And if I can use pot to help heal my body, why can’t I use it to help heal my soul? And even at the federal level Sen. Rand Paul, R-Kentucky, is working with Sen. Cory Booker, D-New Jersey, and Sen. Kirsten Gillibrand, D-New York, to reclassify marijuana from a Schedule I to a Schedule II drug, which means it would go from a narcotic with no use to one with low risk and recognizable medical benefits. And four states as well as the District of Columbia have outright legalized marijuana. Which reminds me, I have friends in Seattle and I really need to get back out there this summer and pay them a visit.

Finally, here’s a clip from the church founder’s appearance on CNN yesterday:

Ha! I love this guy.

I always joke that my atheist church only requests 6.66% of your income, but Cannabis Church is even less expensive. That is, unless $4.20 represents the majority of the allowance your parents give you for living in their basement while you eat Fruit Loops and watch Cartoon Network all day.

March 31, 2015
Model and ‘Miss BumBum’ Runner-Up Has Found God and Clothing
Next Post

April 5, 2015 The 'reason' for celebrating Easter as an atheist
Recent Comments
0 | Leave a Comment
"Marriage can be a religious if you choose it to be. In reality it is ..."
4th and Main Mike Huckabee: Ignoring the Supreme Court ..."
"Huh?"
Jim E Jones Why I Am Proud to Be ..."
"The fool says in his heart: I am in the mood for Mexican - let's ..."
a_b704 Richard Dawkins Is NOT An Atheist!
"Yes. All you have to do is observe and document the various behaviors of social ..."
evodevo Original Sin and the Origin of ..."
Browse Our Archives
get the latest from
Nonreligious
Sign up for our newsletter
POPULAR AT PATHEOS Nonreligious
1