Marco Rubio says homosexuality is not a choice, but remains against same-sex marriage

Marco Rubio says homosexuality is not a choice, but remains against same-sex marriage April 20, 2015 Richard Haynes 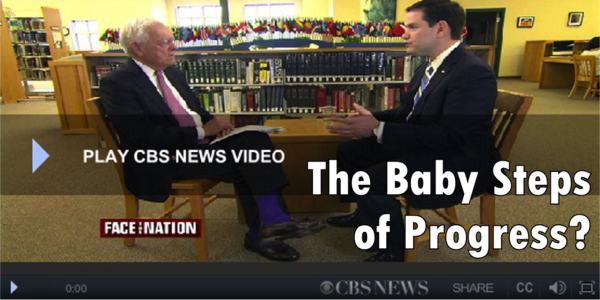 Yesterday was an interesting day on CBS News. First, Sunday morning featured an interview with three atheists who were promoting the “Openly Secular” campaign, and then Face the Nation had an interesting interview with Presidential hopeful Sen. Marko Rubio. I remain skeptical of Rubio because, as I pointed out, he is not sure about the age of the Earth, and he has associations with an “odd” fundamentalist church (which can be dangerous and harmful to all us). However, I gave Obama the benefit of the doubt for his religious affiliations, so I will grant Rubio the same courtesy.

Here is the video from Face the Nation:

While Rubio could not be more wrong on Climate Change, he shows some progress on the marriage equality front. I am sure many evangelical Christians will give him hell for saying that sexual preference is not a choice, but at least he is admitting that small part of the truth.

“It’s not that I’m against gay marriage. I believe the definition of the institution of marriage should be between one man and one woman. States have always regulated marriage, and if states wants to have a different definition, you should petition the state legislature and have a political debate. I don’t think courts should be making that decision, and I don’t believe same-sex marriage is a constitutional right.”

As much as we may disagree, at least this is something we can work with.

As many of you know, I am huge supporter of marriage equality, and I even got secularly ordained (the origin of the “Brother Richard” moniker I gave up trying to avoid) to perform same-sex weddings. However, the “state rights vs. federal law” argument is intriguing.

Ultimately, I believe we cannot have it both ways. If marriage is a religious contract, then no government institution should be involved at all. However, if it is a civic union, for tax and other purposes, than our governments cannot discriminate against anyone. Period. End of discussion.

As I wrote in a post about the supposed “Oklahoma ban on atheist marriages” (that was designed to prevent same-sex unions), I believe we should return to the old Puritan ways. You can read the article for the full story, but in “early New England, marriage was not seen to be a sacred rite, but as legal contract, or ‘civil union,’ useful upholding property rights and other civil laws. All Puritan wedding ceremonies were performed not by the clergy, but by civil magistrates.”

So, let’s return to good ol’ days. Civil unions for all! It’s what our godly founders wanted.

April 21, 2015 Google joins the search for the Loch Ness Monster
Recent Comments
0 | Leave a Comment
Browse Our Archives
get the latest from
Nonreligious
Sign up for our newsletter
POPULAR AT PATHEOS Nonreligious
1