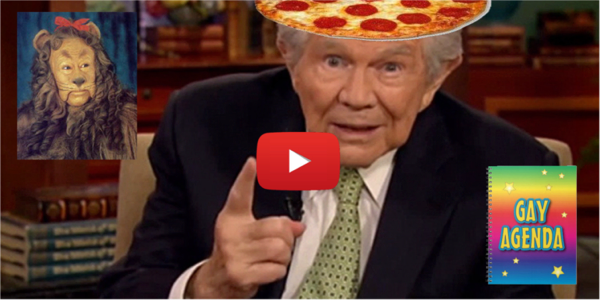 I don’t know why I enjoy Robertson so much, perhaps it is because I was such a fan of his back in the day, and that I was, and/or he has become so crazy. Or, it’s because he ran for President in 1988.

So, where’s the science? Here’s Pat:

Boom! I believe that is called “checkmate.” As a man of science, Pat wants to see the butt babies. Why don’t you people get it? It’s just like the old “Adam and Steve argument.”

On top of that, I bet you didn’t know that a major focus of the gay agenda was to destroy Christian values. And forget the Log Cabin Republicans, Pat just uncovered another “vast left-wing conspiracy.”

It’s gloomy and rainy in Georgia today; so how about a two-for-Tuesday?

It’s getting late and I have a desire to go watch reruns of the 1980s show Beauty and the Beast. There’s something about Ron Perlman as Vincent. 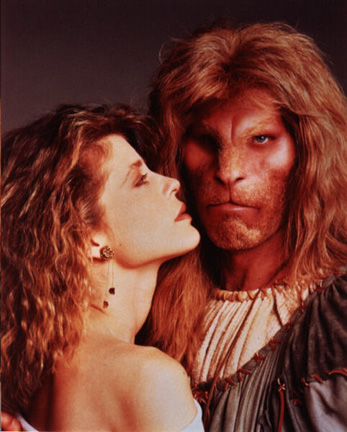 Oh, real quick, Pat did get one thing right. What same-sex marriage worth its salt would ever serve pizza at the reception? Part of the reason we breeders go to these events is for the fabulous food.

April 5, 2015
The 'reason' for celebrating Easter as an atheist
Next Post

April 9, 2015 How Religious Beliefs Can Threaten Progress and Perhaps Our Existence
Recent Comments
0 | Leave a Comment
"Marriage can be a religious if you choose it to be. In reality it is ..."
4th and Main Mike Huckabee: Ignoring the Supreme Court ..."
"Huh?"
Jim E Jones Why I Am Proud to Be ..."
"The fool says in his heart: I am in the mood for Mexican - let's ..."
a_b704 Richard Dawkins Is NOT An Atheist!
"Yes. All you have to do is observe and document the various behaviors of social ..."
evodevo Original Sin and the Origin of ..."
Browse Our Archives
get the latest from
Nonreligious
Sign up for our newsletter
POPULAR AT PATHEOS Nonreligious
1

Beach Reach: What It's Really About
Roll to Disbelieve
Related posts from Brother Richard's Life Without Faith