The United States Supreme Court is expected to make a ruling concerning same-sex marriage at some point this month, and many, including Rolling Stone’s David S. Cohen, are predicting it will be “a historic 5-4 decision for equality.” 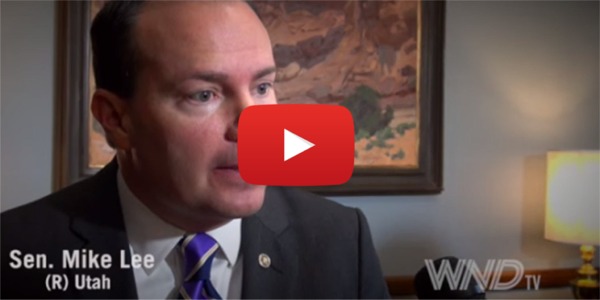 In anticipation of such a ruling, Utah Senator Mike Lee has reintroduced the 2013 “Marriage and Religious Freedom Act” (S.1808). Here’s the news segment about it from Salt Lake City’s Fox 13:

So, to clarify, Sen. Lee believes:

“If the government recognizes a right to same-sex marriage, you could at some point have a move by the government, a move perhaps by the IRS, to remove the tax exempt status of any religiously affiliated educational institution.”

Just in case it could be claimed that his words were taken out of context, this is how he replied to WorldNetDaily.com when asked what America could look like if same-sex marriage is legalized.

So, again he states:

“I fear that what could happen is that the government could start discriminating against religious individuals and religious institutions that have a religious belief about the definition of marriage. I don’t want that to happen. I hesitate to even imagine what an America that would have that as part of its legal system would look like. That’s why we need to pass this bill. We need to not allow the government to even think about retaliating against religious individuals or institutions.”

Other than fear mongering and paranoid fears of persecution, there is no reason to believe marriage equality would threaten anyone’s freedom of religion.

The 14th Amendment, which granted citizenship to “all persons born or naturalized in the United States,” was ratified 147 years ago. It was in 1967, 48 years ago, that the U.S. Supreme Court guaranteed marriage equality for interracial couples in Loving v. Virginia (388 U.S. 1). And yet the KKK still has the constitutional right to exist.

Whether they are accepted or not, it should be pointed out that the Klan is a non-profit religious organization. Remember this picture?

If you have any doubt, the Knights’ Party Platform clearly defends that “America was founded as a Christian nation.” Also, you can listen to the national director of the Klan, Baptist Pastor Thomas Robb His sermons can be watched on Sundays at 11 AM CST (www.sotctv.com). Or, check out the Thomas Robb Ministries website.

So, if you share the same fears as Sen. Mike Lee, relax. If the Supreme Court rules in favor of true equality,  your bigotry will be safe.

June 10, 2015 Video: Pat Robertson on Why God Allows Babies to Die
Recent Comments
0 | Leave a Comment
Browse Our Archives
get the latest from
Nonreligious
Sign up for our newsletter
POPULAR AT PATHEOS Nonreligious
1