Bill Burr and the Prophetic Power of Comedy 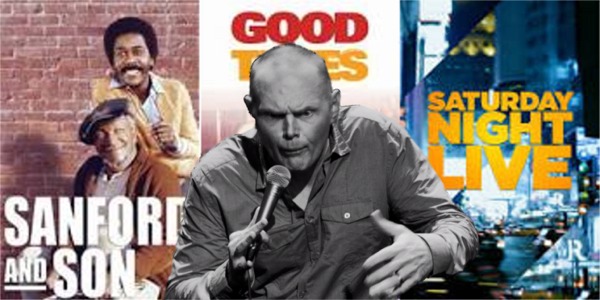 Not only is laughter the best medicine, it’s a damn good teacher.

I have always been enthralled with comedians. As a young kid, my parents forbid me to watch the edgy new show Saturday Night Live. So, I would wait until they thought I was a sleep, and then stealthily crawl behind the sofa to watch. I just had to see what Belushi would do next. Plus, the early years had freaking Muppets!

It was from watching SNL that I first became aware of the comedy prophets Richard Pryor and George Carlin. I was blown away with how they could present controversial topics. Even if you disagreed with them, they made you laugh. And think. This led to my secret acquisition of multiple comedy LPs which I had to listen to with the volume very low. My mom would have exploded if she heard the copious amount of F-bombs.

As I write this, I am reminded that 1970s TV, in general, used comedy to deal with taboo topics. The show Maude dealt with abortion, and on Good Times, Florida Evans had to cope with her son Michael’s atheism. Hell, just watch a couple of episodes of Sandford and Son. The major television networks are so in fear of the religious and PC police that they wouldn’t dare allow a show like that on the air today. CNN recently ran a special about this golden age of TV, and it’s definitely worth watching.

Likewise, today’s comedians are altering their routines to avoid outrage. Case in point, Jerry Seinfeld, one of the most vanilla comedians around, recently said that he would no longer do college tours because they were too politically correct, and that kids didn’t really understand racism and sexism.  Nevertheless, there are still some comedians who choose not to run from controversial topics. A perfect example is Comedy Central’s new special: Jeff Ross Roasts Criminals: Live at Brazos County Jail. It’s edgy, hilarious, and at times, down right depressing. While most would not sit down and watch a documentary on prison life, Ross educates in the same way about the prison industrial complex.

I said all of this to bring your attention to Bill Burr’s new special which is being featured on Netflix. It is entitled: Bill Burr: I’m Sorry You Feel That Way. Of course, he’s irreverent and crass, but at the same time, he delivers a remarkable message about letting go of religion. Here’s that excerpt. (FYI: It should go without saying, but he says lots of naughty words.)

There you go. I’m blown away. In twelve minutes, Burr presents almost everything I have been preaching for nearly ten years!

Many may disagree with me, but I believe this is a perfect example of the beauty and power of comedy.

June 26, 2015
Talking Points For The Victory of Marriage Equality
Next Post

June 28, 2015 Sunday Sermon: Christian Pastor Decides To Marry Bacon
Recent Comments
0 | Leave a Comment
"The fool says in his heart: I am in the mood for Mexican - let's ..."
a_b704 Richard Dawkins Is NOT An Atheist!
"Yes. All you have to do is observe and document the various behaviors of social ..."
evodevo Original Sin and the Origin of ..."
"Let's summarise, two NON ATHEIST guys break into an atheist's house, kill his wife, rape ..."
Ian Brooks Duck Dynasty’s Phil Robertson says if ..."
"I love Christmastime. I decorate, wrap, bake,listen to cheesy music..everything except the church part. I ..."
Nankay Call Me A Christmas Loving Atheist
Browse Our Archives
Follow Us!