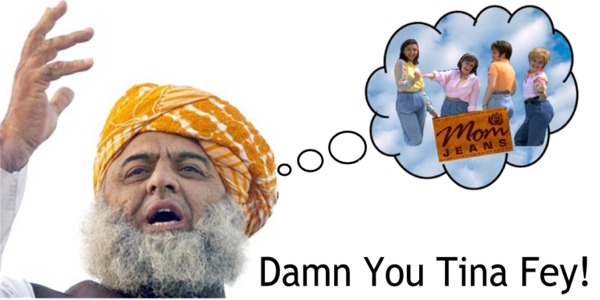 Blaming homosexuals for natural disasters is so yesterday. Besides, now they can marry in the majority of the United States, and they haven’t caused the end of life as we know it. Therefore, we need a new scapegoat to blame for all the earthquakes and tsunamis?

The New Indian Express is reporting that the good cleric held a press conference and requested the Pakistani military be used to “launch a military operation against women wearing jeans all over Pakistan.” According to him, it is these women’s “immodesty” that not only are the impetus of cataclysmic events, but they also cause inflation, decreased energy supplies, and threaten the overall security of Pakistan.

“Fazlur Rehman went on to say that a woman who is not covered like a ‘sack of flour’ is a mobile weapon of mass destruction for her state and that Pakistan has multitude of such nuclear missiles in all its major cities.”

So what’s the solution?

“Fazlur Rehman was suggesting that, if these women are wrapped in sacks and kept inside homes and if the Shariah law was in place, then the Taliban brothers would not be attacking Pakistan.”

So, the old song was right. The devil does wear blue jeans, and she needs to shut up and submit.

June 3, 2015 Rick Santorum Says Pope Francis Should Leave Science to the Scientist
Recent Comments
0 | Leave a Comment
Browse Our Archives
get the latest from
Nonreligious
Sign up for our newsletter
POPULAR AT PATHEOS Nonreligious
1