Mike Huckabee: Ignoring the Supreme Court on Same-Sex Marriage and The Solution to Racism 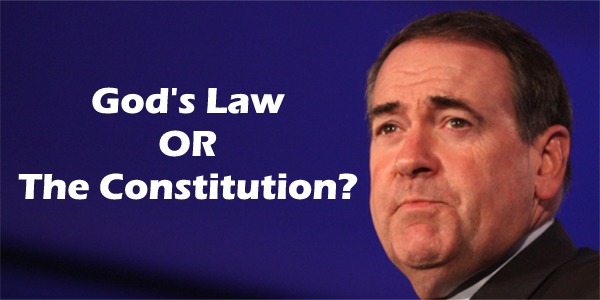 For a moment, please set aside your theism or atheism.

Freedom of religion and the separation of church and state are sacred (pun intended) in the United States. I personally do not care whether my elected officials are religious or nonreligious, but I do expect them to hold their office in a secular fashion. And until the 1980s, this is how the majority of American citizens felt.

That being said, despite your position on faith, Mike Huckabee has repeatedly made it evident that he is unfit to be the President of the United States. Just in the past couple days alone, he has twice demonstrated that he would not uphold the Constitution, but would instead promote his brand of Christianity.

In an interview on the Deace Show Podcast, Huckabee declared that if he would was elected, he would ignore any ruling by the Supreme Court that was in support of marriage equality. Ignoring the precedents set by the 14th, 15th, and 19th amendments, he said that Congress would have to first determine that same-sex marriage was legal across the entire nation.

Even if he had a valid argument, which he doesn’t, he went on to say:

“Until the Congress of the United States puts on my desk a bill that basically defies the laws of Nature and Nature’s God and defies the longstanding tradition of marriage, the federal government will not recognize same-sex marriage because there is no law that requires it and that would be true for the military and it would be true for all federal institutions. If the Congress decides that they want to pass enabling legislation, they could put it on my desk and I would veto it, and they can attempt to override it. That’s the process” (emphasis mine).

“If liberals were subjected to a conservative court that forced them to tithe their income to scripture or forced them to go to church or forced them to believe something that they don’t want to believe, they would say, ‘We can’t do that, that would go against our conscience.’ And I would say, ‘You are exactly right and we can’t have such a ruling. This is why I find this very unsettling is because liberals will rue the day when the sword they use to enact their agenda is the sword of the court rather than to do it by way of the people’s elected representatives.”

Side Note: That last quote is ridiculous and unfounded. I’ve already established why believers should not fear the Supreme Court ruling in favor of same-sex marriage. So, I won’t rehash it here. This is simply fearmongering.

You can download the entire podcast here, but here are two audio clip from Right Wing Watch:

It came out yesterday that during a Fox News Interview, Huckabee said the following about the Confederate Flag and racism:

“When I love God and I know that God created other people regardless of their color as much as he made me, I don’t have a problem with racism. It’s solved” (again my emphasis).

Here’s a video clip of that exchange:

If only during slavery someone in the South had preached religious conversion. I’m sure we would live in a different America. There would have been no Civil War. No racism. No Jim Crow. It all could have been “solved” then.

Or, perhaps, everyone in the freaking South (especially slave owners) were all about salvation. Read a book Huck. Perhaps some Frederick Douglas. The man wrote that Christian slave owners were the ones to be feared the most.

Even if you put this truth aside, combine the information in these two interview, and it is abundantly clear that Huckabee has disqualified himself as a valid candidate for the office of President.

Come on Republicans, your missing out on potentially millions of secular voters, theists and atheists alike.

June 25, 2015 Bobby Jindal's Intelligently Designed and Demon Haunted World
Recent Comments
0 | Leave a Comment
Browse Our Archives
get the latest from
Nonreligious
Sign up for our newsletter
POPULAR AT PATHEOS Nonreligious
1