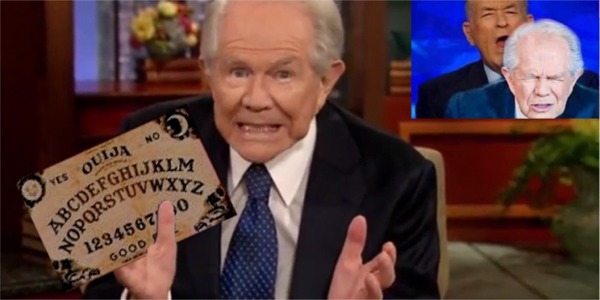 I know I promised, for the sake of America, I would no longer mock Pat Robertson. So, please don’t think I am doing so now. Think of this post as a public service announcement. The message in this video is something you occult loving sexual deviants need to hear.

That’s right. If your kid is rebellious and you think they might have some mental issues, it’s probably because you either played with an Ouija board as a kid, or because you saw an X-rated movie.

Why would God punish your kid for something you did as a child? Because, that is how he does things. Numbers 14:18 tells us that “he punishes the children for the sin of the parents to the third and fourth generation.”

And don’t try to use the excuse of “I didn’t know any better.” Did that excuse work for Adam and Eve? Of course not. The entire world got screwed because of what they did when they had no knowledge of good and evil. What’s not fair about that? It’s just the simply godly justice America was founded upon.

You have been warned.

June 5, 2015 Pamela Geller and Blasphemy Laws. Surrender is Submission
Recent Comments
0 | Leave a Comment
"Marriage can be a religious if you choose it to be. In reality it is ..."
4th and Main Mike Huckabee: Ignoring the Supreme Court ..."
"Huh?"
Jim E Jones Why I Am Proud to Be ..."
"The fool says in his heart: I am in the mood for Mexican - let's ..."
a_b704 Richard Dawkins Is NOT An Atheist!
"Yes. All you have to do is observe and document the various behaviors of social ..."
evodevo Original Sin and the Origin of ..."
Browse Our Archives
get the latest from
Nonreligious
Sign up for our newsletter
POPULAR AT PATHEOS Nonreligious
1