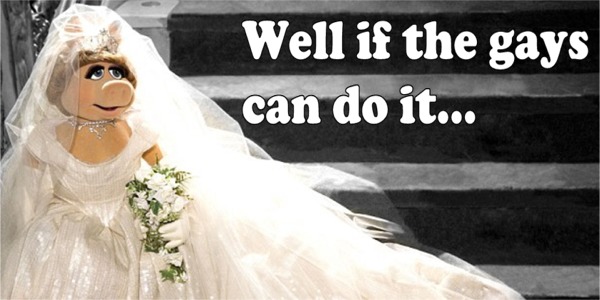 It’s no surprise that several (but not all) Christian ministers are upset with the Supreme Court’s ruling on same-sex marriage.

Rainbow jihadists of SCOTUS blow up twin towers of truth and righteousness.

The Bible is not silent about such decisions. Alongside its clearest explanation of the sin of homosexual intercourse (Romans 1:24–27) stands the indictment of the approval and institutionalization of it. Though people know intuitively that homosexual acts (along with gossip, slander, insolence, haughtiness, boasting, faithlessness, heartlessness, ruthlessness) are sin, “they not only do them but give approval to those who practice them” (Romans 1:29–32). “I tell you even with tears, that many glory in their shame” (Philippians 3:18–19).

This is what the highest court in our land did today — knowing these deeds are wrong, “yet approving those who practice them.

Founder of the Michigan based “Revive Alive Missional Ministry,” Stacy Swimp, went to Facebook to make these two statements:

Did You Know: The SCOTUS ruling on so called same sex marriage ended religious freedom for Christians in the United States. Sadly, with the SCOTUS decision, what we are going to behold is lascivious homosexual conduct around the nation that is absolutely determined to silence the church.

Perhaps to separate himself from that crazy bunch, one minister in particular, told The Blaze that he decided to “illustrate the absurd with the absurd.”

With a bad attempt to channel Jonathan Swift, Ohio Pastor David Vaughan, wrote this on his church’s website:

Now that the Supreme Court has ruled that everyone has a constitutional right to marry anyone (or anything), I have come to a huge decision. I have decided to marry bacon.

Vaughan goes on to confesses that he has been preoccupied with pork since he was 12, and since he isn’t Jewish, and because Jesus never specifically prohibited marrying bacon, it should be okay to sanctify his getting porked.

Similarly, Vaughan declares that since the definition of marriage has evolved, his “sizzling union” (see what he did there) is protected by the Constitution.

Overflowing with wittiness, Vaughan ends his modest proposal with these words:

I’ll proudly wear the LGBT label too. Loving Great Bacon Tremendously. It is a civil right and will lower the humiliation of others who have been ham-hiding. I’m also looking for a church that will accept bacon every day, and not just once in a while at the Saturday men’s breakfast. Studies and stats have shown that accepting me and my bacon will likely doom that church, but that’s alright. The church should comply with this and any other cultural shift.

That’s it. Just wanted you to know. I’ll be doing the ceremony downtown on Fountain Square. Probably during the Flying Pig. I feel so liberated now. Who knows, someday I may also re-identify myself as scrambled eggs to be a better match for bacon. But that would be ridiculous.

My brain hurts. Does anyone really think this is clever?

While Kermit the Frog might understand Vaughan’s sexual proclivities, I think the good Pastor needs to take a class on logical fallacies.

June 27, 2015
Bill Burr and the Prophetic Power of Comedy
Next Post

June 29, 2015 Marriage Equality and the Myth of Christian Persecution
Recent Comments
0 | Leave a Comment
Browse Our Archives
Follow Us!