Talking Points For The Victory of Marriage Equality 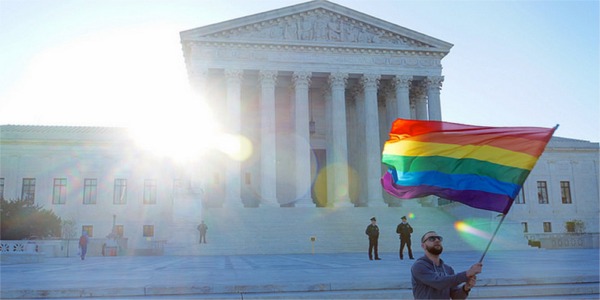 It’s official. In a 5-4 decision, The Supreme Court has ruled that all 50 states must allow for same-sex marriage. It is a true victory for equality.

While we are all taking a moment to celebrate, it’s time to get ready for the religious folk who oppose equality to begin freaking out. They will declare that their rights are being threatened. They will preach that the government will step in and force them to perform same-sex marriages. Presidential candidates like Mike Huckabee have said that if elected they will ignore the supreme court ruling, and as I write this, Glenn Beck is expressing the fear of religious oppression. Believe me, if that happens, true lovers of liberty will come to their defense. Nonetheless, this will not happen.

Here are a couple points that might be helpful in conversations you will be having over the next few days:

I recently wrote about the precedence that proves that people will continue have the right to maintain their bigotry. Here’s an excerpt that may be useful as you are discussing this issue.

The 14th Amendment, which granted citizenship to “all persons born or naturalized in the United States,” was ratified 147 years ago. It was in 1967, 48 years ago, that the U.S. Supreme Court guaranteed marriage equality for interracial couples in Loving v. Virginia (388 U.S. 1). And yet the KKK still has the constitutional right to exist.

Whether they are accepted or not, it should be pointed out that the Klan is a non-profit religious organization. Remember this picture?

If you have any doubt, the Knights’ Party Platform clearly defends that “America was founded as a Christian nation.” Also, you can listen to the national director of the Klan, Baptist Pastor Thomas Robb His sermons can be watched on Sundays at 11 AM CST (www.sotctv.com). Or, check out the Thomas Robb Ministries website.

The Puritan Founders Embraced Civil Unions For All

Concerning the argument that the United States was founded as a “Christian nation,” I wrote the following:

Quite often we hear these same ignorant arguments from elected officials who claim the United States to be a Christian nation designed to be, as John Winthrop entitled, God’s “city upon a hill.” The infamous phrase comes from Winthrop’s 1630 sermon aboard the Arbella, to a ship full of future Massachusetts Bay colonists who were bound for Boston.

Incessantly, lawmakers spout the virtues of New England, and pronounce it the blueprint for America. Now, it would be easy to rant about how these colonists treated the natives (even though, for the most part, they were saints compared to the colonists of Virginia). I could just as easily rage on about how Puritan tolerance was only extended to others who shared their same religion (Mary Dyer and other Quakers were executed). I could even argue that a lot changed in the Americas during the 172 years between the abovementioned sermon of Winthrop, and Thomas Jefferson’s letter to the Danbury Baptists, which declared a wall of separation Church and State. But none of these are necessary for the dispute at hand.

For the sake of argument, let’s grant the Puritans of Massachusetts the dignity of being the cornerstones upon which the United States was built. I have no doubt that they would have been strongly against same-sex marriage, but what was their view of marriage in general? Quite simply, in Early New England, marriage was not seen to be a sacred rite, but as legal contract, or “civil union,” useful upholding property rights and other civil laws. All Puritan wedding ceremonies were performed not by the clergy, but by civil magistrates. Likewise, the bride and groom did not walk down the aisles of a church, but were hitched in a private home. Similarly, when ministers did begin to conduct the wedding ceremonies, they still were held in private homes, and the minister was granted power to do so by the state alone, and not by the church. So, perhaps we should borrow from our forefathers.

I know these are written with a little sarcasm, but hopefully the points can be useful.

June 27, 2015 Bill Burr and the Prophetic Power of Comedy
Recent Comments
0 | Leave a Comment
Browse Our Archives
Follow Us!