Richard Dawkins Is NOT An Atheist!

Richard Dawkins Is NOT An Atheist! July 15, 2015 Richard Haynes 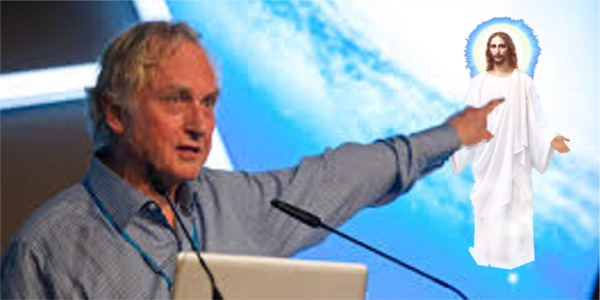 Boy,  he sure had me fooled.

In an argument that just might be more unbelievable than claiming the Earth is only 6,000 years old, Ken Ham declares that Richard Dawkins is not really an atheist. And neither am I. And neither are you.

On his website, Answers in Genesis, Ham has written an article entitled, “Dawkins Doubts.” It begins with this statement:

The media are abuzz with evidence of a rapidly rising number of nonbelievers. But are there any true atheists? Consider the most famous modern atheist, Richard Dawkins.

Using the same horrible argument I wrote about in my review of the movie God’s Not Dead, Ham goes on to declare that there is no such thing as an atheist.

Of course, this argument is nothing new, and it is basically built on these three verses of the Bible:

Romans 1:18-21 – For the wrath of God is revealed from heaven against all ungodliness and unrighteousness of men, who suppress the truth in unrighteousness, 19 because what may be known of God is manifest in them, for God has shown it to them. For since the creation of the world His invisible attributes are clearly seen, being understood by the things that are made, even His eternal power and Godhead, so that they are without excuse, because, although they knew God, they did not glorify Him as God, nor were thankful, but became futile in their thoughts, and their foolish hearts were darkened.

I suspect that not many of you are interested in a Bible study, so I won’t go into too much detail. However, the study of the Hebrew word “fool” used in the Psalms is quite interesting. It is nabal, and it also happens to be the name of a man mentioned in 1 Samuel 25:2-39. Nabal was not mentally handicap, but was so rebellious and obstinate that no one could have a rational conversation with him.

But I digress. Back to Dawkins.

Clearly being ignorant of the true definitions of atheism and agnosticism, Ham uses an appearance on Jon Stewart to prove that Dawkins is not a true atheist. Here’s that exchange:

Jon Stewart: So where do we go when we die?

Stewart: So you don’t know?

Dawkins: Well, we either get buried or cremated. Or we give our bodies to science. Bertrand Russell said…

Stewart: But you actually don’t know what happens to us?

Apparently, this is all the proof Ham needs to substantiate Dawkins’s true belief. So… checkmate?

Furthermore, Dawkins enjoys wallowing in his sin so much, that he is like a cockroach who runs from the light of truth. And the same goes for me, and all of you reading this who happen to not hold a belief in gods. In fact, we “New Atheists” are so active because we also want to continue sinning. Ham says:

Our sin nature is such that we want to be our own god and not submit to the God who created us. Like rebellious little children, professed atheists cover their eyes, and put their hands over their ears, and are really crying out, “No, I refuse to believe. There is no God. I evolved. I determine what my meaning and purpose is. I refuse to believe God’s Word. I will not submit to God.”

Because the evidence within man and all around us in the creation is so strong, these atheists actively and aggressively attack Christianity and promote their atheism in order to “suppress the truth in unrighteousness.”

I’ll close with this clever little comic strip that Ham includes with his article:

Excuse me while I go crawl into my den of sin.

July 17, 2015 Donald Trump Calls Penn Jillette A "Goofball Atheist"
Recent Comments
0 | Leave a Comment
"Marriage can be a religious if you choose it to be. In reality it is ..."
4th and Main Mike Huckabee: Ignoring the Supreme Court ..."
"Huh?"
Jim Jones Why I Am Proud to Be ..."
"The fool says in his heart: I am in the mood for Mexican - let's ..."
a_b704 Richard Dawkins Is NOT An Atheist!
"Yes. All you have to do is observe and document the various behaviors of social ..."
evodevo Original Sin and the Origin of ..."
Browse Our Archives
get the latest from
Nonreligious
Sign up for our newsletter
POPULAR AT PATHEOS Nonreligious
1