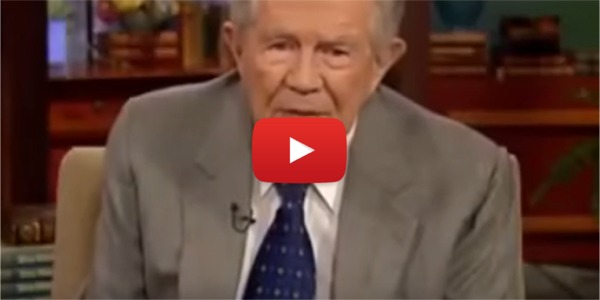 One of the most frequent questions “newer” atheist parents ask me, has to do with proselytizing grandparents. While it is a noble aim to allow your kids to make up their own minds about god(s) and religion, ti is also important to realize that children can be easily influenced by those they love.

For those who come from traditional religions, it may be perfectly fine to allow your kids to attend church with grandma and grandpa. However, this is seldom the case with evangelical families.

I’ll let Pat Robertson set the stage for what I am talking about:

While this video has been making the rounds, it is probably the least crazy of Robertson’s foibles. In fact, I would argue that much like his views on same-sex marriage, his video statements represent the vast majority of evangelicals when it comes to unsaved children. Think about it. When one truly believes in an eternal Hell, it only makes sense to save loved ones from it.

I know this is a very complicated issue, and would take too much of your time to seriously discuss. Nonetheless, suffice it to say that it is essential to establish clear boundaries when it comes to your children. Don’t feel you have to win the debate, and for the sake of peace, perhaps even declare that the subject of religion will not even be discussed. Just make yourself clear.

Believe me, at first there may be much brouhaha. However, eventually the prospect of missing out on the joy of grandchildren, will force compliance with your rules.

August 13, 2015 Renaming Pluto "The Moon of Muhammad"
Recent Comments
0 | Leave a Comment
"Marriage can be a religious if you choose it to be. In reality it is ..."
4th and Main Mike Huckabee: Ignoring the Supreme Court ..."
"Huh?"
Jim E Jones Why I Am Proud to Be ..."
"The fool says in his heart: I am in the mood for Mexican - let's ..."
a_b704 Richard Dawkins Is NOT An Atheist!
"Yes. All you have to do is observe and document the various behaviors of social ..."
evodevo Original Sin and the Origin of ..."
Browse Our Archives
get the latest from
Nonreligious
Sign up for our newsletter
POPULAR AT PATHEOS Nonreligious
1