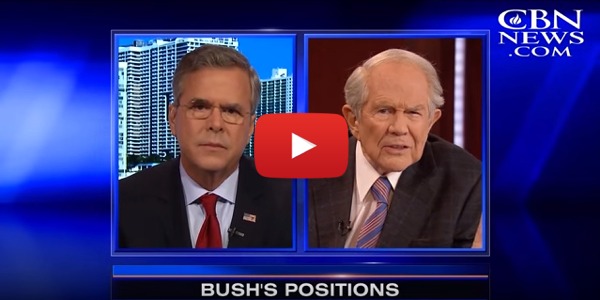 Repeatedly, politicians are asked to justify their associations with certain groups and individuals. So, why has no reporter asked Jeb Bush why he lends credibility to the likes of Pat Robertson? In October, Jeb spoke at Regent University, and earlier this week, he sat down for an interview with Robertson for CBN News. If you’re interested, here’s the video:

Despite his many asinine and ludicrous statements, Robertson remains quite influential in the evangelical community, and I have argued before that the freethinking community is too quick to dismiss him as a loon. Robertson quite often represents the mainstream views of Christianity, and this combined with the fact that his viewers vote, is obviously the reason Bush would appear on his program. Nonetheless, it is time we start asking Bush, and all other politicians, to support or condemn Robertson’s statements.

President Obama was lambasted for his association with Jerimiah Wright, and reporters demanded that he condemn the infamous “God damn America” sermon. However, Robertson has preached the exact same message (only with less colorful language). Have we forgotten that Robertson, along with Jerry Falwell, proclaimed that 9/11 was a result of God’s damnation because of “the pagans, and the abortionists, and the feminists, and the gays and the lesbians,” oh, and the ACLU? Likewise, Robertson said the same thing about Hurricane Katrina.

Join me in haranguing media outlets until they begin asking all politicians to justify their associations with religious figures. This is not a question of religious liberty. Once a politician speaks publically concerning a religious belief, or appears on a religious program, all questions become fair game. As I discussed in my “How Religious Beliefs Can Threaten Progress and Perhaps Our Existence” post, there is a huge difference between supporting someone’s religious freedom, and respecting their said beliefs. This should especially be true when it comes to those seeking the Presidency.

January 4, 2016
Ultrasound Photo Reveals Baby Is Not Alone
Next Post

January 8, 2016 God Burns Down a House to Showcase John 3:16
Recent Comments
0 | Leave a Comment
Browse Our Archives
get the latest from
Nonreligious
Sign up for our newsletter
POPULAR AT PATHEOS Nonreligious
1