Talks at Google: Richard Dawkins and the Best Argument for God 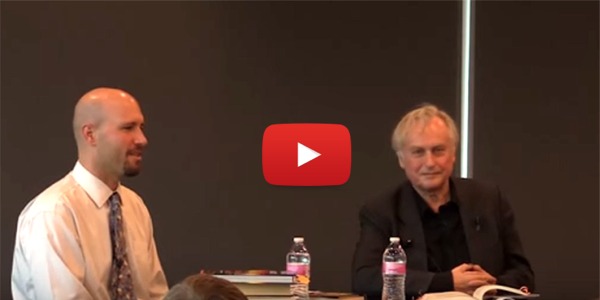 A couple days ago, Talks at Google posted the video of Richard Dawkins’ October visit to Google’s offices in Kirkland, WA to promote his book, Brief Candle in the Dark: My Life in Science. Here it is:

When you have some time, it is definitely worth watching the whole thing.

Also, be prepared for your favorite creationists to begin using one particular part of the video to demonstrate that Dawkins acknowledges the evidence for a Creator. When asked for the best argument against evolution, Dawkins referred to the apparent “fine tuning of the universe.”

Even though the Christian Post acknowledges it, you probably won’t hear the evolution deniers mention that Dawkins prefaces his answer by stating that he is not:

In any sense admitting that there is a good argument … there is no decent argument for the existence of deities.

Finally, it should be pointed out that Dawkins limited his answer to a “deistic god.” Even if there ends up being some creator of the universe out there, there’s no reason to believe that it is linked to any of the thousands of gods believed in throughout the world. Talking snakes, talking donkeys, virgin births, and resurrections require an entirely different level of evidence.

January 11, 2016
Original Sin and the Origin of Morality
Next Post

January 15, 2016 Atheism: Be Equipped to Clarify the Confusion
Recent Comments
0 | Leave a Comment
"Marriage can be a religious if you choose it to be. In reality it is ..."
4th and Main Mike Huckabee: Ignoring the Supreme Court ..."
"Huh?"
Jim E Jones Why I Am Proud to Be ..."
"The fool says in his heart: I am in the mood for Mexican - let's ..."
a_b704 Richard Dawkins Is NOT An Atheist!
"Yes. All you have to do is observe and document the various behaviors of social ..."
evodevo Original Sin and the Origin of ..."
Browse Our Archives
get the latest from
Nonreligious
Sign up for our newsletter
POPULAR AT PATHEOS Nonreligious
1