Woman Claims She Was Raped by a Pokemon Monster

I don’t know why, but I am fascinated with the crazies and their Pokémon adventures. This is why I wrote about Satan training at the Westboro Baptist Church, Ken Ham claiming Pokémon were evidence for creationism, and the radio preacher saying the Devil uses Pokémon to target church leaders. Hell, I even got a little more somber when I accused a pastor of child abuse for casting Pokémon demons out of children.

Now, the Daily Mail is reporting that a Moscow woman claims a Pokémon raped her. The woman stated she played Pokémon Go before going to bed and woke up to find a gigantic Pokémon lying on top of her doing the naughty.

The woman jumped out of her bed, and the monster disappeared. However, when she logged into the game, it said it was still there. She woke up her husband to tell him what happened. For some reason, he did not believe her.

The woman’s friend had this to say:

She says there are too many Pokémon at her place, and even the dog can sense them. She says the dog barks whenever she plays Pokémon GO.

Also, for some reason, the police did not believe the woman either. They told her to get psychiatric help.

While mental illness is nothing to take lightly, what’s the difference between this woman and some of those people I referred to in the opening paragraph? They all believe that Pokémon creatures represent real entities. Why does our society give a pass to those who spout insanity in the name of “faith”? 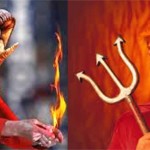 August 11, 2016
What does the Bible and Nostradamus say about Donald Trump, Hillary Clinton, and Vladimir Putin?
Next Post

A Christian no more. Musician Jonathan...
The Freethinker
Related posts from Brother Richard's Life Without Faith