Today is National Coming Out Day, a day for gays to come out of the closet and so just as we did last year, here at Camels With Hammers we will be supporting gays and lesbians the world wide by featuring mostly content related to gay issues.

People ask me often why I write so much about gay issues, some who are close enough to me have the temerity to ask me if my passion on behalf of gays means I am gay (it doesn’t, I’m quite incorrigibly straight, single, and looking, ladies).  I find the question a bit dispiriting and I worry that it is precisely the fear of being thought gay that may cause other straight people to hesitate in their support for gay rights.   About as often as someone prefaces or follows a racist remark with the hopelessly inadequate disclaimer that he or she is not a racist, I hear straight people preface their support for a gay person or for gay rights with the opposite assurance (in case anyone’s worried), “even though I’m straight…”

And understandable as this is, it’s depressing.  What it says to me is that  even among those of us straights who want to support gays, there’s a stigma, we don’t want and that’s to be confused, for even a second for being gay and this could only mean that for every gesture of support a straight person was willing to give vocally, there might be much more support inside that could not get out for fear that it be misconstrued as a sign of homosexuality.  And wandering the internet before starting Camels With Hammers, I never came across a blog run entirely by straight people that forefronted gay issues and I wanted Camels With Hammers to be that kind of place.

But why?  Why make my blog so much about gays?  There are a number of reasons but in this post, I’ll just cover one.

As amazing and invaluable as the “It Gets Better” series is for getting the word out to teenage gays that other gays have grown up to live happy lives, our gay friends and the many gays who are strangers to us need us straight people to be unabashedly welcoming and show unflinching solidarity with them.  Gay people, teenage and otherwise, need to know that not only can gay life get better but straight people can get better.  Straight people can cross the lines from intolerance to tolerance to acceptance to full embrace.

Other atheists have gotten this.  Some of them have explicitly apologized to the whole gay community for their homophobia during their religious days.  And while I cannot talk in any depth about this subject because it would risk the privacy of closeted friends, let me say that I too am deeply ashamed of my unbelievably hurtful and emotionally reckless clumsiness with gay friends’ feelings when I was a Christian trying sincerely to “love the sinner and hate the sin”.  The most decisive factor in my leaving Christianity was the realization that beliefs have consequences and that it was profoundly immoral to base a moral code on a belief system that was not only unsupported by rational evidence but thoroughly counter-indicated by such evidence.  I realized that my beliefs were not merely personally edifying but that they had the potential to be truly poisonous and life threatening to other people, even despite my best intentions with them and my sincerest love for my friends and attempts to love them.

There are just no two ways about this, my Christian friends.  Either you wholeheartedly embrace your gay friends and encourage them to know love to the very fullest just as you would encourage any one else to and wholeheartedly oppose the denigration of their love found in your Scriptures, or you are fucking with their minds and hearts with your rationally indefensible attempts to “help” them find some other way to be happy.  Please, please, please follow my example, and knock it off.

And while you’re at it, do as I did and examine the ways that your unfounded beliefs lead you to such divisive, outmoded beliefs about morality which do not correspond to the reality of what is natural and good and life-enhancing for your gay friends who you sincerely do care about.

What we believe leads to what we think, what we say, and what we do.  Believing without sufficient evidence or believing things which are refuted by evidence, leads us to think, say, and act on morally unjustified bases just as much as on intellectually unjustified ones.  Yes, in various areas of life, religiously articulated morals are often nonetheless defensible (and probably in actually implicitly based) on rational grounds.  But a good action done from a false reason is to some extent only luckily good.  And we see it depressingly often how easy it is for religious people, from the same desire to please God, to do wicked actions and advocate wicked ideas with perfectly untroubled consciences and, worse, with an unflappable sense of personal righteousness and intellectual authority which lacks all self-doubt or introspection.  If you cannot see this in your own religion, just look to one you don’t believe in, that always does the trick to make the point clear.  Now, let me in on a secret, people in your religion and you yourself when you oppose homosexuality do the same thing.

The unwittingly cruelest, most thoughtless things I’ve ever thought or done or said were rooted in baseless religious beliefs which I held to so tenaciously for what I ultimately realized were socially, emotionally, and irrationally inculcated and which could never be adequately improved from those non-rational bases, despite years of devoted effort to make them make sense intellectually.

After 9 long years from 12-21, spent trying to rationalize my faith and convert every friend I had to it, I came to realize that not only was it a futile endeavor to set irrational beliefs on a firm rational footing but that these beliefs were not benign, that no false beliefs can ever be wholly free of serious risks since incorrect ideas about the world inherently, by their nature, mislead about the world and so mislead actions in the world.

Taking it on faith that the best thing gays can do is be either celibate (as the conservative Catholics think) or “straightened out” (as the Evangelicals typically think) has carelessly inflicted devastating affects on more gay people than we can ever count—both when they hold these self-destructive beliefs themselves and when they suffer alienation and discrimination as a result of others holding these beliefs and treating them based on them.

There is only one moral option and that is to make it as normal as possible for gays to be who they are, as they are, as successfully as possible.  And that’s not special treatment or the accommodation of a “sick” or “confused” or “depraved” group of people—it’s the same goddamn that is the only moral option for any of us. Our good is to flourish as much as we can in our powers—intellectual, physical, emotional, sexual, spiritual, psychological, technological, artistic, aesthetic, athletic, and all other specifiable powers through which we can fulfill our natures as human beings in such a way as to also empower other humans maximally as possible to grow in their powers as well.

No social structure or institutions which demand the systematic maiming of an entire subset of the population’s intellectual, physical, emotional, sexual, spiritual, psychological, technological, artistic, aesthetic, athletic, or other specifiable powers is in anyone’s interests.  No one, straight or gay, benefits from gays having their loves marginalized or their sexual side inhumanly deprived.  No one—male or female–gay, trans, or straight–benefits from having suffocatingly narrow gender norms that make people needlessly loathe themselves for their unavoidable personalities, their exceptional talents, or the kinds of genitals they have or don’t have.

There is much, much more to say about why I want to unambiguously stand in solidarity with the gay community, but that should suffice for one post.  The rest of the site, including especially, last year’s post celebrating National Coming Out Day, should offer plenty more insight into why support not only gay rights but the affirmation of homosexual lives as ethically preferable and positively promotable for all those so naturally inclined.

In the meantime, I leave you all with the following exhortations for the day:

To all you who are closeted, if you can get out of the closet safely and feel ready to openly be yourself–either to the whole world or to select people you can trust–I just want to say thank you for your courage.  It is unbelievably important what you are doing for, not only yourself but for your friends and family, for your enemies, for your wider community of gays and lesbians who your bold stand will help out.  And every straight person should reflect on the courage of the gays we know like you who are role models of willingness to assert oneself in one’s individuality regardless of the pressures of countless conformity enforcers throughout the society.

To all you who are struggling with whether to openly and unqualifiedly embrace your gay friends with no religious or moral hesitation, it’s time for you to come out of the closet too—as a compassionate and rational human being, capable of burying your own insecurities about your own sexuality or overcoming your own need to cling to a false assurance that the Bible, as written, is a perfect guide to morality or a god’s will.

To all you who are allies, be so outspoken on behalf of the full moral equality of gays and lesbians that people who can’t imagine passionately supporting a group of people to which they don’t belong conclude that you just must be gay yourself.

Nonreligious
Before and After I Deconverted: The Development of...
Camels With Hammers

Republicans Exhibit Pathetic Behaviour over Witnesses
There is absolutely no doubt that the impeachment of Donald Trump is... 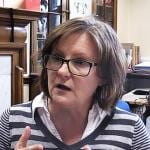 Pull the Rope
Elections are like tug-of-war: the only way to win is to take...
view all Nonreligious blogs
What Are Your Thoughts?leave a comment
Copyright 2008-2017, Patheos. All rights reserved.