Wow! I Belonged To The TRUE Christian Church!!

From ages 5-21, my entire time as part of the Protestant Christian Church, I was more specifically a member of the “non-denominational” Church of Christ which arose out of the “Restoration Movement” of America’s 2nd Great Awakening.  John W. Loftus, a former minister and fellow former member of the Church of Christ turned atheist, has a chart (reproduced below) which breaks down all the major Christian denominations and sub-denominations, exposes their heretical doctrines and how they fulfill prophecies of Revelation, and finally how only Christians from our branch of churches, Restoration Movement churches, go to heaven!

Loftus also butters me up completely with a great quote from Nietzsche’s Daybreak (section 91) about how ridiculous it would be for God to make Himself so hard to find and make mistakes about figuring out the truth about Him carry the consequence of hell.  Normally such an argument (and from Nietzsche no less) would persuade me of the irrationality of religious belief.  But, now that I learn I had the true Christianity all along, I do not think this is such a big deal.  I was baptized in the Church of Christ—I’m going to heaven!!!  And you’re not! Suckersssss! 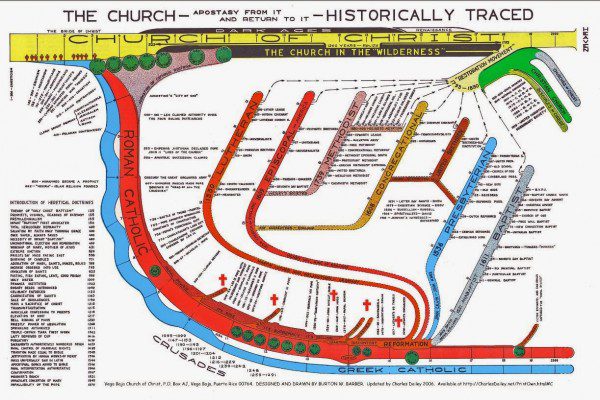 February 9, 2011 Republican Legislator In Wyoming Recounts Circumstances Of Her Abortion
Recent Comments
0 | Leave a Comment
Browse Our Archives
get the latest from
Nonreligious
Sign up for our newsletter
POPULAR AT PATHEOS Nonreligious
1

Nicholas J. Ellingford Shoots His Own...
Laughing in Disbelief
Related posts from Camels With Hammers