In response to my earlier post praising the young Christian man in the video above, who reached out with love to what he thought was a lesbian couple being berated by a cruel and judgmental waitress, Justin writes:

Not to point out the obvious, but homosexuality is a sin,

You have indeed not pointed out anything obvious.  Homosexuality is not at all obviously a sin.  Disregarding the question of whether there are such things as “sins” at all, it is implausible that homosexuality is immoral.  Homosexual love does not of itself violate anyone’s autonomy, harm anyone, or interfere with the development of moral virtues.

Assuming, for argument’s sake, that there were a personal God who was an omnipotent, omnibenevolent, morally perfect creator of all of nature, including humanity, as Christians believe, it would be absurd to believe that such a being would call “sinful” anything that was not also discoverable according to reason to be morally wrong.  Just as a morally perfect God could not give humans the standard physiology we have and then sensibly call starving to death good for us, neither could such a God create in a small but significant portion of us a sexual orientation towards members of the same sex and recommend either total sexual and romantic abstinence or that these people get their sexual and romantic fulfillment from those they are not oriented towards naturally. If this argument is unclear, I recommend you read this, this, this, and/or this, wherein I develop these arguments in greater detail.

and Jesus would not condone it.

Jesus never condemned it, so how are you so sure he would not condone it?

Appeals to Jesus are actually superfluous in determining what is right and wrong.  All that matters is what is true on the matter.  Jesus, as given to us in the canonical Gospels—whether or not he ever existed at all, or is accurately represented in the Bible if he did exist—is sometimes right and sometimes wrong.

But what is ethically interesting and valuable about Jesus, whether as a fictional character or historical figure around which myths have emerged, is that he represents a moralist who despised legalists and preferred the company of the overly-maligned. What Jesus seemed to understand when he said, “Judge not, lest ye be judged” was that since no one is perfect, routine forgiveness has to be a part of our moral lives, even as we uphold moral principles in the abstract. 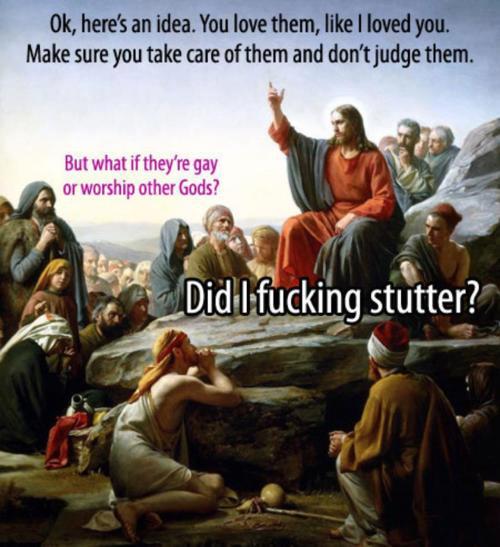 The valuable truth that I think Jesus articulates in such passages is that the social order could not sustain all of us being thoroughly punished for our every wrong.  None of us would wind up happier since even though we would be able to vent our punishment against those by whom we feel wronged, we would also be suffering punishment in return and that would not be worth it to us.

Of course, we cannot let everything slide, some people’s immoral actions reach a quantity or have a quality that makes them unendurable.  But wherever possible, a spirit of “not-judging” seeks to understand each individual on her own terms before condemning her. Sometimes this means understanding the confluence of circumstances that led her to the bad place she wound up, and being able to grasp, in light of that information, how someone could wind up on the wrong path despite benign intentions.  In this way, even when we see someone doing something objectively wrong, we can still have room for compassion for her for becoming confused or objectively weak, rather than mistakenly feel anger for her for being malevolent when in fact she is not.  In those cases you might still judge the actions less than ideal but you can refrain from judging the person incorrigibly bad.

Other times “not-judging” means not assuming you have all the information about what someone else is actually doing and why.  What might look flat out wrong from your own uninformed perspective might actually be right if you understood more about all the factors involved.  None of us knows all the facts or feelings that make up another person’s life and so even though we can make generally true, abstract moral conclusions about what is usually correct to do or not to do, we cannot blithely assume we know all the relevant factors in some given person’s situation to be sure without careful investigation that in fact they have done the wrong thing and there are no mitigating or justifying factors obscured from our view.

The waitress was completely out of line, of course. And there’s no call for being tactless and hateful. But that doesn’t mean we as Christians should advocate sinful behavior.

What you should advocate if you want to retain the morally interesting and valuable part of the Jesus story is a willingness to save morality from the legalistic Pharisees who fetishize and ossify existing laws for their own sake rather than reinvestigate how received laws and their enforcement actually contribute to, or hinder, a good human life. When Jesus says that man was not made for the Sabbath but the Sabbath was made for man (Mark 2:27), the truth he articulates is that any good moral principle is justified only insofar as it contributes to good human lives.  Taking a day off is good for humans, so the Sabbath was created.  If, however, violating one of the Sabbath restrictions is better for humans (on one or all occasions) then by all means break the Sabbath.

Whatever genuine value the ancient Hebrews’ moral, legal, social, ritual, and dietary codes had was in their ability to enhance the flourishing of the Hebrew people and humanity in general.  But, on the other hand, to whatever extent those codes failed to lead to human flourishing, and to whatever extent adopting them today would impede human flourishing, they were (and/or are) dangerous and should have been (and/or should today) be ignored.

Times and circumstances change.  Our understanding of nature has vastly improved and our civilization has advanced morally in a number of ways.  It is a dangerous foolishness that wants to ignore millennia of progress and say “man was made for the law”, and yet that is precisely what happens when fundamentalists say “homosexuals must be celibate or convince themselves they are straight because the laws of the ancient Hebrews are eternally inviolable”.

Contemporary fundamentalist, evangelical Christians are Pharisees through and through.  Had Jesus been one of them, he would have never been Jesus.  Jesus, whether real or not, is one of our culture’s symbols of moral reformation and moral reformers always are those who look evil to the protectors of the moral status quo.  One cannot question the dominant morality of one’s time without, ipso facto appearing to be immoral for insubordinately questioning what is assumed to be morality itself.  You cannot promote what is wrongly called immoral without promoting what most people think of as immoral.  And you cannot call bad moral laws immoral without, to conventional ears, calling morality itself immoral.

To be like Jesus in his most admirable respect would be to side with a wiser understanding of morality against immoral conventions that are taken to be morality itself. It is to be what Nietzsche calls “an immoralist“.  The regressive, fundamentalist, legalistic Christians who want to stop any and all moral rethinking and instead pretend that their own moral codes just were handed to them from God in the Bible from the beginning (even where this is laughably obviously false) are precisely the people who would have never had a mind opened to accept what Jesus was doing.

This is the sense in which I think the Christians who open up to gays are more Jesus-like.  Insofar as Jesus was also a cult leader who encouraged his own deification and had his own very nasty authoritarian streaks, the regressive fundamentalist Christians are indeed his true followers too.  But that is so much the worse for Jesus and not to those Christians’ credit or vindication at all.

Tolerance means being egalitarian towards people, not ideas.

Those people that spoke up were being judgmental of that woman, weren’t they?

They morally correctly judged her.  That’s different than being “judgmental”, which is a vice of judging people prejudicially.  The judgmental person regularly judges without full knowledge of (or proper compassion for) others’ circumstances, such that she judges wrongdoers too harshly and some good doers incorrectly as wrongdoers.   The people in the restaurant who spoke out against the waitress were correct to assess the situation as they did and to reject her behavior, given all the relevant factors.

Saying “don’t judge” is self-refuting. You’re telling someone that they ought to live in a certain fashion. Judgment is not the problem, but PROPER judgment.

Saying “don’t judge” is appealing to a general principle.  If you reject that principle, then you have to reject Jesus too since he said, explicitly, in Matthew 7:1, “do not judge lest ye be judged”.  So either you think Jesus is self-refuting or you understand that he is referring to a principle and that principles are not absolute but must always be tempered with other principles.  Since you apparently consider yourself a Christian, I would imagine you would have to take the latter option.

But, yes, I agree that judgment itself is not inherently wrong.  It is improper judgment that is culpable.  I think that your judgment of homosexuality as sinful shows poor moral judgment for reasons I have already alluded to.

Homosexuality is a sin, plain and simple.

No, it’s not.  That’s not plain and it’s not simple.  There are many complexities you ignore when you say something like that.

We are to love and pray for homosexuals just like anyone else. But don’t be so foolish as to accept their behavior as “alternate lifestyle”.

It’s more than just an “alternative lifestyle”—it’s the healthiest option for gay people’s flourishing.  It’s a psychological, sexual, and ethical necessity for them.  Do not be so foolish as to dogmatically impose the brutal and ignorant judgments of ancient nomadic desert peoples on modern people to their unnecessary detriment.

July 6, 2011 Asking Richard Wade About How Atheists Should Confront And Replace Religions
Recent Comments
0 | Leave a Comment
Browse Our Archives
get the latest from
Nonreligious
Sign up for our newsletter
POPULAR AT PATHEOS Nonreligious
1

How Ravi Zacharias Got Away With...
Roll to Disbelieve
Related posts from Camels With Hammers