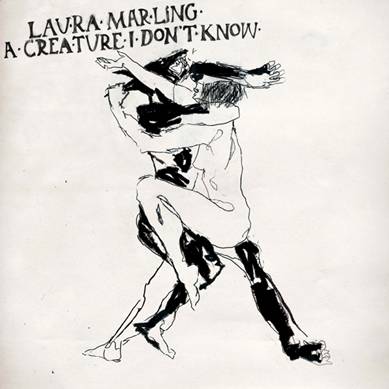 , recorded when she was only 17, is a masterpiece which instantly made her my favorite female folk singer bar none. If Bob Dylan’s 1960s work did not exist she’d be my favorite folk singer, period. Her exceptional follow up I Speak Because I Can

only added textures and nuances to my admiration, as did my opportunity to see her at Le Poisson Rouge in February 2010. Now her new album A Creature I Don’t Know

is coming September 13 and it is, predictably, spectacular. And you can stream it at The New York Times Magazine for the next week. I already have my ticket to see her show at Webster Hall on September 28. Any others going are welcome to arrange to join me there.

Below the fold are a taste of the article which accompanies the stream of the new album and just a couple from among numerous wonderful songs you can watch videos for on YouTube. Her official YouTube page is lauramarling.

Only a year and a half after the release of the superb “I Speak Because I Can” Ms. Marling has gone deeper, making her arrangements more volatile as her songs grow bolder. Much of the music still revolves around her lustrous voice and her acoustic guitar, flanked by cello and banjo. One new song, “Night After Night,” is a chilling waltz she sang and played solo in the studio after the band had left; it quietly announces, “Dear lover forgiven/My love is driven by rage.”

Her producer, Ethan Johns, said, “By the end of the take I was almost in tears.”

Other songs on the album, even those that start quietly, embrace sudden transformations and the jolt of electric guitars. “The album is like a slap and a stroke,” Ms. Marling said. “It’s done the thing it wanted to.”

Her newest video is for the song “Sophia”:

is “Don’t Ask Me Why”, which I’ve been listening to for a year since this performance on WNYC:

For those who would like to hear a song wherein she takes a swipe at the Christian God, there is the utterly beautiful “Failure” from Alas I Cannot Swim

And just one of many highlights from I Speak Because I Can is “No Hope in the Air”:

And while her first album is packed with masterpieces from which it is hard to pick a favorite, “Ghosts” has especially deep resonance for me and its video is amazing:

Finally, I geeked out two summers ago and embedded in a single post 70 minutes of choice videos of Laura’s songs and live performances, almost all of which available at that point were from her first album (but some of which were rare or would eventually wind up on the second album).

September 4, 2011 The Simpsons, Family Guy, and The Trolley Problem
Recent Comments
0 | Leave a Comment
Browse Our Archives
Follow Us!