Both Refute The Best Counter-Arguments YOU Can Think Up And Create Gestalt Shifts (Tip 8 of 10 For Reaching Out To Religious Believers) October 9, 2011 Daniel Fincke

Top Ten Tips For Reaching Out To Religious Believers

8. Both Refute The Best Counter-Arguments You Can Think Of And Create Gestalt Shifts.

I love the “Zombie Jesus” meme. I love the way it highlights the ludicrous fantasy of the idea of a man raised from the dead. It forces the mind to realize that formally the “risen Christ” which is taken to be an entirely plausible concept, looks little different from the brain-eating undead monsters which in our culture are universally taken to be sheer fiction. 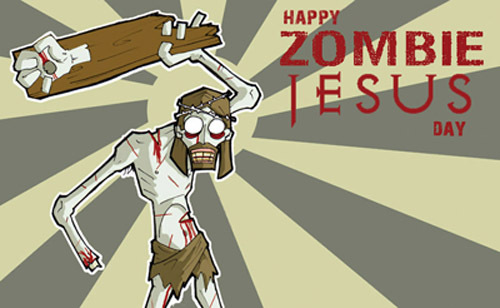 Religious doctrines, stories, and values are so deeply embedded culturally that they become as unthinking as cliches. The shock most people would feel when hearing tales of genocide for many is astoundingly absent when they read mass indiscriminate ethnic slaughter celebrated in the Old Testament. When reading their religious texts religious people obligingly suspend their normal suspicion of fantastic tales, or of the wisdom, spirituality, morality and general reliability of those who tell them.

So, it is really valuable to create a gestalt switch wherein you can jolt people into seeing that what they like to conceive of in whitewashed, watered-down, harmless ways are really morally grotesque or obviously and ridiculously false when framed in ways that are more consistent with the rest of our 21st Century values and which give no special exemption to religious texts from the normal 21st Century rules for being morally and historically acceptable as a source of guidance or truth.

But gestalt shifts cannot be all of what we do. I read many atheists whose caricatures of religious beliefs are so reductive that I can imagine hardly any religious people recognizing their own views at all in the straw man. I addressed this a bit already in tip #3 about not telling religious people what they “really” think but engaging them on their actual, idiosyncratic views.

Now I want to add to this a call to specifically figure out the best possible cases for their views and target them. Even where believers themselves are so ignorant or incoherent that they cannot present their religions’ positions with any rigor or plausibility, we should be willing and able to engage the best possible arguments. So, sometimes this means we might have to provide them ourselves. This is because even though the believer may not know how to formulate a better articulation of his beliefs than our gestalt-shifting offering of what they entail, he will usually be unwilling to take a caricature as a decisive refutation of his positions.

But if we reach out and work with him and help him think through the best possible defenses of his position, we get his hopes up that maybe he can salvage his views and we impress him with how thoroughly we are able to think through his own position even though we do not accept it. When we can help him build a seemingly impressive defense for his own views and then take that apart, we demonstrate in a powerful way that we are not just attacking his views out of ignorance or shallow understanding. We show instead that we understand his position better than he does and still can systematically dismantle it because it is so weak. This is very psychologically powerful and has the benefit of being fair, gracious, and a model of ideal rationality. We should do this simply as an expression of our commitment to rationalism and our love of truth, even were it not so useful for persuasion.

If all we ever do is cast their views in ways that do not really capture the essence of what they really mean, believers can reflexively dismiss us as unserious or uncomprehending. When we show that we can engage the most sophisticated versions of their views and show that we can explore a dozen of the most seemingly promising avenues to cogently develop their own positions for them or with them, and yet still refute them point by point, we limit their ability to feel like they have rational options left we have not touched.

9. Be Unapologetic, Rigorous, Patient, And Gracious With Religious Believers.

Clarifications to the Tips, Based on Objections:

I Am A Rationalist, Not A Tribalist.

I Don’t Really Give A Fuck About Tone, Per Se