Shannon Burgdorf points us to the website of The Rock, a South Carolinian church, where they were using this tasteless image to promote themselves: 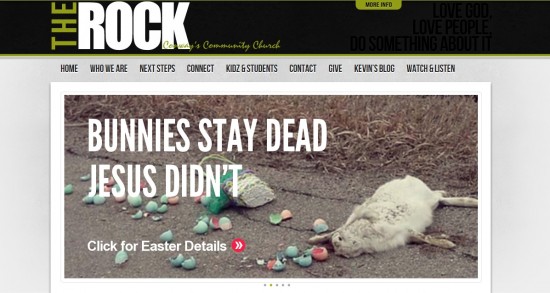 What’s so wrong with this? As Terry Munger puts it on my Facebook page, “It is such a huge problem to treat animals as commodities rather than as living creatures that have been brought into someone’s life and home. It’s not ethical or acceptable to promote a message like this in order to spread dogma, period.” And Adrian Allen writes, “More than tasteless. Just shows that some of them are so obsessed that they have no respect for anything but Jebus.”

Prompted by atheist disgust and contempt, Kevin Childs, the church’s pastor, gave an apology which missed half of the point and managed to unwittingly insult atheists specifically while he was at it:

The question I have faced the most has been this: “Any regrets?  Would you do it again?” And I have quickly responded with “YES!”

Now, frankly, I’m not so sure. Not because I don’t believe in the message we wanted to send out. Not because our motives were wrong. And not because I’m shrinking or caving in because of harsh criticism. But if MUCH of the criticism is coming from the very people my own heart longs to reach, THAT stops me in my tracks. I could pretend otherwise. I could stick my jaw out, think up some zinger come-backs, and pretend I’m “earnestly contending for the faith.”

Listen, if fussy over-churched little Pharisees slam us, I honestly could not care less. If their unbelieving neighbors say that we’ve pushed them FURTHER from faith, that will keep me up at night. If our attempt at edgy irreverent outreach cast our church and Christianity in a bad light, blame me. Just me. And I apologize. If you actually did have a small child get traumatized by what you received in the mail from us, please believe that was absolutely not our intent, and I personally apologize for that too.

Apparently, Childs is surprised and disappointed at the criticisms he’s getting, not from his congregation (whom he dismisses, strangely, as “fussy over-churched little Pharisees” — seriously, this guy’s on douche overload), but from atheists.

So, Kevin, what you’re saying is that you really intended your card as an outreach to atheists? Because somewhere in that cracked clay pot you call a brain pan, you got the idea that we’re such disgraceful, immature, heartless and morally bankrupt people that we would look at an image making a joke of animal cruelty and totally go “LOL! Dude, I used to think religion was bullshit. But this church looks like the fucking bomb! Look at that little bunny’s guts! LMAO! I gotta go to this church now. Maybe if I get lucky the pastor will sodomize a couple of kids and put a kitten in a microwave!”

Look, dude. You want to reach out to us? Fine. Here’s a protip. We like things likearguments, and evidence, and discussion, and rational discourse. We’re not a bunch of overgrown frat boys lighting farts and doing our best to extend our arrested adolescence into our fifties. (Can you actually light a fart, by the way?)

I admit, the last part is where Martin’s atheism does make him ignorant. Had he grown up in youth group like I did he would have learned that you can actually light a fart. Not that I had any interest in learning this myself. But it was demonstrated to me several times at a Christian youth conference.