The standard map of the United States electorate colors every state by which party its electoral votes for President went to. Since there are a number of states with low population density that vote consistently Republican, electoral maps year after year seem to fill in a bigger proportion of the map in Republican red than would reflect the actual right wing lean of the overall country. County maps of the country’s voters make the nation look even redder. So, there a number of illuminating solutions that map makers try. Some expand or shrink state sizes to reflect their population density. Others introduce shades from blue through purple to red to reflect the relative degree of Republican lean, Democrat lean or lack of lean in each place.

Chris Howard’s map below, takes the most fascinating and seemingly accurate approach I have seen yet, applying colors based on both population density and partisan lean: 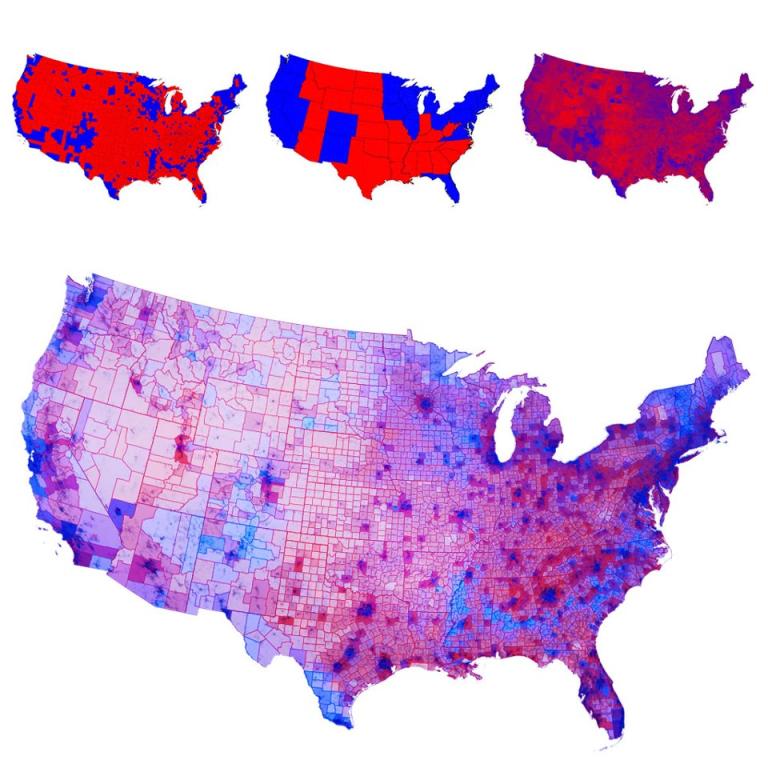 Get the full size map on Howard’s Facebook page. There he also explains how he made it and what it how to read it:

America really looks like this – I was looking at the amazing 2012 election maps created by Mark Newman (Department of Physics and Center for the Study of Complex Systems, University of Michigan, http://www-personal.umich.edu/~mejn/election/2012), and although there is a very interesting blended voting map (Most of the country is some shade of purple, a varied blend of Democrat blue and Republican red) what I really wanted was this blended map with a population density overlay. Because what really stands out is how red the nation seems to be when you do not take the voting population into account; when you do so many of those vast red mid-west blocks fade into pale pink and lavender (very low population).

So I created a new map using Mark’s blended voting map based on the actual numbers of votes for each party overlaid with population maps from Texas Tech University and other sources.

November 12, 2012
How To Make The Soft Sell To Christians
Next Post