The world is so big, so complicated, so replete with marvels and surprises that it takes years for most people to begin to notice that it is, also, irretrievably broken. We call this period of research “childhood.”

There follows a program of renewed inquiry, often involuntary, into the nature and effects of mortality, entropy, heartbreak, violence, failure, cowardice, duplicity, cruelty, and grief; the researcher learns their histories, and their bitter lessons, by heart. Along the way, he or she discovers that the world has been broken for as long as anyone can remember, and struggles to reconcile this fact with the ache of cosmic nostalgia that arises, from time to time, in the researcher’s heart: an intimation of vanished glory, of lost wholeness, a memory of the world unbroken. We call the moment at which this ache first arises “adolescence.” The feeling haunts people all their lives.

Everyone, sooner or later, gets a thorough schooling in brokenness. The question becomes: What to do with the pieces? Some people hunker down atop the local pile of ruins and make do, Bedouin tending their goats in the shade of shattered giants. Others set about breaking what remains of the world into bits ever smaller and more jagged, kicking through the rubble like kids running through piles of leaves. And some people, passing among the scattered pieces of that great overturned jigsaw puzzle, start to pick up a piece here, a piece there, with a vague yet irresistible notion that perhaps something might be done about putting the thing back together again.

The opening paragraph struck me as great. But then I remembered acclaimed children’s writer Maurice Sendak’s completely opposite take on childhood:

My friend lost his wife recently, and right at the funeral his little girl said, “Why don’t you marry Miss So-and-so?” He lookeat her as if she were a witch! …But she was just being a real kid, with desperate day-to-day needs that had to be met no matter what.

People say, “Oh, Mr. Sendak. I wish I were in touch with my childhood self, like you!”

As if it were all quaint and succulent, like Peter Pan.

Childhood is cannibals and psychotics vomiting in your mouth! I say, “You are in touch lady–you’re mean to your kids, you treat your husband like shit, you lie, you’re selfish… That is your childhood self!”

In reality, childhood is deep and rich. It’s vital, mysterious, and profound. I remember my own childhood vividly. I knew terrible things…But I knew I mustn’t let adults know what I knew…

It would scare them.

Maybe we shouldn’t talk about “childhood” in essentialistic terms anymore than we should talk about “womanhood” or “manhood” that way. Despite the charming appeal of Chabon’s and Sendak’s mythologies and exaggerations, not all children have the similar enough childhoods at all for tidy narratives of “Childhood” to be terribly helpful.

For the curious, I discussed my own childhood in these posts:

My Experiences of Bullying, Growing up as a Weakling and a Physical Coward 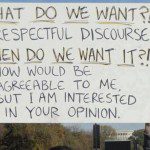 February 13, 2013 The Camels With Hammers Civility Pledge
Recent Comments
0 | Leave a Comment
Browse Our Archives
get the latest from
Nonreligious
Sign up for our newsletter
POPULAR AT PATHEOS Nonreligious
1

Nonreligious
Depression: Pedaling With The Brakes On
Camels With Hammers

Nonreligious
What to Make of our Natural Dispositions to...
Camels With Hammers

Nonreligious
Mutual Kindness As The Key To A Successful...
Camels With Hammers

Nonreligious
The Smarter You Are, The More Trusting You...
Camels With Hammers
TRENDING AT PATHEOS Nonreligious