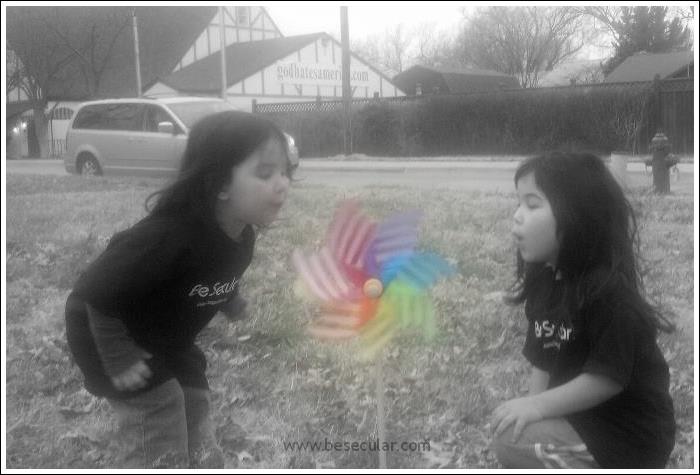 Shanon Nebo has graciously given me permission to repost (below) a terrific piece she wrote originally for the Be Secular blog and which is now on her new blog, Secular Sunshine.

If you are an atheist, then you’ve most certainly heard this uttered in one way or another. And if you are a Christian or a Muslim, then you’ve heard or read this put in terms of consequences for “sinful” actions or thoughts, only one of these being disbelief.

Hell (or Jahannam), as it is described in the Bible and in the Qu’ran is pretty serious. In both versions, your entire life is scrutinized, and upon being less than worthy, you are cast into some pit involving fire. I’ve burned my fingers on hot dishes and I’ve been splattered countless times by hot grease, and I know from experience that hot things can be pretty painful, so I can only assume that the sensation of being burned over your entire body, for a longer period of time than I can fathom, would be indescribably miserable. There are many more descriptions of that, but I am pretty sure that the purpose is to lay out the worst possible situation, create a fear response, and then use that fear to keep the sheep from wandering too far astray.

Many people believe that Hell is real, and when they find out that your thoughts and ideas have you on a fast track to the absolute worst thing ever, some of them want to save you. I have to admire their effort and their good intentions, so when people try to talk to me, I choose not to be rude or blunt, but merely conversational. I used to be a believer, and I know how they feel. I’m an adult, and I can conduct myself responsibly, even when I disagree with the person in front of me.

But what about children?

Let’s think about that one for a minute. Some kids can hack it. Some kids are master negotiators at the age of five, but some of them aren’t. Even the best of them still have yet-developing child brains that tend to soak up everything around them, for better or worse. So, a well-indoctrinated child has very few, if any, doubts that what they have been learning might not be true, or even that it might be oppressive. And these well-indoctrinated children are playing with other kids. Some of them might also be children raised with a religious consideration, but some of them might not. So what do you do when those kids tell yours that they are going to hell?

When my nine-year-old son came home and told me that his friends told him that he was going to hell, he wasn’t upset, so much as concerned and confused. These kids are good and they mean well, but they’ve been brought up in religious households. They have invited my son to church several times, telling him that he gets candy and cookies for reading Bible verses, and he has declined them every time. My son’s nickname is “The Cookie Accountant,” so don’t mistake his motivations. My husband and I even told him that he was free to go, if he wanted to, even if it was just to spend time with his friends and indulge in a few treats. Still, he declined. He said that he just really didn’t want to go, and we told him that was okay.

It wasn’t easy for him to come out to his friends, and it was something that he had been agonizing over because he was afraid that they wouldn’t want to play with him anymore if they knew that he didn’t believe as they did. He asked my husband and I for advice, and we told him that he could come out and take his chances, even though we believed that it would be fine, or that he could avoid that line of questioning, or that he could even blame us, if he wanted to, and say that we didn’t want him going to church. We tried to make it his decision, and we didn’t want to force something that should come from him, and not from parental pressure.

Upon coming out to his friends, they accepted it easily enough, but then said, “Well, you are going to become a Christian eventually, right?” This question stuck in my mind when my son told me about the encounter. He asked them why they thought he was going to become a Christian, and that is when they said it. “If you don’t become a Christian, then you are going to…you know,” with index fingers pointing ominously downward. Our son knows what hell is, and he has a basic grasp of the Christian dogma, but this concerned him. I do believe that it would give anyone at least a moment’s pause, if someone they cared about declared that something bad would happen to them.

Of course, when I heard about this, the first thing out of my mouth was, “You’re not going to hell.” But the truth is, I don’t know where we are going. I know what happens to the human body after it dies, which is the same thing that happens to every other thing after it dies. But I don’t know if there is some kind of lingering sentience, or a soul. I know that there is no quantifiable evidence that something like that exists. However, my knowing or not knowing or believing or not believing won’t change the experience.

“I don’t know. Nobody can really be sure because everyone who would know is dead. But let’s suppose that God is real for a moment. And he made everything and all of us and he knows everything. Do you really think that God would make some of us, knowing what we would do and how we would think, and then just send us to hell? And not just a few of us, but most of us.”

He thought for a moment, concern still showing on his face and then responded with a soft, dubious, “No.”

“Well, God is supposed to love everyone unconditionally, right?”

“And God is supposed to be perfect. He never makes mistakes.”

“Yeah, if he was real. That is what they say.” Internally, I applauded ecstatically at this.

“Didn’t you and Mark believe in that stuff?”

“Yes, we did. And then we read. And we researched. And we asked questions, and we started thinking for ourselves. And I want you to think for yourself. But I don’t want you to worry about going to hell.”

“I’m not worried about it anymore.”

It was an emotional conversation for me because I remember feeling those fears and worrying about going to hell. I don’t want my son to grow up with irrational fears, and this is one less hurdle for him. Being a secular parent is difficult because you can teach your kids and counsel your kids, but in the end, they are the ones making the decisions. You can’t be there every time someone offers them some off-the-wall opinion or statement, and it is scary to think that our child has to wage intellectual warfare and have the same kind of struggles that I do, but without the knowledge that I have. He has never believed, and he doesn’t understand what it is like to believe. It is hard for me to explain to him that some people believe that crackers and grape juice literally turn into flesh and blood upon consumption, or that the earth is only a few thousand years old, or that there are evil things lurking among us waiting to take over our bodies or make us do terrible things. How do you tell your son that more people than don’t believe in things that are seemingly more farcical than the bogeyman?

It could be argued that we are indoctrinating our son, too. And I could see how it would look that way to someone on the other side of the argument, but we have science, facts, data, and morality supporting us. So, I take some pride in knowing that my son might make mistakes, but he will be one less man oppressing women simply because religion dictates that they are lesser creatures. And he will be one more human that understands the value of treating others with kindness without the ulterior motive of a plush afterlife. I realize that my son belongs to a small percentage of people that were not indoctrinated by their parents, and I hope to see that percentage increase as our children learn the value of humanism and put all notions of bigotry behind them. Humanity changes one generation at a time, and I believe that my son is definitely one generation better.

Shanon and Mark Nebo are two of my new favorite people in the world since I met them and spent a few hours with them on Sunday evening. Riffing off the “live strong” bracelet idea, they have created “be secular” bracelets. They also sell t-shirts. They let secular groups use their products as fundraising tools, splitting half of the proceeds with them. Be Secular does not just welcome atheists but is also inclusive of religious people committed to secularism. They have an impressively quickly growing Be Secular Facebook page, which you should like. If you have an atheist group, consider becoming a Be Secular affiliate.

April 4, 2013 Roger Ebert Has Died
Recent Comments
0 | Leave a Comment
Browse Our Archives
get the latest from
Nonreligious
Sign up for our newsletter
POPULAR AT PATHEOS Nonreligious
1