Mormon Apologist Uses Photo of The Dead Bodies of Lynched Blacks As A Gag Prop [Updated With Screencaps of Scrubbed Images and Comments] May 10, 2013 Daniel Fincke

UPDATE: After I published this blog post and after my commenters and I discussed with Dr. Peterson the issues in the comments section below it, he issued an apology that recognized the validity of my key complaints and, to my mind, took sufficient responsibility.

Dr. Daniel C. Peterson is a professor at Brigham Young University and a blogger on Patheos’s Mormon channel. He is tired of misinformation about Mormons. Apparently there is a popular rumor that Mormons are only charitable with other Mormons. So Dr. Peterson wrote a (subsequently redacted) post detailing various cases of Mormons investing charitably in notably big ways around the country and around the globe to predominantly non-Mormon populations, in order to anecdotally counter that charge. So far so good.

Then, in a postscript, Dr. Peterson described a credulous academic at a conference citing to him, with adamant belief, an appallingly vicious, slanderous rumor about the Mormon church, that the Mormon Church’s idea of welfare to other Mormons is to help them start businesses, but that if a business owner undergoes three bankruptcies the church demands that the business owner commit suicide. That Dr. Peterson is indignant that such a lie can spread and be blithely believed about his church is completely understandable. He has every right to push back hard against his church being accused of such monstrous behavior and against whatever climate of prejudice allows such accusations to sound credible to people who are educated enough that they should know better.

But that does not justify what Dr. Peterson went on to do in his anger.

To end the post, Peterson decided, with extreme tastelessness and racial insensitivity, to sardonically satirize the suggestion that his church seeks the death of failed business owners by using a graphic black and white image of blacks who were lynched with the caption: “‘Three strikes and yer out!’ Their corner hot dog stand failed a third time, so the members of their local church congregation got together and helped them, er, out. (The Mormon welfare program as viewed by at least one slightly deranged eastern academic.)”

This was the image he so captioned: 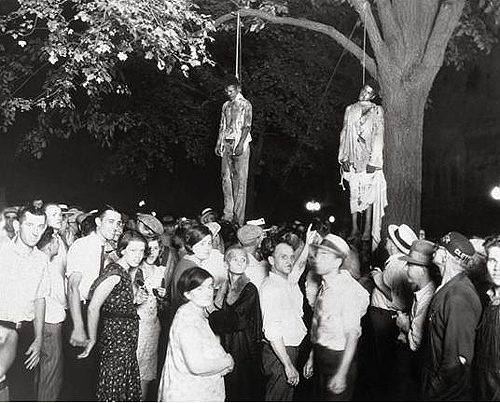 1. The notion that the Mormon church might commit atrocities against black people is not some incomprehensibly absurd-0n-its-face notion. It was not until 1978 that blacks were allowed into the Mormon priesthood. Even more horrifyingly though, Brigham Young (for whom Peterson’s university is named), according to the New York Times “deemed black-white intermarriage so sinful that he suggested that a man could atone for it only by having ‘his head cut off’ and spilling ‘his blood upon the ground'”. Last year the LDS responded to a Brigham Young professor’s controversial racial remarks by stating that “The Church’s position is clear—we believe all people are God’s children and are equal in His eyes and in the Church. We do not tolerate racism in any form…We condemn racism, including any and all past racism by individuals both inside and outside the Church.”

So, the Mormon church is adamant to repudiate its infamous past racism. Part of that means taking seriously just how grievously the church treated blacks in the past and the consequences of its contributions to systemic disenfranchisement and terrorism of blacks with its theological support. It means understanding the Mormon church should understand itself as a guilty party that is repentent. It means that it should keep in its consciousness that it has not historically proved itself a trustworthy arbiter of what is just with respect to people of other races. It means that a prominent Mormon professor should not feel so sparkly clean in his conscience that he can suggest that the prospect of his church terrorizing blacks is laughably absurd and eminently satirizable. The perception that his church is racist is not of the order of slanderously ludicrous urban legend. It is a matter of history and possible legacy. It is a recent enough history that Dr. Peterson was himself an unabashed Mormon during his church’s period of excluding blacks from the pulpits. (He received his BA from Brigham Young University in 1977, a year before the ban on black clergy was lifted.) He should not feel that either he or his church are so assumably and obviously trustworthy on racial matters to outsiders to joke about killing black people.

2. Given this history of racism in the Mormon church–and by our broader white culture in general–it is especially upsetting that Dr. Peterson can find anything funny about a picture of lynched black people. That he can expect an ironic chuckle from a gruesome picture of violently murdered people and the nonchalant looking mob that conspired in good conscience to perpetuate the crime is upsetting in itself. But one suspects that there is some unchecked racist indifference to the reality of black humanity at work here, exacerbating the problem and making it worse. Would Dr. Peterson have found the graphic and disturbing images of white murder victims humorous in a gag too? It is all too frighteningly easy for us to Other and dehumanize people who are different from us such that their suffering is just not the same as ours in our minds. It’s more abstract. More conceptual. It does not cause the same outrage, horror, and visceral disgust that preempts all “irony” and humor. I assume with full charity that Dr. Peterson would not want to imagine himself a racist or someone who is callous to others’ feelings. But I suggest he do some serious introspection about his implicit biases and lack of compassion in the darker recesses of his brain.

3. The history of black people’s oppression and images of their shackled or mangled bodies are not for your appropriation as props for your cause. What blacks suffered in this country was as cruel, inhumane, and systematic an attempt to degrade human beings as human history chronicles. Images of chained or hung black people should not be romanticized, used as political props, employed as symbols for far less serious injustices in a trivializing way, or (and this one should have been obvious) cavalierly used as ironic punchlines by white people with grudges. Using the provocatively upsetting value of images of chained or murdered black people to make people question abortion or Christianity (as an ill-considered Pennsylvania atheist group’s billboard did last year) is exploitative and trivializing and, in Sikivu Hutchinson’s judgment, participates in an  unseemly cultural pattern of objectifying black bodies in general:

The black body has always been an object of deep and abiding obsession in the American imagination.  Be it cavorting in “funky” abandon on a dance floor, vaulting off a basketball court in dunk mode, suckling apple-cheeked white babies, trotted out in a police line-up, or greased down, poked, prodded and staged on a slave auction block, the black body occupies that mystical place between corporeality and supernaturalism.

Read her whole insightful piece on last year’s offensive atheist billboard to get a deeper appreciation of the legacy of racist, dehumanizing leering at black people that Dr. Peterson’s choice of images today disgracefully participates in–however unintentionally and unwittingly insensitive we can charitably hope his mistake was.

Here is hoping that he, his church, and we as white people take more seriously our need to prove through our implicitly revealed attitudes, as much as through our explicit words, that we take the actions of repentance from, and disowning of, our forefathers’ racial atrocities scrupulously seriously.

UPDATE: In response to enough reader complaints–to which he was initially flippantly resistant–he has now taken down the offending photo and caption. Nonetheless he is quick to also point out that he is being attacked for the photo by people who regularly criticize him already, subtly and self-pityingly implying he is being treated unfairly. The rest of the post is identical to how it was in all relevant respects.

SECOND UPDATE: Now he’s scrubbing the comments complaining about the photo and his dismissals of their seriousness. I took screen captures for the record, so here they are.

THIRD UPDATE (7:37pm): He has now replaced the picture of the hanging men with the lynch mob with just a picture of a mob with torches–this one, from its title, being going after Frankenstein, rather than blacks. Here is the original image, followed by the new image, and then the scrubbed comments:

FOURTH UPDATE (5/11/13 7:45pm): Dr. Peterson has now apologized in a way that acknowledges the validity of many of the criticisms in this post. 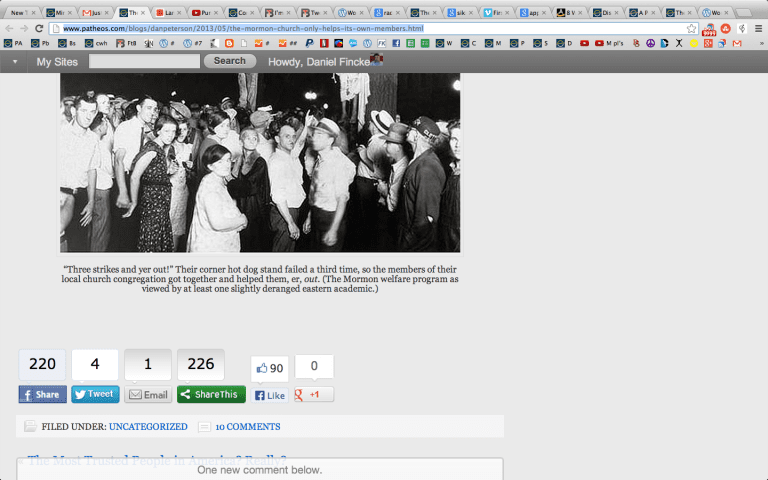 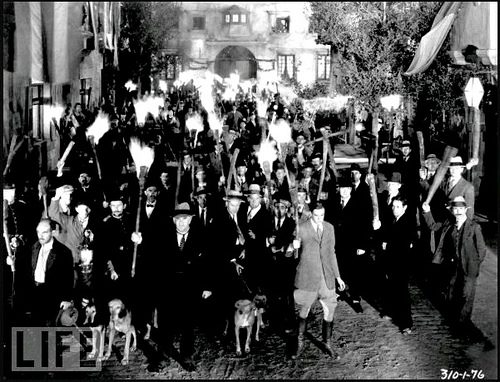 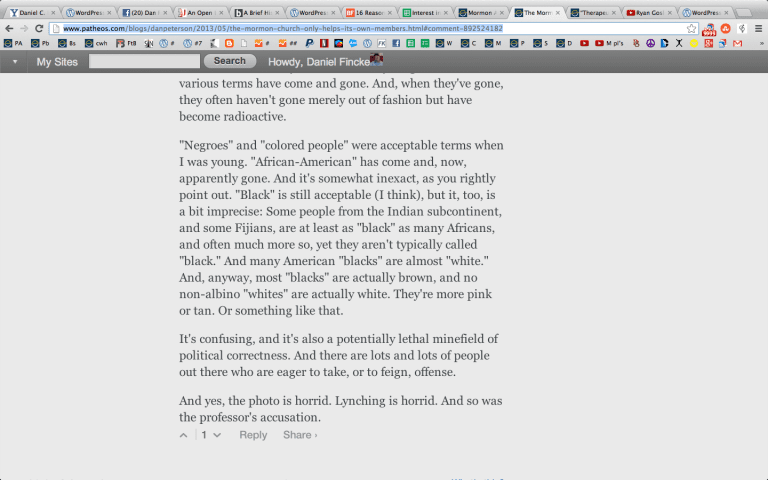 For more of my writing on what is and is not appropriate satire, see the posts:

No, Not Everyone Has A Moral Right To Feel Offended By Just Any Satire or Criticism

Bill Maher on Rush Limbaugh, Freedom of Speech, and Misogyny

For my post criticizing an atheist billboard for how it treated images of oppressed blacks last year:

May 10, 2013 Ryan Gosling Won't Eat His Cereal
Recent Comments
0 | Leave a Comment
Browse Our Archives
get the latest from
Nonreligious
Sign up for our newsletter
POPULAR AT PATHEOS Nonreligious
1

Exposed: the evangelist who was assaulted...
The Freethinker
Related posts from Camels With Hammers

Nonreligious
Why is Eric Garner's Unjust Death the Black...
Camels With Hammers