Is God Just Too Great For Our Finite Minds To Understand?

Is God Just Too Great For Our Finite Minds To Understand? July 25, 2013 Daniel Fincke

I define faith as either an explicit or implicit willful commitment, to believe, hope, trust, or be loyal to an idea, a person (real or imagined), a group, an institution, or anything else more than the rational warrant justifies and even in the teeth of superior justification for contrary beliefs or in spite of a lack of justifying evidence altogether. In reply, theists often indignantly insist that by equating faith with a species of refusal to reason properly, I am accusing them too unfairly of all being irrational.

So, last week, I pointed out a number of areas where theists, specifically Christians–but I could have chosen adherents to any robust theistic religion to talk about–disregard canons of evidence and believe with greater strength and life commitment than any rational evidence warrants in a number of fantastic propositions. These include that Yahweh, the god acting in the Old Testament, is anything like the metaphysical concept of the Ground of All Being who is omnibenevolent, omnipotent, omniscient, eternal, etc. Just thinking you can prove some metaphysical god concept is not grounds for saying that the Hebrew stories of Yahweh are at all about that being. It’s especially unlikely to be the case when Yahweh behaves flagrantly immorally (calling for genocides) and exhibits spatial characteristics (he has a body in the Old Testament and is “seen” and “heard” in various places) a temporal mind (such that he has changes of mind, expresses surprise, goes through emotional changes, etc.) If Christians are really rationally proportioning their beliefs like others do, then they would hardly be so dogmatically assertive and confident about this being whose characteristics are wholly incompatible with an eternal, perfect, ground of all being, was actually identical with that metaphysical principle. I also pointed out that there is no good reason to believe in absurdities like the existence of an eternal god that is simultaneously a temporal man. Believing in such an impossibility is not restraining one’s belief to what has rational warrant. And committing to this supposed being as the center of one’s life and commitments is not proportioning the strength of one’s commitment to belief to the degree of rational warrant for the belief in such a godman even were he to be conceptualized as minimally possible in some remote and unlikely way.

So, as should be uncontroversial, Christians do not proportion their beliefs to rational warrant. Instead they willfully commit to believing things for which they are well aware as soon as you get past the smokescreens are well beyond rational justification. It’s a misleading, maybe even willfully deceptive thing when they try to conflate all rational inquiry with their flights of arbitrary, self-serving believing as all equally “faith” as though there were no difference between restraining one’s beliefs to evidence as people do in any number of areas of life, on the one hand, and believing a set of remarkably fantastic, contradictory, unlikely, supernatural tales and imaginary concepts like everyone can clearly see religious people doing (at least when it’s other people’s religions than their own).

Now, in reply to various contradictions I raised that make the Yahweh=Ground of All Being story and the “existence of a godman” claim at least highly unlikely and at most impossible (and in either case unworthy of belief by people who actually proportion beliefs to rational warrants), I received the following familiar dodge from a commenter.

Why should God who is, as you granted in the article, “an eternal, immaterial, omnipotent, omniscient, omnibenevolent, rational designing ground of all being” have to be completely understood by you a finite material person limited in: power, knowledge, and goodness? The fact that you can’t wrap your mind around all the aspects of God isn’t suprising, and should be expected.

There is a difference between something that is more complex than we can understand and something which is outright contradictory. We might be able to say that there are things which we do not know everything about how they work but we know in fact they must work in some way because of observations that are clear to us. In this case we have a genuine mystery. We know A is true. We know B is true. It does not seem like they can go together but some deeper, rational situation about things can explain them both and we are just, thus far unable to puzzle it out. This is a genuine mystery.

But if you think you have strong rational inferences that the best explanation of the universe is that there is an eternal, omnipotent, omniscient, omnibenevolent, immutable, personal, ground of all being that exists distinct from the universe as its self-caused cause then presumably you have reasons to think these things. Presumably you must know something significant about the meaning of words like “eternal” and “immutable” and “personal” and “omni”. Presumably if you think you know enough rationally about metaphysics to say that it is the inference to the most rational explanation to say positively such a being exists and that agnostics are wrong to withhold belief and atheists are wrong to think this being doesn’t exist, then you are saying you know quite a bit about fundamental metaphysical categories.

So, suddenly, when I point out to you that what we can rationally infer about eternality precludes a fully eternal and immutable being being also, at the same time, fully a specific spatio-temporal person, you cannot suddenly say “our minds just can’t grasp such mysteries for what do we know about time and eternity?” For one thing your whole supposedly rationally temperate and careful reason for believing in God was supposed to be that the temporal cannot explain its own being without reference to a distinct being that is eternal. Now you cannot backtrack and claim that eternity and temporality are simply inscrutable and may violate all logic.

I mean, maybe you could if you had unavoidable evidence of something being simultaneously an eternal, immutable, incorporeal, atemporal being and a specific fully mutable, temporal, corporeal being. But where is this unavoidable evidence? Simply the fact that people who didn’t know the first thing about science, living in a superstitious age, deified a local preacher who did parlor tricks and appealed to their anxieties about being oppressed by the Roman emperor, and in order to reconcile the monotheism of his followers with Greek philosophy, and their deification of this human being, they devised a cockamamie meaningless idea that he was miraculously simultaneously fully a god and fully a human, fully the same being as monotheistic god and yet a different person? This belief is not some unavoidable fact that must be affirmed by a rational person if they are to make sense of experience. It is a piece of nonsensical, religious propaganda with no basis in fact, and which you would readily dismiss out of hand were you not raised in a culture that pressures you from numerous angles to worship and deify him.

Similarly, there is no puzzle about how Yahweh of the Old Testament can be simultaneously omnibenevolent and a commander of vicious genocides for the sake of assuaging his petty ego. The answer is simple. Yahweh is not a morally perfect character. He is the projection of an ancient people with barbaric tribalistic genocidal values. He has nothing whatsoever to do with moral perfection. That’s the simple, rationally likely answer. That is far more plausible and justified than that somehow an omnibenevolent expressed itself genocidally or was “misconstrued” to be genocidal by the very same people who supposedly were reliable authorities that he was the ground of all being intervening in history.

Why in the world are the ancient Hebrews assumed to be are reliable guides when claiming that Yahweh is the supreme being that created all things? Where is the slightest evidence you’re rationally proportioning yourself to scrupulously that they among countless ancient mythmakers identified the true creator’s true interactions with the world? Why is this assumption held to? Where’s the careful rational proportion of beliefs to evidence in clinging to this belief? Reason can conclude simply that even if there was a ground of all being it is not the kind of thing that goes around commanding genocides. It’s likely, if anything at all, an unthinking metaphysical principle that does nothing so personal as that. It’s likely no more personal than gravity or electromagnetism or abstract objects like the numbers. In order to vouchsafe Yahweh as the omnibenevolent personal ground of all being one would have to reconcile genocide with morally perfect goodness. But there is no good reason to assume that Yahweh is at all ground of all being intervening in history. Rather, it is simpler to just jetison the belief in Yahweh as the ground of all being.

That’s what rationally honest people do.

But people of faith, they pretend that the bare possibility that we might not understand things is a good reason to continue believing an implausible, and I would argue impossible, proposition and continue to redefine words to hang onto centuries old beliefs that had no basis in the first place and are false on their face in the 21st Century to anyone who was not intensively indoctrinated in a culture that reveres them.

For much more on the problems with the very idea of God, see my post Examining Some Alleged Divine Attributes.

July 23, 2013
Love Is Not An Illusion. Rebutting Nihilism and Other Superstitions of Disembodied Atheism
Next Post 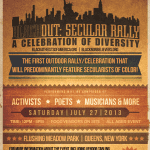