It’s About What The 1st Amendment Should Mean

It’s About What The 1st Amendment Should Mean July 28, 2013 Daniel Fincke

James Croft perfectly makes a few points about American Atheists’ and Freedom From Religion Foundation’s criticisms of the proposed Holocaust memorial using the Star of David:

Even if there was a constitutional problem with the memorial, I would argue that that would represent a problem with the our interpretation of constitution, and not with the memorial. I  do not believe that we should seek a form of secularism in which the government cannot memorialize victims of an attempted genocide by using a symbol of the oppressed people simply because that symbol has a religious meaning.

If we were to imagine a genocide in which the victims were entirely members of one religious group – let’s imagine a religious group which is not also an ethnic group, to make the thought experiment clear – I would consider it entirely legitimate for the government to memorialize that event by funding and building a monument which prominently displayed the symbol most closely associated with that religion. Memorializing an event which is closely related to a religion by using the symbol of that religion is not the same as promoting that religion, and the state has a legitimate secular interest in educating about past atrocities for the purpose of encouraging ethical consideration and development.

Ultimately, while I want to live in a secular society, I also want to live in an intelligent, thoughtful, historically-literate society which is capable of recognizing the difference between promotion of religion and memorialization of an atrocity. In this instance, the historical context of the Star of David, its history of use as a symbol of a persecuted ethnic group, and the educational value of memorials of this sort, override the constitutional concerns raised by the FFRF and its supporters. Even if it turns out a constitutional challenge were valid, I would oppose that interpretation of the constitution. This is another battle we should not be fighting.

Exactly. For more context and argument, read his entire post.

When I talk about what the 1st Amendment means I talk about what it should mean morally. And I am opposed to the atheist movement indiscriminately pursuing just whatever opportunities it can find in order to legally constrain references to religion or expressions of it just because we can figure out we might be able to on technicalities. As I have argued to religious people who want to exploit rulings on the 1st Amendment however they can in order to entangle religion and government, just because you can do something legally does not mean you should.

I don’t write as a lawyer or a legalist interested in gaming the law on technicalities (unless that is the only way that the morally just outcome can be maneuvered into reality). I write as a moral philosopher. I write as a humanist atheist interested in promoting humanist communities, an overall humanist culture, and an adamantly secular state that makes laws only on secular grounds, employs no religious rituals or invocations, and which is as neutral on the worth of religions as possible. I am primarily interested in what the 1st Amendment should be interpreted to mean, and not limiting my discussions of it to what it has been interpreted to mean or might be interpreted to mean in the future as though these are the final words on its meaning. I think that if the atheist movement shows that it is willing to legally stamp out any religious symbols or expressions whatsoever that it can– rather than just scrupulously make sure that the government is not endorsing, promoting, or imposing either a specific religion or the value of religiosity in general–then the movement will be seen as more about power plays than principle. We should not want to be seen that way. We should not be that way.

Finally, even though I am not an establishment clause scholar, I do think based on what I know about the law and precedence and on my consultations with a couple experts in this area that FFRF would lose were it to oppose this monument. And while I think the FFRF should lose a case if they bring it, I fear that the opinions against them could be more broad and overreaching than the reasons I think it should rightly be opposed for and set bad precedent that hurts our secularist goals on the long term. And the potential damage to the reputation of the atheist movement could be substantial if this story becomes a national narrative. We shouldn’t risk either the bad press or the bad precedent.

For more on this issue and my views on other 1st Amendment and secularism issues, see the video debate I organized with a number of passionate and articulate activists and then a links to more of my articles below: 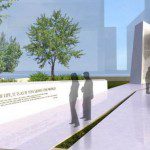 July 27, 2013
Memorializing Ethnic Jews With The Star of David Is NOT Imposing Judaism or Religiosity on Non-Jewish Americans
Next Post

July 30, 2013 Be Secular Interviews, Mandisa Thomas Black and Me
Recent Comments
0 | Leave a Comment
Browse Our Archives
get the latest from
Nonreligious
Sign up for our newsletter
POPULAR AT PATHEOS Nonreligious
1

The Entirely Unsurprising Sexism That Russell...
Roll to Disbelieve
Related posts from Camels With Hammers