I Read Nietzsche As A Philosopher, Not Only As A Historical Scholar

I Read Nietzsche As A Philosopher, Not Only As A Historical Scholar July 20, 2013 Daniel Fincke

Reading Nietzsche was instrumental in my deconversion from Christianity while I was in college. Afterwards, I went on to write my doctoral dissertation on Nietzsche’s philosophy. This blog is named using allusions to images in Nietzsche employs that resonate with me deeply. My philosophical views are so thoroughly influenced by Nietzsche that trying to determine clearly what I owe him and what I don’t among my ideas would be nearly impossible for me to do.

And yet, when doing philosophy, especially since moving on from the first four chapters of my dissertation, I freely think for myself, diverging unhesitatingly from Nietzsche when the best chain of reasoning I can see leads me away from him. But some of the places where you will see me diverge from the letter of Nietzsche’s texts I am doing so in order to make the points he wanted to make but in a way that is stronger and more technically careful and consistent. In some places I imagine Nietzsche the historical figure, were he to be reanimated, would viscerally reject what I would say, but at least in some cases I think I am doing better justice to what he was onto than he himself did. In other places, I unapologetically and straightforwardly am disagreeing with him. And in any number of other places I probably differ mistakenly because, despite regularly reading him for 14 years, I have sill failed to plumb the profundity of a given idea, or because I fail to remember any of a myriad nuanced insights he provides across thousands of pages of philosophical writing, or because I fail to have the courage to adequately confront some dangerous or unpleasant truth Nietzsche was not bashful about forcing us to look at.

And sometimes I reject Nietzsche’s ideas or formulations of them for the simplest of all reasons. I just think I have excellent reasons to think Nietzsche is essentially wrong or, at least, deeply questionable.

So when I interpret Nietzsche here on Camels With Hammers I do not treat Nietzsche as an infallible and unchallengeable source of truth and wisdom and guidance. I do not whitewash the ugly parts of his texts or try to deny all trace of tension between his thought and mine.

What I always intend to do is show you what I think is the systematizable philosophical core of his thought. I basically attempt this through several steps:

1. I grapple conscientiously faithfully with the words of his texts, talking about what he probably meant by them and imagining what he might say were he reanimated and a direct question put to him. I do this by reading texts in light of what he says elsewhere and what I sense are his ultimate motivations and central recurring themes.

2. I make no bones about explaining what I think is the best way philosophically to interpret his texts in terms of his overall philosophical goals and themes so as to make them most successful as attaining the truth and as having potential relevance to contemporary debates and to my own thinking. As part of this I am not shy about employing my own or others’ creative, consistent, coherency creating conceptual frameworks that Nietzsche the man, were he reanimated, may or may not approve of but which nonetheless would aid his philosophy in being more comprehensive, truer, and more capable of contributing to contemporary discussions in a robust and up to date way.

3. I talk about the ways and the reasons that I think we should diverge even from the best philosophically interpreted Nietzschean ideas and I note places where I think the historical Nietzsche thought things (or would have said things) that I simply think are wrong, cannot be much improved for contemporary use, and/or cannot fit with a philosophically coherent system and so should be rejected to one extent or another.

4. I explore my own ideas inspired by my engagement with Nietzsche, on my own terms and in a way that makes no effort to reconcile them with Nietzsche’s thought.

Not every post on Nietzsche necessarily features all these components. Different posts do different of these things in different orders and in different ways. But these four basic components are what you should regularly expect from “Nietzsche Saturdays”, the new series of weekly posts delving into Nietzsche that I have recently promised to write. The posts will not be simple attempts to understand what Nietzsche meant to say or would say and stop at that. Faithful, careful, responsible reading of his intended meaning will always be the foundation of these posts. But then they will try to make the most systematic, living philosophical sense of what he says even where this involves some more philosophical creativity and originality and less “reading Nietzsche’s mind”. Then we will straight on take seriously the sometimes deeply provocative and even dangerous questions and suggested answers that he raises.

I also should note that Nietzsche was a self-consciously and deliberately temporal thinker. He did not presume to give (or to be able to give) the final word in all things and he explicitly called for future philosophers to do their own acts of creation. There are cases where I see his rhetoric and his condemnations of philosophers and his emphases and his framings of conflicts and even some of his philosophical positions as colored by the late 19th Century situation he was in and that one hundred twenty years of history and changes in science, social science, and philosophy make significant differences. While I think he is still deeply relevant as many of his questions are still important and unanswered and many of his suggestions still not fully explored for their full value, there have also been improvements and evolutions in knowledge fields that make different kinds of rhetoric, questions, framings, accusations, and truths better now than they were then. A lot of things simply are better off shaded differently or with more nuance for a much different time in history.

It would be outright unNietzschean and bewilderingly naive to ahistorically to take everyone of Nietzsche’s pronouncements, moral judgments, diagnoses of culture or the sciences, etc. as eternally valid. Much is still staggeringly fresh and prophetic. That’s why I want people to pay so much attention to him. But neither are all of his propositions nor accusations timeless.

As a student of Nietzsche I was uneasy and unsatisfied with so much Nietzsche scholarship that dispassionately explicates any number of disquieting ideas Nietzsche advances and then ends without answering any hard questions about the truth or goodness of what he has said or how any of it reconciles with the scholar’s own personal philosophical views. I understand the virtue of such non-judgmental scholarly detachment and far prefer it to the writing of people who prove themselves incapable of understanding another’s thought without injecting their own emotions and moral judgments about it or, worse, letting their emotions and moral judgments read everything in the least charitable way possible. I am deeply committed to the principle of charity, even with ideas we find questionable.

But I also personally resolved while writing my dissertation that explicating and advancing discussion of Nietzsche’s thought gives me an ethical responsibility as a philosopher to go beyond being a careful scholar and additionally publicly address my reasons for either embracing, rejecting, or simply being cautious about the substance of what Nietzsche is saying. As a scholar I feel impelled to tell the truth about what Nietzsche really says, even when it’s terrible. And as a philosopher and a human being I feel responsible to not simply defer judgment about what he says to others but to engage with it seriously and as though it were a matter of important consequence.

So in coming weeks I hope to lay out my overall picture of what Nietzsche is saying about morality and truth and other pertinent matters, to dig into texts I simply find interesting, and to reconcile my reading of Nietzsche with texts which, at least prima facie (and sometimes in fact) contradict that reading. Readers are invited to suggest good examples of difficult texts for my reading of Nietzsche to reconcile. I am excited that a couple of readers have submitted excellent, difficult texts that I will get to in the coming weeks.

In the meantime, for more of my theory of how to interpret dead philosophers in general–which philosophy I reflectively developed in no small part through interpreting Nietzsche for years–read my post from this past Wednesday on what reading charitably entails and on the difference between reading a thinker philosophically as opposed to just psychologically and historically.

To catch up with what I have already explicated of Nietzsche’s philosophy on Camels With Hammers in my posts directly about him see the following posts:

A Brief Overview of My Dissertation
4 Kinds of Irony and Nietzsche. An Excerpt From My Dissertation
Nietzsche’s Immoralism As Rebellion Against The Authoritarian Tendencies Of Moralities
Nietzsche: Moral Absolutism and Moral Relativism Are “Equally Childish”
Nietzsche: “‘Good’ Is No Longer Good When One’s Neighbor Mouths It”

Nietzsche: We Cannot “Selflessly” Investigate Morality
Mostly True Not Mostly False
Evolution and Epistemology
Rough Sketches of Nietzsche’s Politics and Philosophy of Religion
On Zealously, Tentatively, and Perspectivally Holding Viewpoints
Nietzsche on Freedom and Autonomy
When I Deconverted: I Was Reading Nietzsche’s “Anti-Christ”, Section 50

How I Deconverted: Nietzsche Caused A Gestalt Shift For Me (But Didn’t Inspire “Faith”)
Why Camels With Hammers
Apostasy As A Religious Act (Or “Why A Camel Hammers the Idols of Faith”)
In Memory of Christopher Hitchens, A Nietzschean Lion
After My Deconversion: My Nietzschean Lion Stage of Liberating Indignant Rage

If you’re looking for a book introducing Nietzsche’s thought, the best entrance point in print I know of is Lawrence Hatab’s Nietzsche’s ‘On the Genealogy of Morality’: An Introduction (Cambridge Introductions to Key Philosophical Texts)

. I loved Richardson’s book so much I asked him to be a reader on my dissertation, which to this day I am amazed and grateful to say he agreed to do.

July 19, 2013
Philosophical Advice for a Procrastinating Graduate Student
Next Post 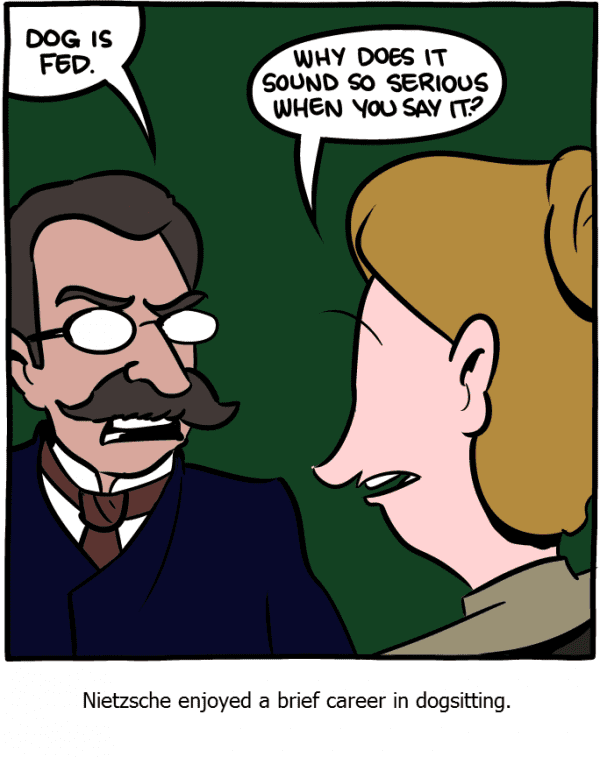